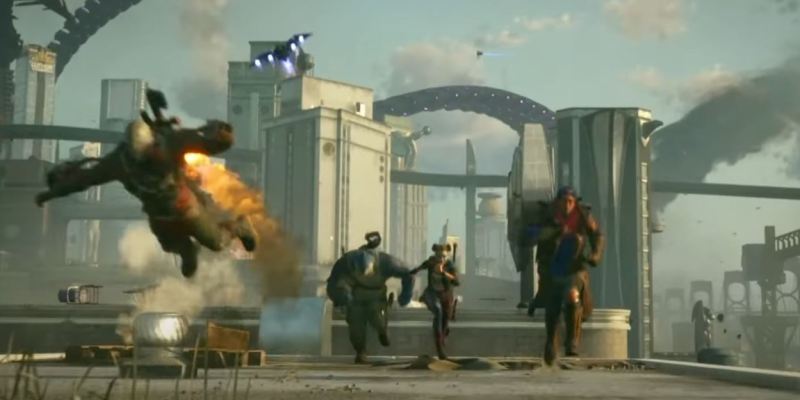 It feels like it’s been forever since we’ve seen any gameplay from Rocksteady, which hasn’t released anything since 2015’s Arkham Knight. It was announced a while back that the studio was making a Suicide Squad game, but we didn’t have much idea of what the game would look like when it finally showed up. Now we must wonder no longer as Suicide Squad: Kill the Justice League received its first gameplay trailer during tonight’s The Game Awards. It’s quite a treat to behold the fruits of Rocksteady‘s labor after all this time, as we’ve been looking forward to this one.

The trailer kicks off with some cinematics showing the characters in action. Characters include Captain Boomerang, Harley Quinn, King Shark, and Deadshot as they run on a rooftop and tangle with The Flash. Before long, we get to see the actual gameplay, such as Captain Boomerang whizzing through the air before sliding on the ground and firing rounds at enemies. Suicide Squad: Kill the Justice League is stylish and looks to be an exciting continuation of the Arkham games. The trailer is action-packed and shows quick cuts of all four characters in action, along with King Shark slamming his weapons into foes and Harley Quinn bouncing in the air after swinging her bat.

Suicide Squad: Kill the Justice League has quite the premise. Set in the aftermath of Arkham Knight, Brainiac has invaded Metropolis and used his mind control abilities on Superman, The Flash, and The Green Lantern. Our anti-heroes have been tasked with taking them out of the picture and reducing Brainiac’s fighting strength. The game can either be played solo by switching between all four characters at will or cooperatively by four players online. The game has a release window for 2022, so our eagers are eagerly sitting on the ground for more reverberations.

Destiny 2: How to get the Gjallarhorn Catalyst