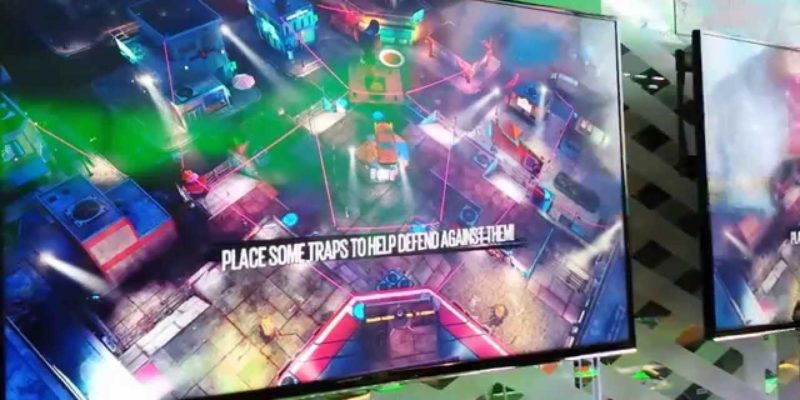 “We’re a shooter and we don’t give a shit what other people think.”

That’s the general essence de overdrive that wafted in my direction as I waited for hands-on time with the blatantly bold action-shooter, Sunset Overdrive. The game heavily relies on its quirkiness and gun flagrance to paint quite the picture. So, how does this game stack up beyond just looks alone?

The mode that we played was Night Defense. The goal here is to defend your Overcharge Vats as enemies attempt to destroy them in waves. Each wave becomes more challenging, providing for a test of both experience and minimal level of teamwork. There wasn’t a time during the demo that it became necessity to work together, only when another teammate was being hammered or a vat was being attacked.

The controls of the game are simplified and for heavy reason. With such commotion to be attended to on screen, there isn’t much time to dilly-dally with weapon customizations or look into a given set of perks/abilities. Although, it does look as though weapon customization will become a big part of collecting items and creating new ones. The (RT) shoots, (B) melees, while the (LS) and (RS) provide traditional controls for camera panning and character movements. However, when it comes to the (A) button for jumping, there is a little bit more flare to be called upon.

The incorporation and emphasis on agility can be seen in the early E3 trailer for the game. This is one area where Sunset Overdrive looks to separate itself from the crowded market of first and third-person shooters as the majority of the terrain can be climbed, jumped on, or become a quick grind sesh. The action picks up quickly as you aim towards enemies atop power cables and rooftops. However, during periods of grind-time, there weren’t any instances where it felt as though I was losing or couldn’t maintain controls due turns and jumps. The mechanic really stitches combat and mobility into an almost seamless blend of action.

While the control scheme is uber simplified, there is a ton of weaponry to choose from to give the game a little bit more substance in the combat department.

The (LB) brings up a scroll wheel that houses all of your weapon selections. In the Insomniac Games fashion, there are a ton of oddball firearms. There are heavy hitters like the TNTeddy, which describes itself as a “Grenade Launcher+Teddy Bear.” Others out there, like the Freeze Bomb, provide a nice shade of humor, being created by combining “AQE+ That “Let it Go” Movie.”

Guns aren’t the only thing that go “boom” in the game. Explosions fill the screen with splatters of blood, limbs and propane gas. During the multiplayer match, there was a portion where we were able to set traps. They could only be set/moved to certain areas and were used as defense mechanisms against the armies of FizzOne mutants. Even with the explosions, enemies, teammates, traps, and point indicators, the game played without any noticeable hiccups. There were no frame-rate drops and, in terms of graphics, was already polished in its current state.

At this point, I can say that Sunset Overdrive is living up to its hype. It’s a mix of Dead Rising, Ratchet and Clank, and maybe a little Jet Grind Radio. It was actually a lot of fun to jump into something that didn’t take itself so seriously, yet still provide a gruesomely bloody experience with deadly mutants at its core. The agility aspect works well as almost everything can be vaulted or grinded on.

I suppose, if there were a fun, third-person DOOM, this would be it.

Zynga CEO Mattrick Rewarded $57M, Even Though Stock is down more than 21%