The indirect star of Tale of Tale’s Sunset is its elegant 1970s penthouse apartment setting. Games which portray their living spaces as, well, lived in, are always welcome around my hard-drive. The well-stocked kitchens, top floor bedrooms and architectural sensibilities behind the mansions in games like Thief: The Dark Project create a stronger sense of illusion than some of the film set prop design found elsewhere in the medium.

I know full well that that the restless South American city shown through Sunset’s majestic, high-rise windows is just a facade. Just as I know that Thief’s city doesn’t really extend anywhere outside the grounds of each stately home. But the deliberate period detail and signs of life (even in absentia) present in Gabriel Ortega’s home make it easier to suspend of disbelief. 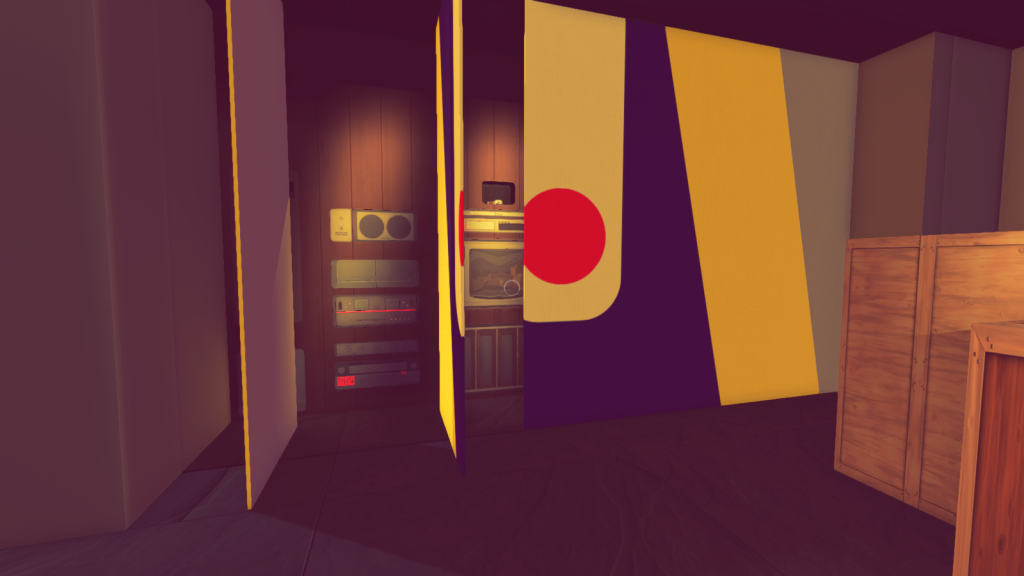 As if this wasn’t enough art, music and technology in one place already, the record player has an Austin Wintory track on it.

Tale of Tale’s back catalogue (The Graveyard, The Path) is one filled with high-concept games which stage narrative situations and allow players to fill in multiple blanks. It’s a post-modern, Roland Barthes style approach, and one which has proven to be anathema to parties who believe the medium’s strengths lie in systems and mechanics. Sunset does possess systemic interaction with in-game objects, as well as traditional wasd movement, but it’s unlikely to be the break-out title which crosses that particular ideological divide. Nor does it necessarily have to.

As American tourist turned temporary housekeeper Angela Burnes, players get to explore Ortega’s home and communicate with him at a distance through notes dotted around the abode. On each in-game day, Burnes arrives at the penthouse one hour before sunset and has a straightforward list of tasks to complete before 6pm hits. Empty some ash trays, tidy up a room; it’s a pretty light work-load, but she’s only up there for an hour.

Every task in Sunset has a “warmer” or “colder” option, which is sometimes just a matter of how much effort the player thinks Angela should put in (empty the ash trays, or empty them and put them away) and sometimes something slightly more allegorical. Given the job of covering up some figure-like sculptures, Angela can either drape a tent-like sheet over the lot of them (the warm option,) or place them under individual covers (the cold one.) In the context of a warm/cold dichotomy (and against a backdrop of revolution,) this is presumably alluding to themes of collectivism and society, versus individuality and isolation.

Or it might just be because people can stay warmer when huddled together. The literal option. 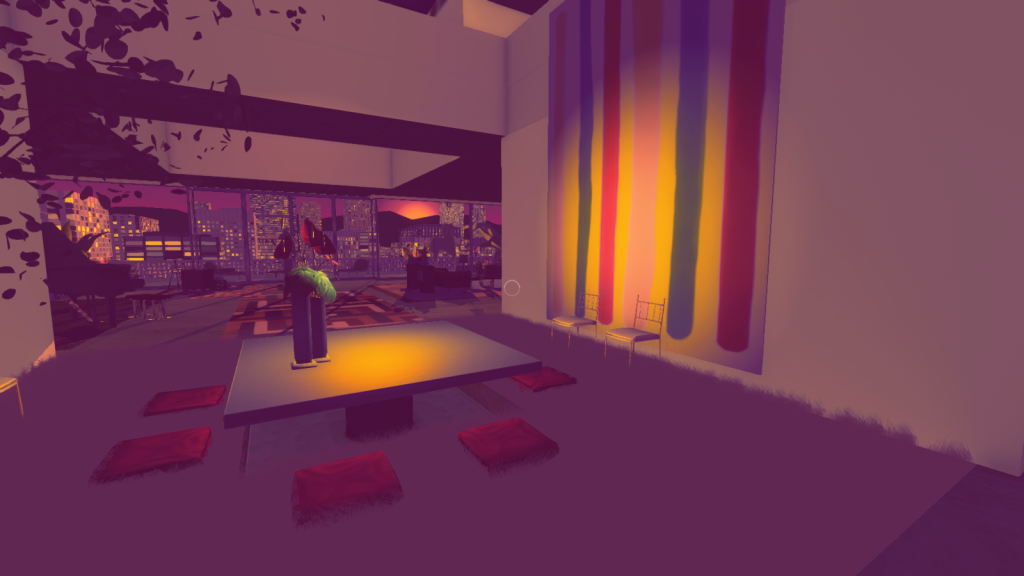 The later it gets, the more purple begins to creep in.

This brief press build was a fragmented sequence of three in-game days plucked from the early, central and late points of Sunset, so some of the activities were a little shorn of context. It’s a game where the narrative is already abstracted to some degree, as Angela and Gabriel never seen to directly interact and the flow of the rebellion against General Ricardo Miraflores is well outside of the player’s control.

Due to that, I don’t really know the extent to which doing things warmly or coolly will change the layout of the penthouse or interactions with Ortega. It’s actually possible to leave the home without doing any of the assigned tasks at all, which you’d imagine would eventually start having some kind of effect. Like redundancy. Or a much more sarcastic tone to the notes, at least (early on there’s one on a painting which says “stop looking at the art and clean my house,” which bodes quite well for this avenue.)

Having played through a couple of times, I did spot a few specific changes resulting from my actions. Moving the Queen chess piece (warm) on Gabriel’s board apparently led to him arranging all the other pieces around the outside of the board on a later day. Moving a Pawn (cold) saw him just matching my move with a Pawn of his own. There’s probably enough symbolism there to fuel a semester or two on literature, if you wish to look for it. 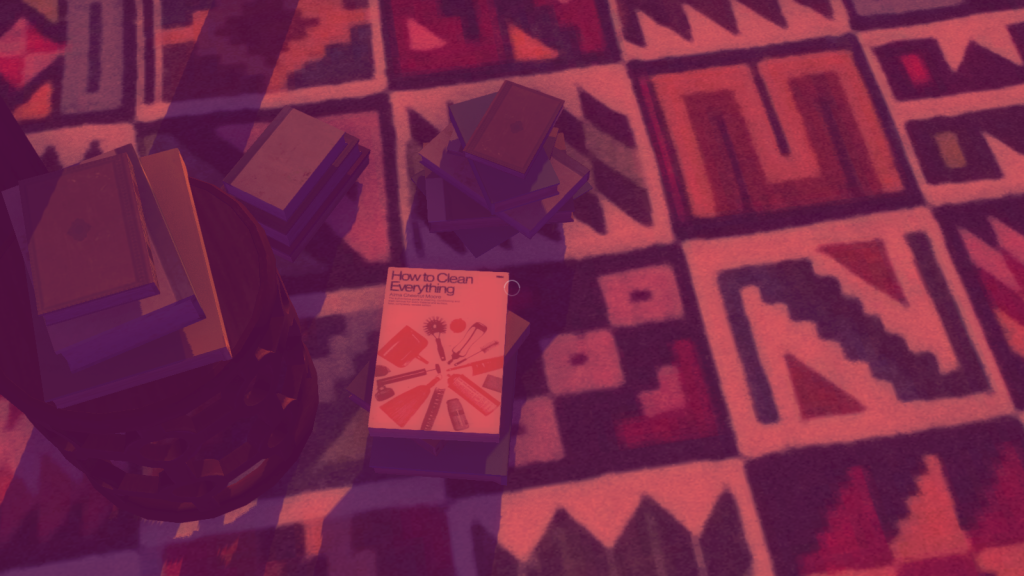 This seems quite passive-aggressive. Fancy carpet though.

“If you wish to look for it,” is really the important phrase for most of these exploration-based games. They’re about introspection, and a willingness to engage with the environment. Most of my enjoyment in this preview came from wandering around, looking at Ortega’s art, consumer goods and other paraphernalia. Basking in a colour-scheme which always begins at 5pm with the same orange and brown tones as a 13th Floor Elevators album cover (that’s 1967, but close enough) then gradually creeps through the colour spectrum into deeper reds and soft purples as sunset comes around.

During the earliest day, these idle investigations into 70s record players, piles of books and stylish staircases were suitably relaxed. Later on, as the sounds of rioting and distant gunfire rose from the streets below, a large military helicopter appeared at the penthouse window. It seemed to be observing me. On the final preview build day, I was poking around the study when a huge, nearby explosion rocked the apartment. After that, I was far more uneasy. Under scrutiny and in potential danger, Ortega’s home felt a lot less inviting.

Sunset’s later days imply that Angela gets herself indirectly involved in the revolution. At some point in the game’s progression, Ortega’s house fills up with boxed possessions. They may be his own; a sign that he’s ready to move out if necessary. Or he may be hiding items on behalf of other people. I wasn’t able to shed much light on this, even by literally switching on all the illumination in the house (which apparently counts as a warm action, rather than wasting electricity during a time of great strife.) 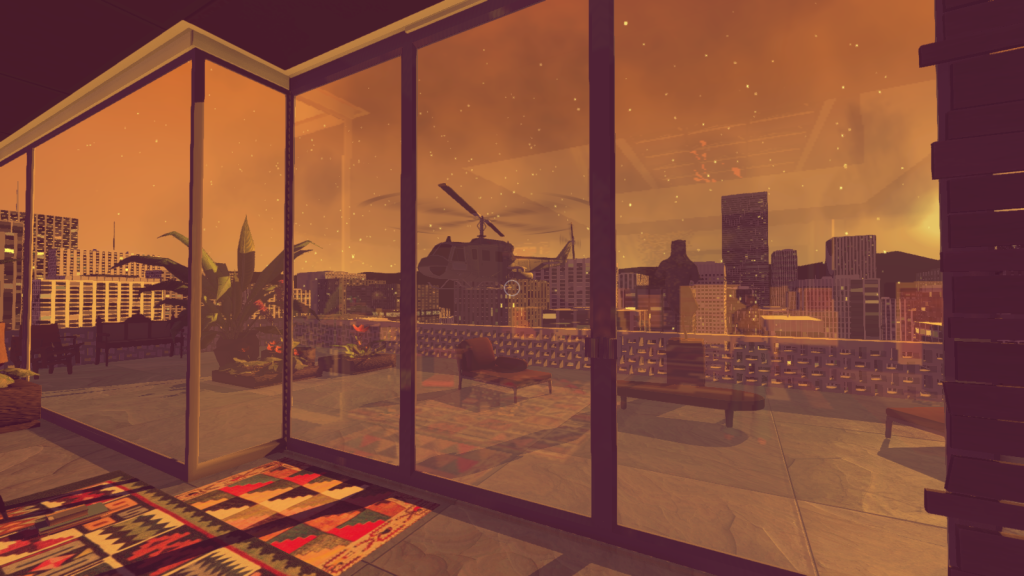 Gabriel Ortega’s apartment is the location through which Angela can observe and learn about the state of the revolution, an apparently tone-perfect 1970s living space, and the method through which the player communicates with her absent employer. Though not the largest area (it’s two floors,) the layout changes in ways that are both subtle (through player action) and dramatic (through narrative progression.)

Sunset is unlikely to win over the players who’d rather be in the city’s revolution-infused streets than pondering 1970s design work high above them. But Ortega’s swanky pad will welcome those whose minds have ever wandered into homes that simply line the avenues in other games of warfare.

Overclocking Support Getting Booted Out Of Nvidia GTX 900M

The Sims 4 Now Available On Mac, Cross-Buy With PC

By Jason Rodriguez23 hours ago
Previews