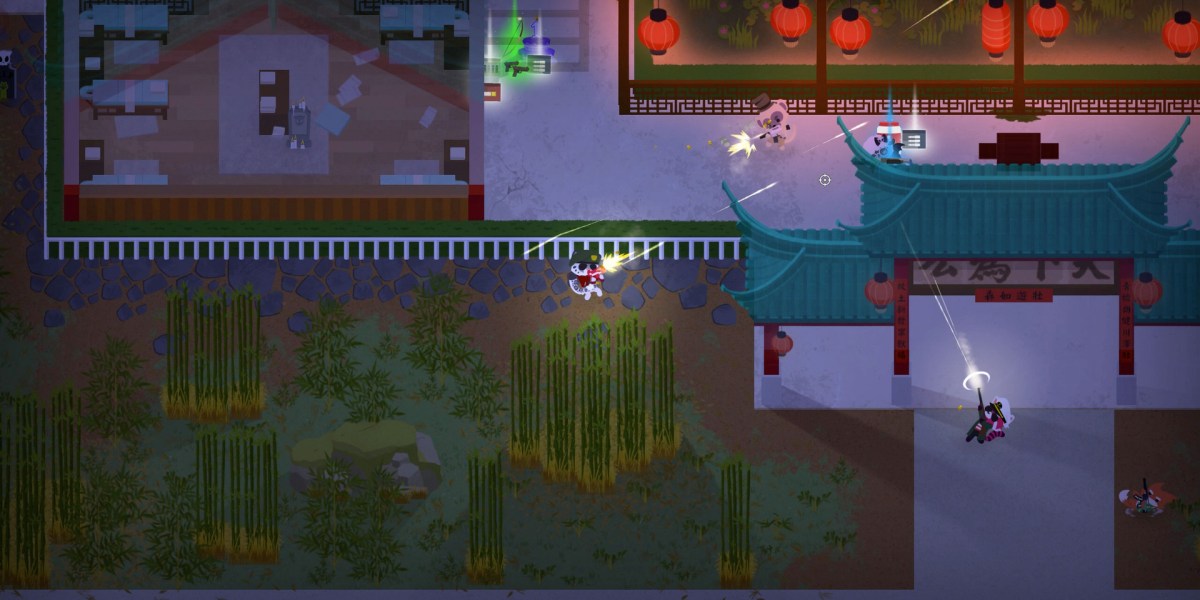 Super Animal Royale just surprised players, leaving Steam Early Access after two and a half years with version 1.0. With the battle royale’s launch, I was invited to check out the cute killers in action and see if I could rumble in the jungle. I’ve had my eye on Super Animal Royale for some time, so I jumped at the chance to review it.

Super Animal Royale doesn’t take itself too seriously. It’s hard to when the players running around are cute animals with whacky costumes and, sometimes, even crazier weapons. However, it does what it sets out to do very well. And that is giving players a competitive battle royale experience in short, explosive bursts.

The mechanics of Super Animal Royale are straightforward. If you’ve played any kind of battle royale before, you’ll get the hang of the looting in no time. As for the shooting, it’s more like an old-school, top-down shooter. Your crosshair determines which direction your character looks and shoots, while you move around, dodge, and use items with your keyboard controls.

It took me a few rounds to get the hang of moving my crosshair and character independently. However, once I acclimated, I thoroughly enjoyed the style. It’s far more accessible than a first-person shooter. So, players who are intimidated by other battle royales might find they enjoy Super Animal Royale a lot more. I would highly recommend you give it a go.

Here’s me showing off my terrible crosshair placement before I got the hang of it.

One of the most pleasing aspects of Super Animal Royale is that matches don’t take very long. The phases are short, and the gas circle closes quickly. However, moving at max speed with dodge rolls will allow you to mostly keep pace with the closing zone too — a good piece of game design. You can also use one of the game’s quirky vehicles — the hamster ball or giant emu — to really get rolling.

The rapid-fire pace of games extends to queue times, too. The time between dying and being back on the ground with a gun in your hand is a couple of minutes. This means you don’t need to fear death as much as in other battle royales, because you haven’t invested as much time into looting. You don’t get as frustrated when you die, so you feel more free to go about hunting the other cute animals trying to kill you. I can’t stress enough how much this takes the pressure off Super Animal Royale gameplay, leaving you to just enjoy yourself.

The time to kill in Super Animal Royale is surprisingly short. In my book, that’s a good thing. You don’t spend ages trying to kill one person. Instead, you see each other and the hunt is on, and your choice of hunting weapons is vast. There are pistols, shotguns, SMGs, rifles, sniper rifles, bows, and a dart gun that ignores armor. You also land with a melee weapon that could be anything from the starter katana to a lollipop.

The variety in weapons gives you a lot of freedom to play how you like. It also gives you plenty of options if you need to adapt to the landscape. For instance, shotguns are really good in confined spaces — one or two clicks and the enemy is a tombstone. Whereas outside, the dart gun is awesome.

You can also pick up a range of grenades to help you secure victory. There are the standard frags, but there are also bananas that cause players to slip and be temporarily disabled, and skunk bombs that cause temporary gas circles. Sounds a lot like the new PUBG Blue Zone Grenade. And here I thought Krafton was being original.

Got ’em with the double banana.

There’s no tutorial to help you get acclimated with the gameplay or familiarize yourself with the weapons and gear you can use in Super Animal Royale. You will get some tips to help you move, shoot, and loot, but that’s about it. For the weapons, it doesn’t really matter. Part of the fun is learning how each one works.

For some of the power-ups, though, a little more help would have been nice. I had to leave the game to go and find out what a Banana Forker does — I don’t have one lying around at home, you see. But that is really my only complaint about Super Animal Royale. And it’s not a very big one.

An ark load of animals

Battle royales typically have additional pursuits for players to chase, usually cosmetics of some kind. In Super Animal Royale, you have Milestones and the Research Lab. These are two different systems that allow you to work towards new animals, clothing, and weapon skins. And they never expire. You can always work on them. 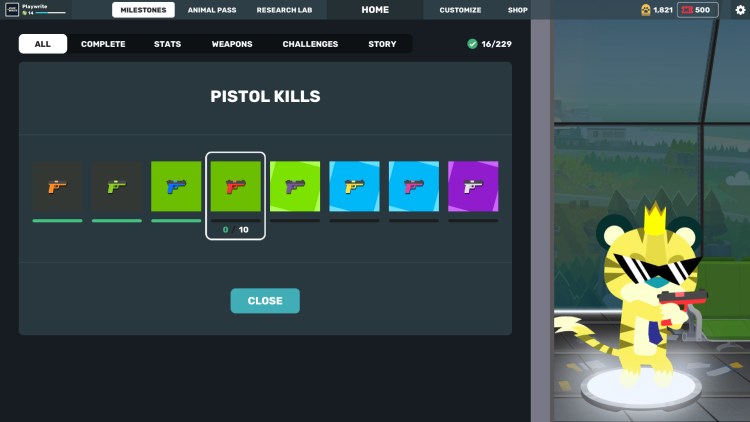 Milestones are simply tasks you need to complete to unlock a new cosmetic. The variety of Milestones you can chase are wonderful; some just want you to play games. And the more you play, the more skins you’ll get. Others require you to get kills with specific weapons. In return, you get new skins for that weapon. Some are incredibly challenging, like winning a game with no armor or with just a melee weapon. Running around with those cosmetics gives you some serious street cred, though.

The Research Lab is where you unlock more murderously cute animals. Each match you play will reward you with Animal DNA for a specific animal type and Super Serum. Once you collect enough Serum and DNA for an animal type, you can create one of the skins in the family. These systems are excellent, because while you’re working on improving your aim, you’re working towards other things too. It’s a win-win. 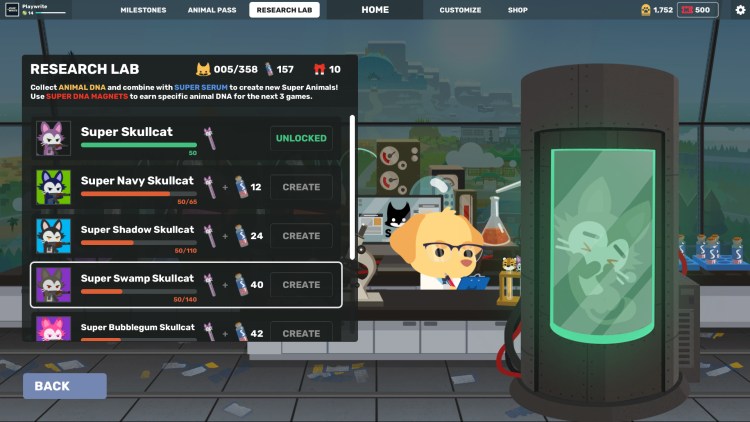 You can choose between a number of Super Skullcats in this option.

On top of that, you also collect Carl’s Coins after every game. This in-game currency will let you purchase cosmetics from Carl’s Cart. There are only a few in there, but I imagine they change from time to time. You can also purchase a battle pass if you want to earn some limited-time cosmetics.

The battle royale for all

If you’re looking for the next PUBG or Apex Legends, this isn’t it. Super Animal Royale is a different beast. It’s a lot more welcoming for casual players, but it has a lot for veterans to pursue as well — usually in the form of a wildly difficult challenge for a unique cosmetic. Matches are short, mechanics are easy, and the gameplay is fun. Plus, it’s free.

I don’t think I’ll ever uninstall Super Animal Royale from my PC. And I think you should install it on yours too. It’ll always be there if you have a few minutes or an hour to kill. You’ll never regret dropping into Super Animal World.

Super Animal Royale is available for free for PC players through Steam. It has some paid DLC you can purchase, but they will only give you cosmetic content. There’s no pay-to-win here. 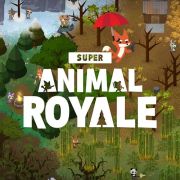 Super Animal Royale is a wonderfully fun battle royale that is very welcoming of casual players. Combat is fast, and the mechanics are simple. You'll never be left wondering what you did wrong. You just need to click on bad animals. Matches are short and you don't spend a ton of time looting, so the fear of death is much lower than in other battle royales. Super Animal Royale is the kind of game you should always have on your PC.

The Crysis Remastered Trilogy will be an Epic Games Store exclusive