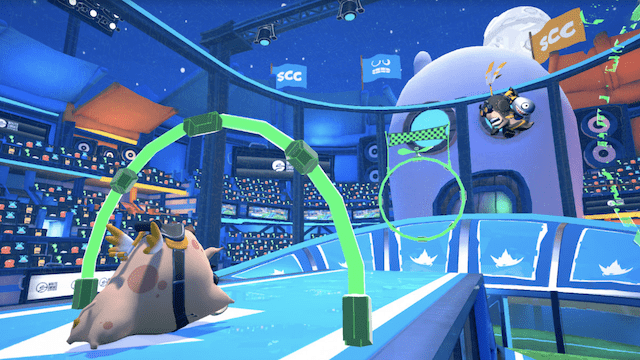 Ever want to become the champion of a sport called Cluckball? Here’s your golden egg of an opportunity. White Smoke Games has announced that Super Chicken Catchers has finally made its way out of Steam Early Access. What’s more, it’s currently free to play between now and February 23, so you can see what all the clucking is about.

Not familiar with Cluckball? Well, think of a variation of Rocket League with chickens, and you’ll get the idea. Super Chicken Catchers features competitive 2v2 match-ups, as you attempt to capture chickens while using riders and mounts. Once you catch the chicken, you’ll be on your way to championship victory.

The trailer below gives you a better idea of what’s in store. Expect lots of frantic action that’s worth getting your feathers ruffled over.

Can you channel your inner Colonel Sanders and catch the chicken?

When it comes to designing a silly game of this nature, White Smoke Games CEO Florent Leger said how proud he was of the team’s effort. He noted that the devs set out to “create a different kind of sports game,” one with “cooperation and communication in an off-beat universe.”

He also notes that Super Chicken Catchers will “create a fierce competition with your friends and family.” And since it’s free to play for the next few days, it should have no trouble building up a small community.

You can check out Super Chicken Catchers on Steam now. If the full game is worthy of adding to your coop of games, it’s currently 40 percent off, priced at $10.79 USD for a limited time. After February 25, it reverts to its normal price of $17.99. Be sure to try out the trial first in case you’re unsure of its poultry offerings. Surely Rocket League won’t mind some unique avian competition on its block.