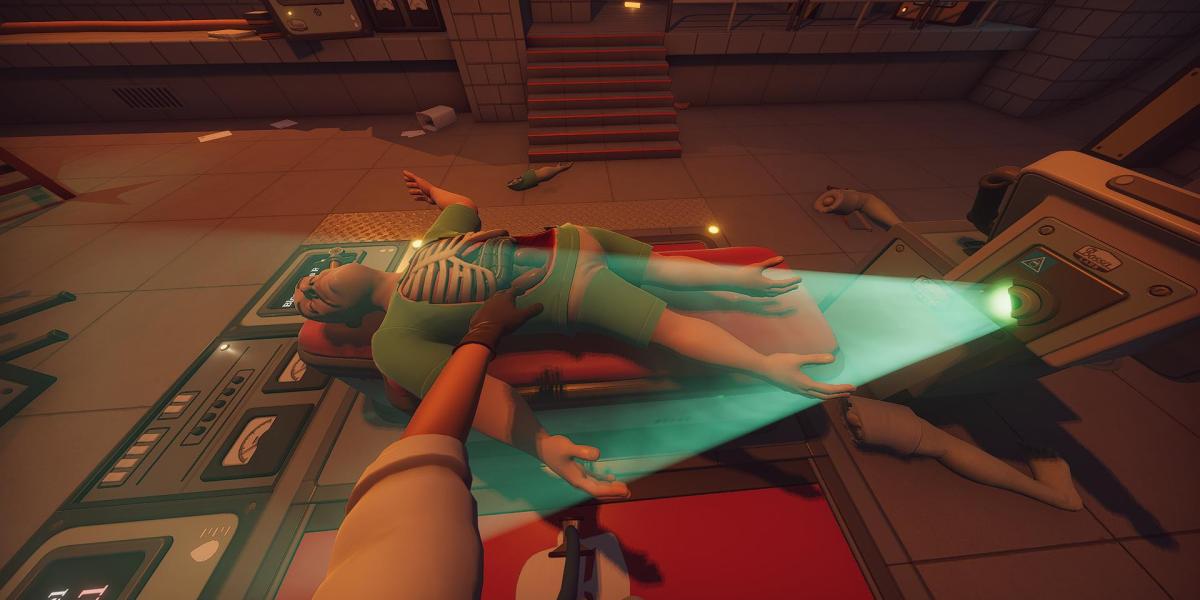 Surgeon Simulator 2 is a hard game for me to score. The first game was practically a meme centered around a gameplay joke. You do a really complicated thing with extremely imprecise controls and wackiness ensues! That very much still applies here but in a much more game-like setting. Personally, I strongly disliked playing this game. But the controls are intended to be bad and accomplishing tasks is meant to be frustrating. People like me shouldn’t play it, but anyone who enjoys this brand of humorous masochism and has friends with which to partake will probably have a great time.

One thing I absolutely can’t stress enough is that although you can certainly play Surgeon Simulator 2’s campaign by yourself, you absolutely shouldn’t. Soloing the story missions made me want to take a long walk off a short pier, if you take my meaning. The game is designed to be played by multiple people, but that can be easier said than done. It’s also a game that’s happy to throw you in a session with strangers that will likely be borderline impossible to cooperate with. The first rando I met immediately ripped the patient’s arm off for no reason at all.

The bottom line is that I think Surgeon Simulator 2 will be very divisive. Many will either love the janky chaos that results when several goofballs play around with silly physics, while people who typically value gameplay and pacing that respects their time will possibly find themselves horribly frustrated by, well, everything happening around them. 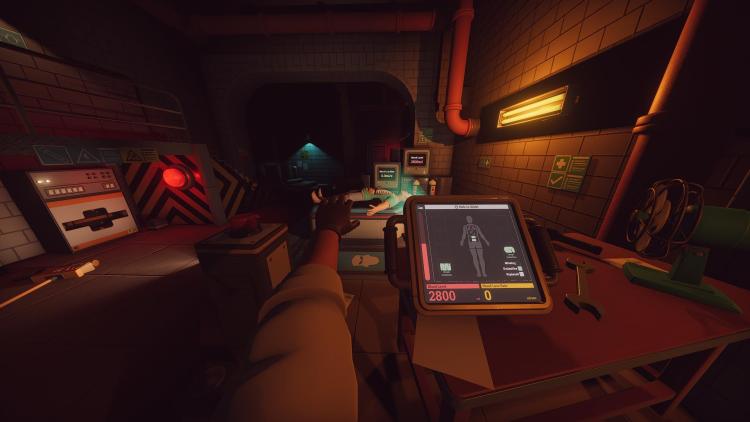 Method to the madness

In case you were wondering, yes, Surgeon Simulator 2 has a story. You’re the newest student of the Surgeon Simulator Program. You’re guided through the initial levels by Pam, a woman who wants to allow anyone with the aptitude to become a surgeon. Before long, you’re introduced to her underlings Neema and Josh as well. Naturally, there are some twists and turns in the narrative that take it in a direction you might not be expecting.

It’s honestly well-written and filled with a lot of really good voice acting. The tone is similar to that of Portal, with a lot of comedic touches dancing around some darkness. When you take a look at Surgeon Simulator 2‘s list of levels, you’ll see that there’s only 11 of them, which seems quite short. Make no mistake, though, the story lasts as long as it needs to. It’ll take a good deal longer if you’re going through it on your lonesome, too. And, even then, many levels can take around 30 minutes to complete.

But the multiplayer nature of the game in addition to its intentionally unreliable mechanics and level length will be a giant turn-off to anyone who just wants to play a puzzle game. And, to be clear, Surgeon Simulator 2 is more of a straight-up puzzle game this time. You could actually rearrange everything into a campaign instead of using the lobby interface, and it would work perfectly fine. But all of this presents some serious caveats that any potential customers should be aware of before purchasing. 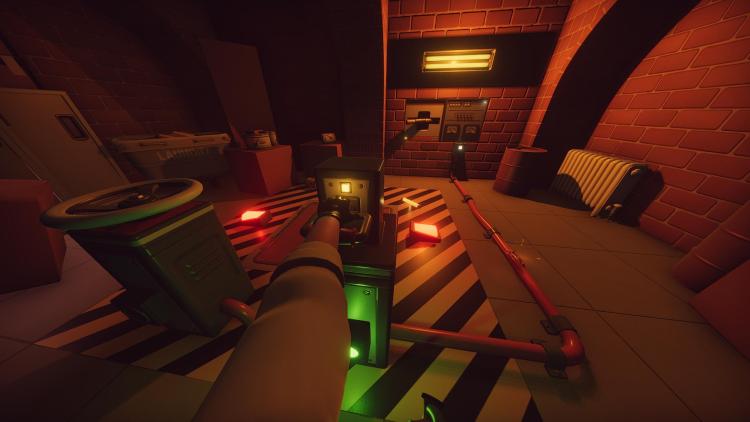 I think I’ve made a huge mistake

Since Surgeon Simulator 2 is multiplayer, you can’t save mid-level. Therefore, you can be half an hour into a level and make a tiny mistake at the very end, causing you to have to start the whole thing over again. And the nature of the gameplay makes this so much worse. If you didn’t play the original, your goal is to carefully control your character’s unwieldy arm as it performs a lot of delicate tasks. You’re going to be sawing limbs, cracking open ribcages, and removing lungs in order to get to the heart underneath.

You can remove organs and extremities with your bare hands, but doing so causes your patient to bleed much faster than if you pull organs out with a scalpel or cut limbs off with a saw. If your patient loses too much blood, they die and you fail the level. In order to get around this, the patient will need to be injected with a yellow blood-stopper liquid via a syringe to stop the bleeding. But you’ll need to typically do this after every last thing. Sawed a leg off? Use blood-stopper. Removed the large intestine? Blood-stopper. Accidentally knocked the patient’s head off with the syringe while attempting to inject them with blood-stopper? Blood-stopper.

This is one of the main reasons that Surgeon Simulator 2 really needs at least two players—one person to do all the slicing and dicing and another to administer the blood-stopper. Otherwise, actually accomplishing anything becomes a frenzied rush that can get old insanely fast, especially since anything can go wrong. I was 25 minutes into a level and only had to reattach a leg in order to win. I was moments away from victory when the force of me trying desperately to get the new leg to pop back in resulted in the patient’s other leg popping off, leading him to bleed to death. I had to start over again from the beginning. 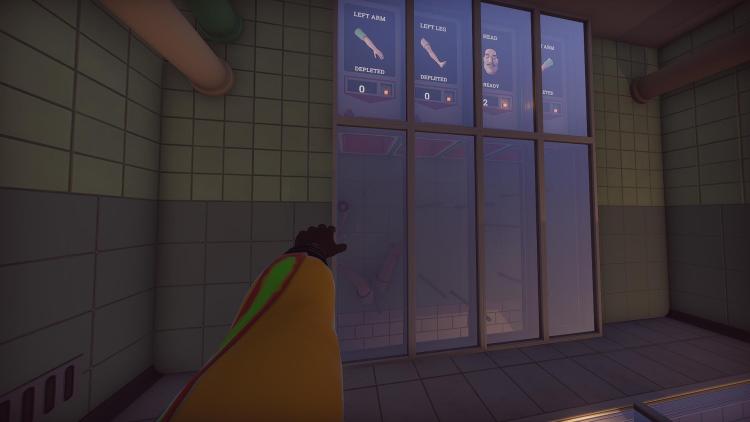 Similarly, actually getting a syringe into the patient can be a crapshoot. It’s very difficult to align your hands properly in Surgeon Simulator 2, and things are going to go hilariously sideways. Although I personally found much of this torturous, it’s also basically the entire point of the franchise. Different strokes for different folks and all that jazz. Story levels naturally amp up as you proceed, requiring you to operate on multiple patients. It can be monumentally stressful.

That’s not to say that Surgeon Simulator 2’s levels are all about performing surgeries. You often need to do a fair amount of prep work and can’t begin your work in earnest until you know where the required body parts are dispensed, where to get syringes, and where the diagnostic machine is so that you can learn what you even need to do. You’ll also need to find keycards to open doors and fuses to power machines. Sometimes you’ll need both to open a door. Hunting for these objects and learning layouts is an instrumental part of the game. The level design is very strong and creative as well, with some levels requiring some platforming or creative crouching. There’s quite a bit to keep in mind.

Aside from the campaign, Surgeon Simulator 2 comes with a very in-depth, impressive level creator that lets you design areas and place items with ease. The possibilities for what people can make are wild, to say the least. Just a few days in, people are already making all sorts of crazy stuff. There’s also some customization. You choose a base character and can change their outfits, hats, and gloves. Earning higher rankings in the story levels will net you new items. There are even a few daily missions that grant you extra experience which levels you up and grants you even more stuff. 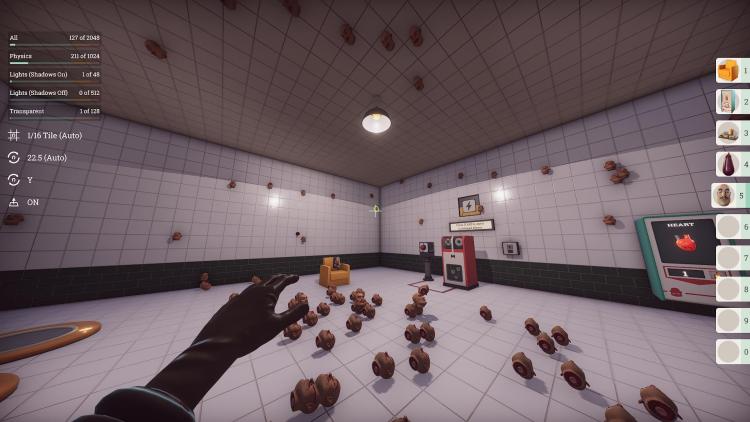 One from the vaults

Surgeon Simulator 2 is absolutely not my cup of tea, but I still appreciate much of what it accomplishes. It can either be zany fun or unbearable calamity to play with other people, and the story levels, while intentionally frustrating and astoundingly long, are interesting and well put-together. As a game, it’s unfair, aggravating, and obnoxious. But as a way to mess around with other people with nigh-unmanageable controls, it’s something all its own. I’m going to try hard to not think about it, but you might very well have a new favorite if much of this piques your interest.

Surgeon Simulator 2 achieves what it sets out to. But it's really for a very specific type of player and many will not appreciate it. As a game, it's often frustrating and tedious, but since that's intentional I can't really fault the developers for expanding on the original in such a manner.

Surgeon Simulator 2 – Quick tips to get you started