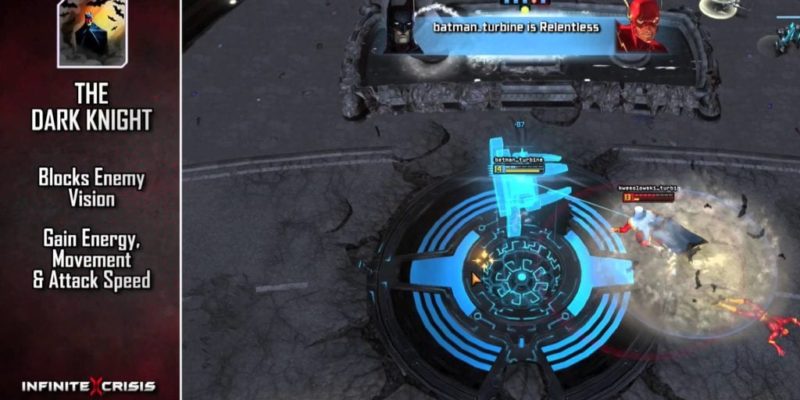 I bet you’re stunned. Even though Turbine’s forthcoming MOBA, Infinite Crisis, already has Gaslight Batman and Nightmare Batman in it, who could have guessed that Batman Prime – or “Batman” to the more casual fans – would have made an appearance? Other than literally everybody, I mean.

Our man Bats excels in getting up close and personal with a single enemy thanks to a dashing attack, and doesn’t have too much trouble keeping them there while he punches their teeth out. His Batarang applies a temporary mark to his targeted enemy, giving his basic attacks a chance to stun and to restore his energy. If he gets into a teamfight, then there’s his Cape Sweep – a point-blank AOE that damages, slows, and lowers the attack speed of nearby enemies – and his ultimate, The Dark Knight, which creates a vision-obscuring smoke cloud that restores and increases Bats’ energy, movement speed, and attack speed while he’s in it. Oh, and it also activates his passive, which isn’t too shabby in itself.

Check out the video below to catch a glimpse of the Caped Crusader for yourself.