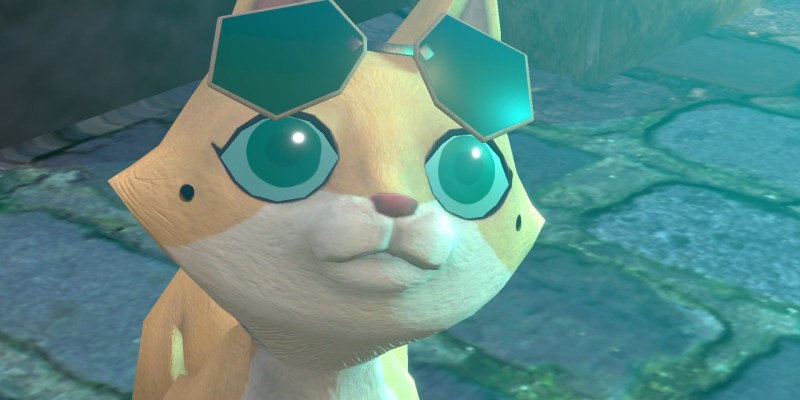 I’ve been a long-time fan of the games of Hidetaka Suehiro — better known as SWERY — who’s currently finishing up The Good Life. While it’s fair to say that not every game of his has hit the mark, I think it’s also fair to say that there’s something interesting in every single project the man has touched. From the stealth-action of Spy Fiction to the Twin Peaks weirdness of Deadly Premonition, and even through the surprisingly heartfelt The Missing, there’s always an element that stands out. So, I feel somewhat privileged that I’ve had a chance to chat with SWERY about The Good Life, his upcoming murder mystery/animal shapeshifting/life simulator/debt repayment game set in rural England.

If that description baffles you… well, it’s a SWERY game. Protagonist Naomi, a journalist from New York, moves to “the happiest town in the world” to repay a massive debt. Naturally, if you read the above description, you can probably guess that things aren’t quite as they seem.

The Good Life went on Kickstarter asking for around $610,000 USD, and raised roughly $725,000 USD over the course of the campaign. And yes, I backed it. It’s a SWERY game. If it got made, I was going to end up playing it regardless. And not only did it get made, but it’s out on October 15.

Do bear in mind that this interview was conducted through a translator, so there may be some nuances not fully conveyed or some slight inaccuracies. Apologies for any possible confusion that results. 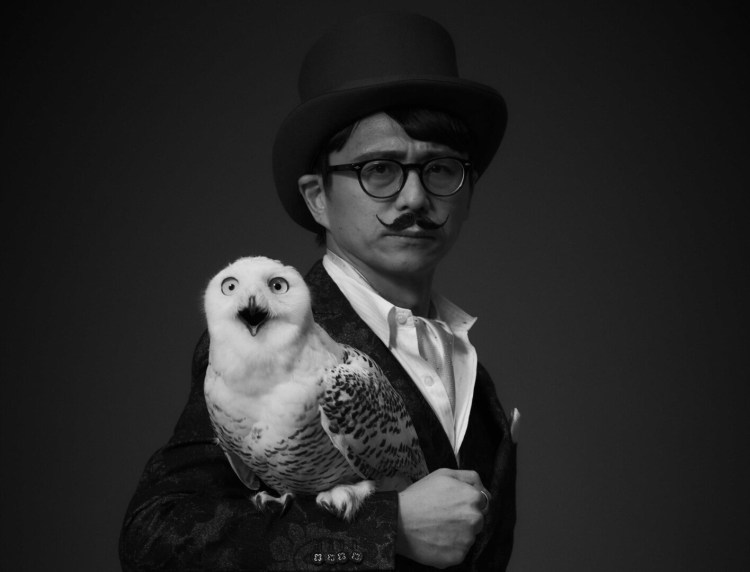 Getting ready for The Good Life with SWERY

SWERY: Thank you for playing my games for so many years. This is yet another SWERY game that can proudly stand shoulder to shoulder with my previous works. I sincerely hope you enjoy solving all the mysteries as you live your new life in Rainy Woods.

PC Invasion: So, for the record! Your name, your job title, and what that means in terms of what you do on The Good Life.

SWERY: For The Good Life, I came up with the original idea, and also served as the producer, director, scenario writer, game designer, music producer, QA tester, and even did a little bit of voice acting work. In other words, I was involved in many aspects of The Good Life, and did my best to shape it into the most current SWERY-esque work it could possibly be.

PCI: While everyone hates the question, “where did you get the idea for this from?”, what were the origins of The Good Life? Did you start off wanting to make a murder mystery, or something involving people turning into animals, or a game set in rural England? How did these elements come together?

SWERY: This is a bit of a long story…

I first started this project a long time ago. Probably around 2004 or 2005, when I was still working on Deadly Premonition. At the time, the producer in charge suddenly got transferred to England for a short time. (He’s Japanese.) 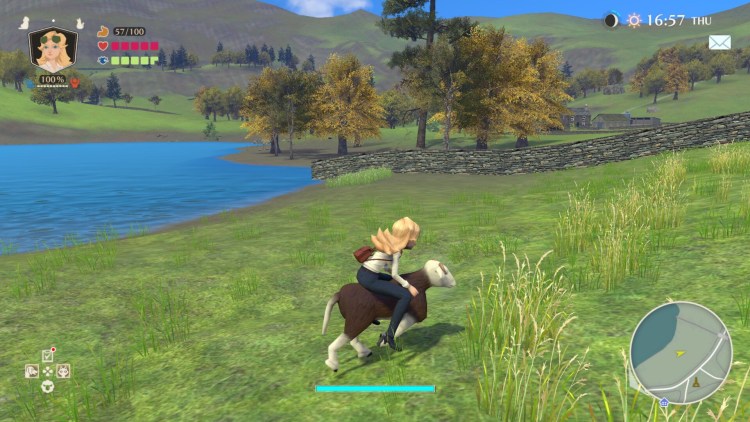 At first he had a lot of complaints about the culture, like “the food isn’t good” or “it’s always cloudy,” or “the beer isn’t cold enough.” But some time passed, and the next thing I knew, he had become wholly charmed by English culture, and ended up falling in love with the place. In the end, he spent four years living in England and, when it came time for him to return, he said he didn’t want to go. Due to those events, I also became more and more interested in English culture over those four years.

Afterwards, I visited England for the first time in January 2013, and the influence from the people I met there and the rural towns I visited strengthened my desire to create something set there. I started to create a pitch back when I worked at Access Games, but I was busy working on other things, so it never really took form. After I went independent, I was finally able to make it into something that I could show people in September 2017.

At that point, everything that I’d been building up suddenly exploded. England, murder mysteries, dogs and cats… I can remember how all the elements finally came together. Unlike other project ideas that I came up with over a short amount of time, this one is composed of very complicated, interconnected parts, which are hard to describe in a single sentence. PCI: The Good Life has already gone through some changes from the initial Kickstarter pitch, and every project changes and grows as people work on it. What are some of the bigger changes, and how have they impacted the game’s scope?

SWERY: I could try and create a list, but I don’t think it’d ever end… There weren’t any changes to the main outline or the backbone of the game. But there are a lot of things that were added as big improvements, such as the graphics, music, and the English localization and voices.

We didn’t plan to release the game for Xbox One and Nintendo Switch at the start. I also planned to create some online features, but in the end we weren’t able to add them in. I wanted to design the game mechanics in a way so that the game could connect with real-life social media, but as time went on and social media became more and more complicated, I had to give up on that idea. 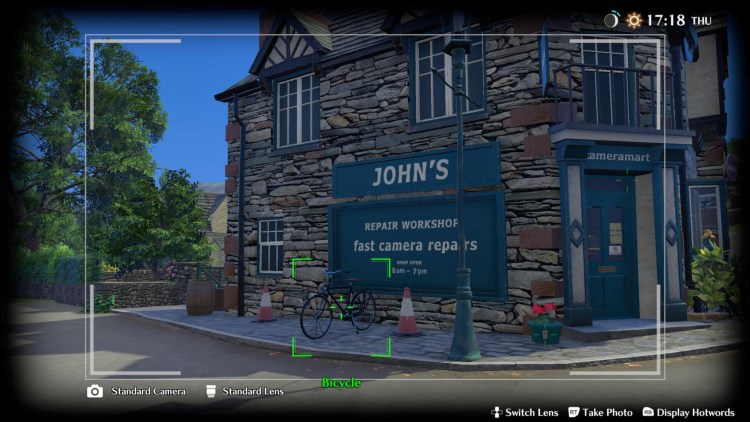 PCI: So, let’s talk a little bit about how the game plays out. How does the mystery unfold? Is it a relatively linear investigation like Deadly Premonition, or do you have the choice of multiple leads to follow up at any given time?

SWERY: I’m sure you’ll instantly get the answer to this question once you play the game, but there are multiple routes to the story, and you can freely choose what order and when you complete them. No matter how you choose to proceed through the story, you’ll eventually arrive at the climax and a proper ending. It’s a really fun story, so I hope you’ll follow it through to the end.

PCI: With all the varied options available, then, can you give an example of how a day in the game might play out?

SWERY: There are 24 in-game hours, and every inhabitant of town moves according to their own schedule. The player has life, hunger, sleepiness, health, and grooming parameters which you’ll need to keep in mind as you go about your day. 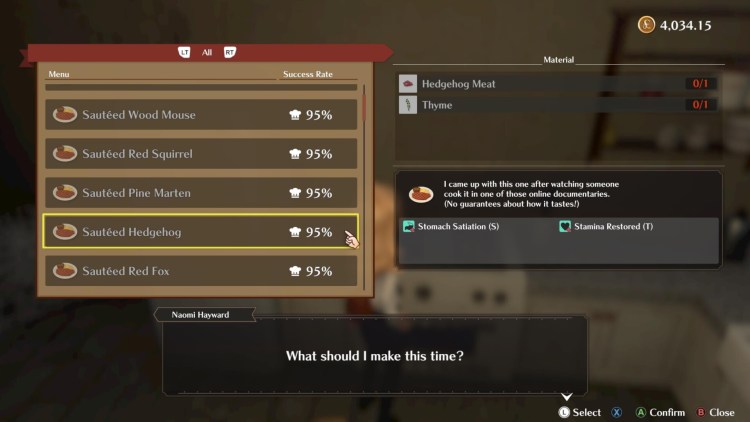 SWERY: You can cook food at your house or go out to eat at the pub or café. You can gather materials in the mountains, make clothes, concoct potions, and even customize your own house. In order to make money, you can take photos and upload them to a social media app called Flamingo. If you manage to earn yourself a lot of Emokes, you’ll get paid by sponsors. You can also fulfill requests from the townspeople.

In other words, you’re free to enjoy life as you see fit. That’s the bottom line.

PCI: Then how’s the game balanced between the mystery, the life simulation, and the other aspects? Is it weighted more in one direction, or can the player — for instance — largely ignore the mystery (or the life simulation bits) if they want to? Or do the aspects like stats and money heavily impact everything, and the mystery locks off other elements until you make progress?

PCI: Thanks, that clears things up. 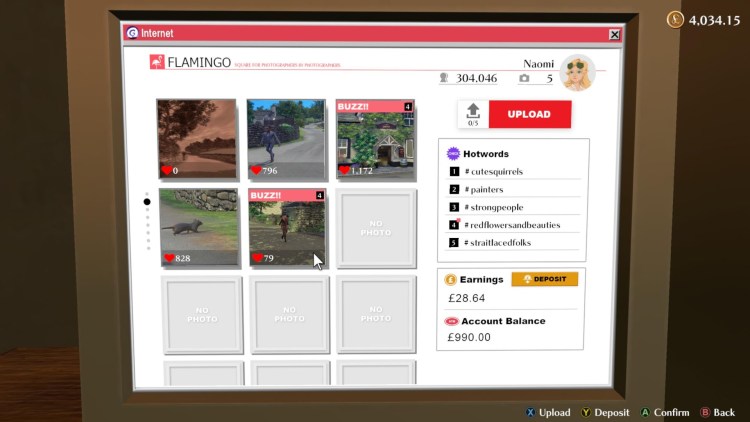 PCI: So is there still plenty to do after solving the mystery, or does the game “end” at that point?

SWERY: Please continue living in town as much as you like. I’m pretty sure the people in town will still have more requests for Naomi.

PCI: On the topic of endings — does The Good Life have failstates? Is it possible to die, or lose the game and have to reload to earlier saves?

SWERY: Yes. Life and failure go hand-in-hand. Good thing this is just a game, huh? Here, even if you run out of “life,” your life won’t actually end. You’ll come out of a black screen and Naomi will be all back to normal. (Of course, you will incur a penalty…) 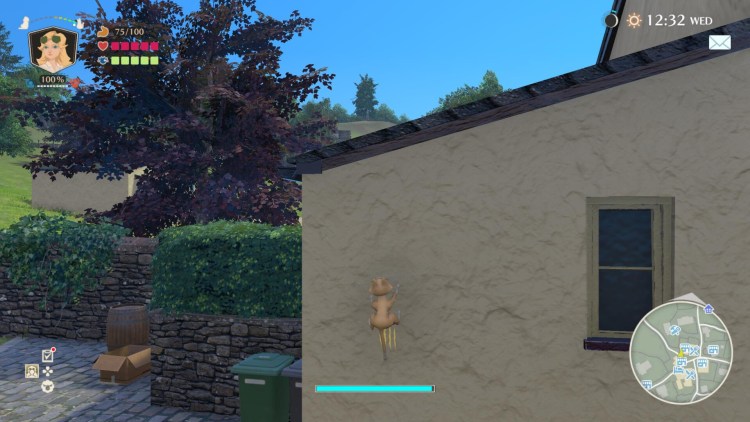 PCI: This is kind of a weird question, and one you might not be able to answer, but I’m curious as to your thoughts.

Japan has a number of game developers who have a very unique style and could be considered auteurs — yourself, Suda 51, Yoko Taro, Hideo Kojima, and plenty others. Even when the games are very different (like Spy Fiction compared to The Missing), there’s still a very noticeable “fingerprint.” While there are some developers like this in the West, it seems to be a lot more common in Japan, and those developers are fairly well known over here. Why do you think this is? Do you think there’s a fundamental cultural difference in the way games are conceived and developed?

SWERY: I myself don’t know anything about other creators, but one difference I see when I look at game development in Japan and the West is that Western game studios have succeeded in industrializing game development, while Japanese studios are unable to do that, and still approach game design from an “artisan” perspective. There is this top group of people as well as a group of builders who work to support the artisans’ creativity and help to make the creative output possible, which ensures that everything will end up as high quality.

Thus, comparing the differences in all these high-quality things is extremely difficult (and requires the person making the comparison to have a high ability in terms of making comparisons). In the end I think it’s just very hard to pick out the differences in the extremely unique “artisan nature” of the elements. It may sound paradoxical, but in other words, Japan is still unable to cultivate a group of builders that can produce quality capable of competing on a worldwide scale. In the end, they simply put emphasis on the director’s unique touches in order to create games that will appeal to the whole world. I personally think that’s the crux of it. PCI: Finally, something you definitely won’t answer. You have a habit of including a character called Forrest Kaysen (or at least FK) in your games. Will we find one in Rainy Woods…?

PCI: Thank you for very much for taking the time to answer these questions!

PC Invasion would like to thank SWERY for making time to speak with us about his next game. You can live The Good Life for yourself on October 15th, and with a bit of luck we’ll have a review up.

Note: This interview has been edited for clarity.

How to get Doritos, Mountain Dew rewards for Call of Duty: Vanguard and Warzone