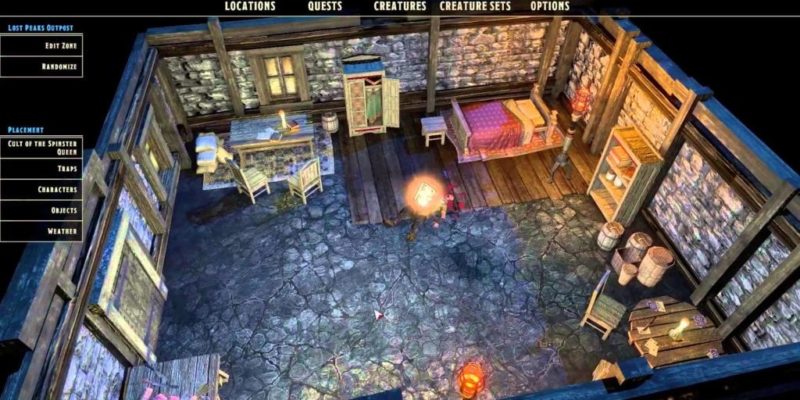 A pair of Sword Coast Legends videos have been released, showing some campaign creation and then a run through that campaign.

Warning one: this is apparently an extended look at what was shown at E3, so you might’ve already seen some of this before.

Warning two: I’m 40 seconds through the first video and I’ve just been told that the campaign will revolve around “the biggest, nastiest spider” they can manage. Fucking brilliant. Thanks for that, guys.

So! The first video is a 12-minute look at designing your own little mini-adventure; in this case, a quest leading to an eventual encounter with a spider-worshipping cult. It all looks remarkably simple, with characters, monsters, and scenery being dragged and dropped into the environment, and a variety of menus to set up quests or tweak the individual characteristics of everything the players will encounter. I’m assuming there’s also going to be a fair amount of in-depth customisation stuff – triggers, and the like – that wasn’t necessarily shown here, but it looks rather fancy anyway.

The second video is a 14-minute playthrough from the DM’s perspective, which has some twists of its own. The DM can adjust things on the fly; perhaps he or she doesn’t like one of the pre-scripted encounters and wants to replace it with something else. Well, they’re entirely free to do this, as long as the party has yet to enter that room and trigger that encounter. Doors can be locked or hidden, traps can be added, monsters can be replaced. All of this costs “Threat”, which is the DM’s currency for screwing with players. The DM earns a little over time, but most of it comes from the players succeeding. The better the players are doing, the more Threat the DM can employ against them in the remainder of the dungeon. On the other hand, if characters start dying, the DM loses a chunk of their Threat.

I like this idea (particularly if it’s well-balanced), although I’d also hope it can be entirely disabled for dyed-in-the-wool DMs who might want to port across some of their pen-and-paper adventures, and who know what they’re doing. When playing with a more random group, though? Maybe a good idea.

The DM can also control his monsters directly and adjust the difficulty of the set encounters. Indeed, you might want to make a corridor of traps a bit trickier and add a locked door in the way, just so you’ve got a bit more time to set things up further ahead (like adding a tent and a corpse concealing an explosive trap, as in this video). Alternatively, you might want to stick with the party and micromanage every encounter they hit. Or maybe they’re having a hard time in a fight? Demote a monster or remove a little bit of its health to even things up, maybe.

Basically, it looks like DMing will pretty much be a game in and of itself – which is sort of the point – but one that’s still based on making sure everyone has a fun time, and not just the people on one side of the metaphorical table.

You can see both of those videos below, along with a bunch of rather lovely screenshots. Sword Coast Legends is due out in September, and I’m rather looking forward to having a play with it.

A Beginner’s Guide to Heroes of the Storm