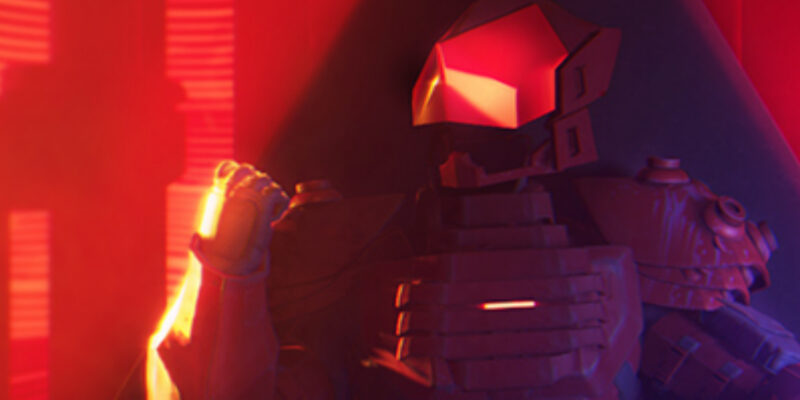 Truth be told, I don’t usually care much for top-down shooters. It isn’t that they can’t be fun but the genre is filled with many uninspired games that all play alike. It’s for this reason that Flow Fire Games’ Synthetik 2 was so interesting to me. Unlike most of its competitors, it tries to be something more than just another generic game. Synthetik 2 is an Early Access top-down shooter that is expected to launch in 2022. Well, it’s actually an isometric shooter if you want to get technical. Regardless it’s set in the future and is the sequel to Synthetik: Legion Rising, a highly acclaimed game from 2018.

Although the plot in Synthetik 2 isn’t important, the general idea is that you play as a soldier who is tasked with finding the Heart of Armageddon. To do so, you’ll have to conquer many stages, overcoming hundreds of the Machine Legion in the process. Each machine legion uses different weapons so you’ll have to figure out the best way of defeating each of them.

Synthetik 2 is a roguelite that uses procedural generation to partially determine the layout of levels. That means that each level is random, and no two attempted runs will ever play out the exact same. It’s a classic model adopted by a large range of games that improves a game’s replayability. Just look at how many hours people can put into great games like The Binding of Isaac and Spelunky as proof of that.

The risk of any game that relies on procedural generation is that the levels created aren’t always that interesting. It’s a challenging task for a developer to mold a system where the game can keep creating its own levels without them getting repetitive. Even worse, it’s possible to end up with a level design that lacks creativity. 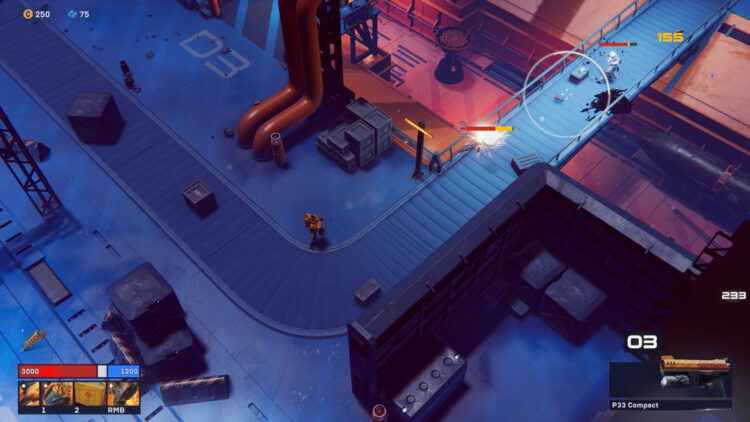 A good example of this is the older Elder Scrolls games. Bethesda used procedural generation for The Elder Scrolls 2: Daggerfall. The result was a map thousands of times larger than anything found in Morrowind, Oblivion, or Skyrim. Yet I would argue that it has one of the worst maps I’ve ever seen in an open-world game. Why? Because it’s full of nothing.

Thankfully Synthetik 2 doesn’t fall for this same trap. The general layouts of each level don’t change much and instead, it’s the props and weapon drops that switch around. This ensures that the levels are purposeful and well designed without making them too repetitive. Furthermore, mod support is present so you can be certain that the community will be introducing a lot of diverse content to try out in the future.

The biggest aspect of Synthetik 2 that helps it stand out is its surprisingly steep skill ceiling. With it being a rogue-lite I was expecting it to be a little difficult, but it turns out that the gameplay mechanics are far more complex than I anticipated. There is a lot going on making it a genuinely difficult game to master.

As you progress through the stages, you can collect several weapons by looting crates. And you can hold up to three different weapons at once including your starter weapon, which cannot be dropped. Each weapon is suited for specific needs and can be upgraded at the various vendors found around the levels. These vendors also sell abilities and items that can be used to make winning gunfights easier. 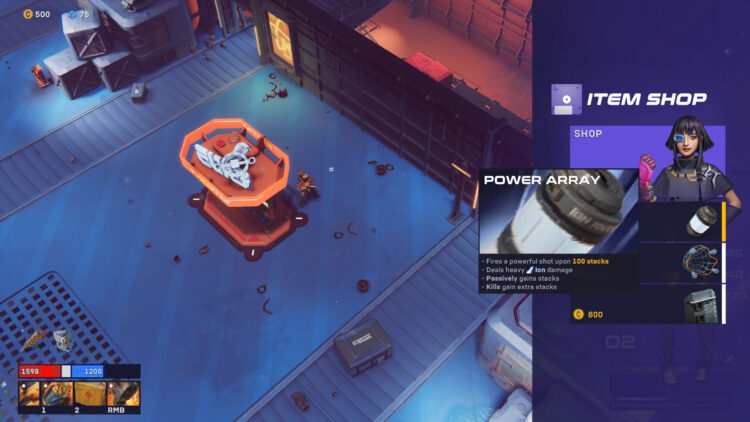 Unlike most top-down shooters, handling these weapons is not a simple task. Each gun suffers from recoil spread, shot recovery, and magazine jamming. The only way to circumvent the spread is by tap firing. Spraying like a madman Call of Duty style isn’t going to cut it here.

Furthermore, shooting whilst on the move will also increase the spread of gunfire. It is therefore often better to come to a stop and pick off targets with precision. Some guns like the pistols and SMGs are more forgiving, with heavier guns like the rifles and snipers demanding a slower-paced approach to be effective. 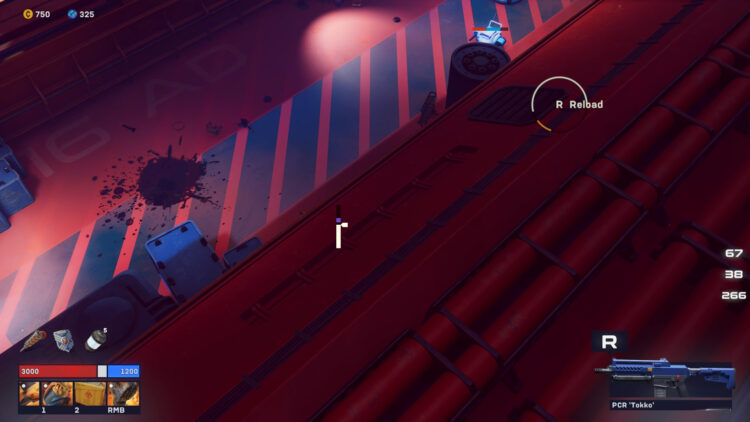 There’s something very cool about having to dip into cover to manually reload. It’s a mechanic I am extremely fond of and would love to see in more games.

The mechanic behind reloading is very well done. For one, once a magazine is emptied you have to manually eject it and then separately begin the reload. Once the reload animation has started the player must hit the reload button again at the right time to load the next magazine faster. Missing this window will greatly extend the time spent reloading, leaving you vulnerable to enemy attacks.

Even aiming is skill-based, as you can benefit from critical hits by shooting an enemy’s weak spot. This isn’t done by vaguely aiming at an enemy and hoping for the best. Instead, you have to mouse over the weak spot and shoot whilst also taking into account the projectile travel time. All of this adds up to create a game with a far higher skill ceiling than one may first assume.

For all of its charm, the original Synthetik wasn’t the best-looking game on the market. The sprites and animations told you everything you needed to know about the game’s limited budget. It was still presentable for sure but its visuals were never a serious selling point.

In contrast, Synthetik 2 is a far nicer-looking game. It received a visual overhaul, bringing it more in line with other top-end indie games. The shift in aesthetics may not be to everybody’s taste, but I suspect the mass majority of players will prefer this. 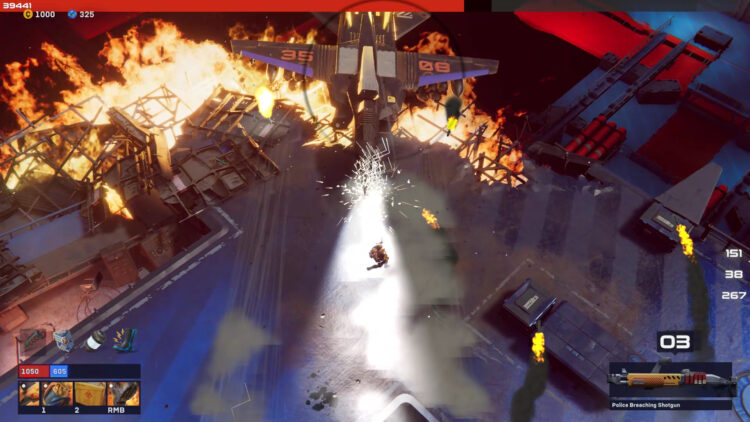 Even if the general look of the game doesn’t do much for you, it’s hard to argue that the animations and visual effects haven’t seen improvements. These improved effects help make guns feel more impactful, especially for explosive weapons like the Grenade Launcher.

Improvements to the game’s overall sound design help too. Guns sound beefier than ever with the difference between light and heavy weapons being more emphasized than in the past. The original game suffered from having a lot of overlap in terms of how weapons sounded, so this is nice to see. These technical innovations are a great showcase of how far the team at Flow Fire Games has come since starting their journey.

In many ways, Synthetik 2 plays similarly to its predecessor. Most of the stronger aspects of Synthetik: Legion Rising remain, whilst other weaker elements were improved upon. At least for this Early Access version, I don’t think Flow Fire Games have been overly ambitious, but that isn’t necessarily a bad thing.

Thanks to the developer having a clear idea of what it wanted Synthetik 2 to be, it has ended up as a perfectly reasonable sequel. Fans of the original will enjoy this just as much, although I’m not sure it will appeal to gamers who weren’t already on board. Moving forward it will be interesting to see how far mod support and additional content updates leading up to launch can elevate Synthetik 2.