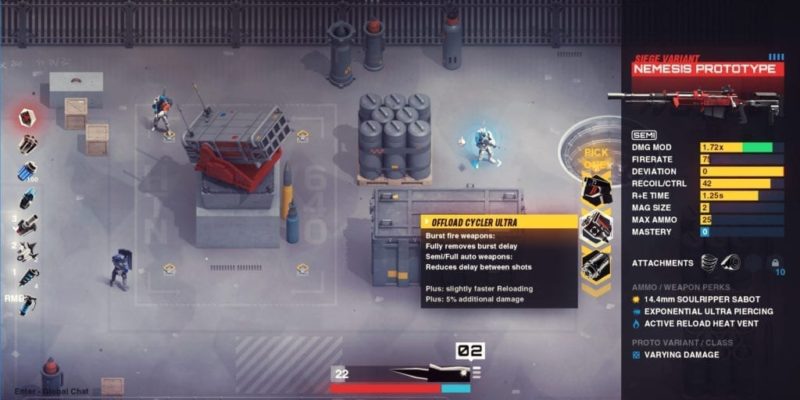 Enter our contest for your chance to win Synthetik!

A contest a day keeps the doctor away. Test your luck for a Steam copy of Synthetik.

The only thing better than making a great game is making a great game even greater. And that’s exactly what Flow Fire Games have done with Synthetik. Already boasting a Very Positive user rating on Steam, today sees the launch of the Legion Rising expansion.

Enter our contest to try out the newly-enhanced game for yourself for free!

Synthetik is a top-down roguelike shooter featuring modular difficulty and randomly-generated levels to keep you on your toes. With advanced weaponry, eight character classes, weapon jamming, multi-stage reloading, and switchable ammo types, the game is already acclaimed by critics and fans. The Legion Rising update takes things to a whole new level:

If you’ve somehow tried out all of the 60+ weapons (and 1,200 variations) in these past six months, mastered every item, enemy and boss battle, and perfected your endgame strategy, we have good news for you. New free content is added to every part of the game, gameplay improvements are made, the interface received an overhaul and five new languages (French, Spanish, Italian, Polish, and Brazilian Portuguese) are supported.

There are now eight class specializations to choose from with fresh playstyles and 48 new passive benefits. Play as the backstabbing Assassin, use your turret and superior technology as Engineer, blow up everything as the Demolisher, fight face to face with the armored Riot Guard, or any of several others.

Strategize with 125 upgradable items (everything from sentry turrets and psionic traps to mind control devices and ancient relics) and 20 new weapons, balance tactical decisions to take a shot at unforgiving new boss encounters, enemies and the enhanced endgame challenge after beating the final boss.

Following the huge expansion, SYNTHETIK will increase in price and gain the Legion Rising subtitle, reflecting everything that has been added both with this add-on, what is yet to come, and the many earlier updates since the game launched. Owners of SYNTHETIK will receive everything in the expansion for free.

Do you have what it takes to defeat the Machine Legion?

Like I said, they’ve gone and made a great thing even greater.

To enter to win, use the widget below to follow PCI on Twitter. And if you’re feeling frisky, let your friends know what we’re up to around here. Just if the cops show up, act cool. We don’t need any heat around here, ya dig?

We will draw 20 random winners on Sunday, October 7.

Synthetik, along with the new Legion Rising update, is available now on Steam.

Win a Steam key for Synthetik from PC Invasion!