In the original System Shock, terminals were spread throughout the game, that if tampered with, would transport the player. These areas were trippy, and presented a digital construct of electronic programs. Since then, games like Watch Dogs have implemented similar techniques to display electronics for in-game puzzles. Of course, Ubisoft’s versions were a huge visual step up, but now developer Nightdive Studios has shown off its reworked Cyberspace levels for the System Shock remake.

The new Cyberspace levels might just overtake the Watch Dogs effort in visual style. These mini digital construct levels look brilliant, and almost play out like a full 3D version of Space Invaders. Essentially, you’re a floating camera shooting enemies in a world made up of a bunch of electronic wire lines, and we’re all for it.

This brief look into the System Shock remake is quite different to the last trailer. Back in June, Nightdive Studios showed off some lovely, calming elevator music in its alpha demo teaser trailer. Prior to this, the studio did release a playable demo showcasing the Medical Bay level, which is still available via GOG and Steam. Currently, there’s no word on a release for a potential beta stage demo, or when final release is coming.

More than two years ago, we reported on some development issues with the System Shock remake. The remake of this cult classic garnered plenty of traction when it was revealed, perhaps a little too much. The Kickstarter project raised over $1.3 million USD. As a result, the development process became a little more complicated. In short, Nightdive Studios got a head of themselves and almost created a new game, rather than a more faithful remake as was the intention. 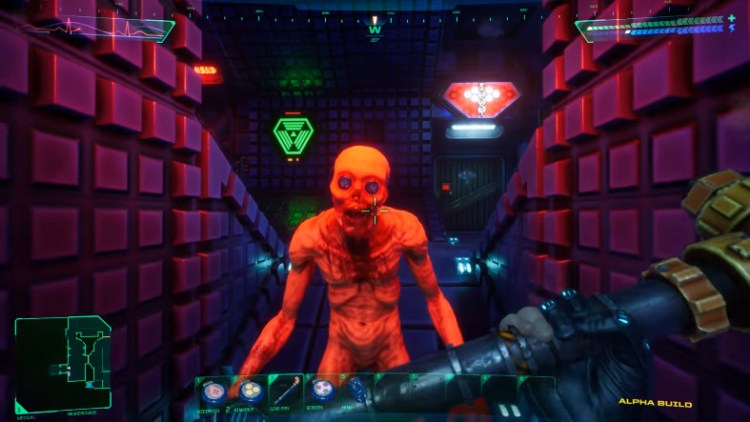 Thankfully, the team seems a little more on track in 2020. This Cyberspace reimagining manages to look modern while retaining what made the original so thrilling. The System Shock Remake will be out on PC soon, hopefully.