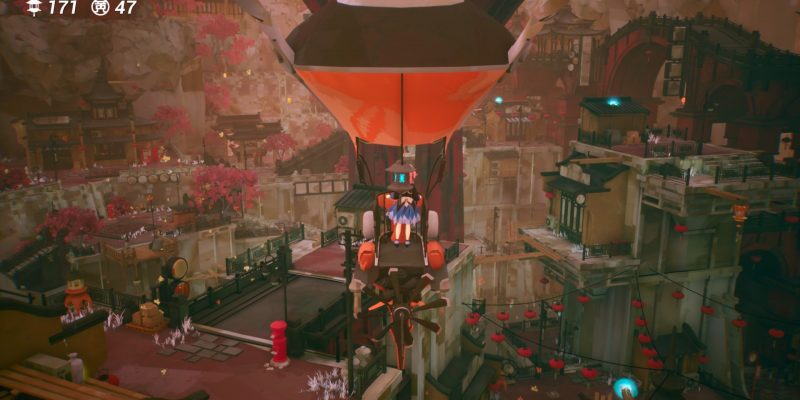 My adoration of 3D collect-a-thon platformers has persisted through the long drought they’ve endured since the turn of the century. Balan Wonderworld was disappointing, but I was surprised to see that another game in the genre would be gracing PC soon. Tasomachi: Behind the Twilight isn’t interested in being particularly challenging or lengthy. But it does offer a joyful, relaxing experience that I couldn’t help but be pulled into.

Tasomachi puts players in control of a young woman named Yukumo. We know nothing about her. She doesn’t speak, so there’s not much room for interpretation. Yukumo travels via an airship, which gets damaged, requiring her to seek out Sources of the Earth, which are needed for repairs. But the town she lands in is covered in fog. It’s up to her to reawaken sacred trees to clear the fog out, followed by a trip to remove the source altogether.

Funnily enough, that description practically covers the entirety of Tasomachi‘s plot. It’s barely there, and it’s never a focus. You’ll find lore scrolls occasionally that have tiny bits of information, and tiny cat-people have a few lines of dialogue here and there. But the focus is almost exclusively on gameplay and exploration. I honestly prefer this over sitting through dozens of minutes of boring conversation where characters hurl vague reasons at you for finding all the shiny golden things hidden all over. I found it refreshing. I’m glad I didn’t have to watch any awkward musical numbers while goofy character models danced around for a few minutes. Tasomachi begins with Yukumo briefly piloting her fully functional airship prior to it becoming damaged. She then docks and uses a temporarily unoccupied building as her base. From there, she’s told she needs to find 90 Sources of the Earth, the game’s golden trinkets, to restore her airship. The game’s general structure is that there are three areas with trinkets scattered around and she needs to find them. Each of the three areas have two shrines that need to be cleansed, with each shrine containing four challenge rooms that award one trinket on the first go-round.

After getting 90 trinkets, Yukumo’s airship gets repaired, allowing you to fly it in the three areas. This is appropriate because Tasomachi periodically adds new trinkets to collect. When you initially hit an area, walls of blue fire block off certain areas. Purifying the first shrine removes these blockades. Purifying the second removes the fog in that area and changes it to a day-night cycle. It’s then populated by NPCs that offer various brief quests, as well as additional trinkets to find. Each area grants Yukumu a new ability as well, which allow her to collect even more trinkets.

Once the airship is repaired, you need to acquire 150 trinkets to get to Tasomachi‘s last area, which is a brief minigame where you fly around and shoot down as many black lanterns as possible by using a fireworks gun. Hitting all 60 is actually fairly tough, and I’ve only been able to get 52. Granted, you’ll beat the game regardless of how many you hit. Doing so, however, unlocks even more trinkets to collect. Plus, you’ll need 180 to unlock the final shop, which has two unique costumes that can be acquired by shooting down all 60 black lanterns in the last stage and by collecting all 240 of the game’s trinkets. When you first begin Tasomachi, Yukumo can only move and jump. However, she gets an additional movement ability in each of the game’s three main areas. The first is a stomp move that breaks wooden planks, the second is a boost that propels her forward a bit while in the air, and the third is basically a double jump. By combining the boost and double jump, Yukumo can cover much more ground.

The controls are rather good. I found it easy to carefully control precise movements while maneuvering around Tasomachi‘s environments. The boost and double jump also add a lot of additional air control, making it much easier to make tiny adjustments. There’s nothing unusual about the way the game controls, though, as it’s intentionally easy to understand. The airship also controls fine, as it can be raised and lowered. Everything is nice and responsive. I always felt like I was able to accomplish all of the game’s tasks without any issue.

However, Tasomachi is almost always a highly lenient game without much focus on challenge at all. The shrine trials have a couple of tough rooms here and there, as you’ll have to carefully time some jumps. These vary from transferring Yukumo between moving platforms, jumping across gaps using jump pads, navigating invisible platforms, or even attempting to maintain balance while jumping between rotating wheels. Occasionally, there’ll be a simple puzzle to solve. But practically everything save for 100%-ing the black lantern section won’t present much of a challenge to most players. Most of your attention in Tasomachi will be on carefully combing the environment for all of the trinkets. Collecting all 240 will take a bit of doing, especially since some of the game’s tasks require a fair amount of looking around. Characters in each area will ask you to light every torch. You also search for destructible rock formations to get some trinkets, and these can take a keen eye.

Tasomachi‘s main focus is on relaxation and careful exploration. The game’s visuals are fairly basic, but lovely, as it makes great use of color and some of the vistas look great, especially once you’ve eliminated the fog. The game is at its best when you’re just looking around for more trinkets to find while enjoying the ambiance. It’s a peaceful, fun game that doesn’t have much tedium or any unnecessary inclusions, which I appreciated.

While you can certainly beat Tasomachi in four to five hours, this isn’t a game most will simply play to beat. There are no stakes and there’s barely a plot. It’s really for anyone who just wants to have a pleasant time while exploring a lovely, quiet place. Collecting all of the trinkets will probably take at least eight hours. There’s enough to do here to make this recommendable whether you want something quick or something that’ll take a bit more to 100%. Tasomachi may not be long or challenging, but I’m glad I got to play it. I found it to be an enjoyable, albeit unambitious, way of passing the time. It definitely satisfies that collect-a-thon itch while doing away with the rest of the genre’s baggage. The game is a nice surprise for anyone looking for some serene, calm exploration.

Unambitious, easy, and rather brief, Tasomachi still does an admirable job of succeeding at what it sets out to do. With lovely visuals, tight controls, and plenty of relaxing exploration, it's hard to walk away as anything but charmed. 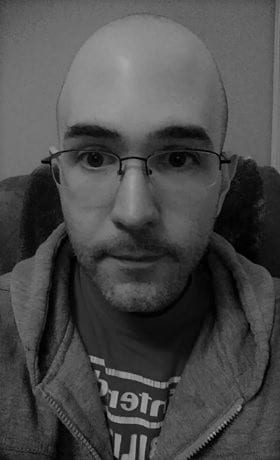