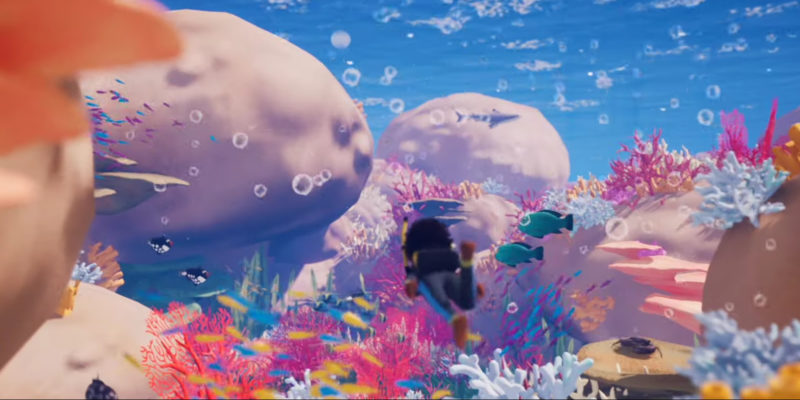 Yesterday saw a lot of games being revealed because of The Game Awards. However, one reveal had nothing to do with yesterday’s show, yet still managed to capture some attention. The game is Tchia, and it pulls from multiple other games while still retaining its own unique qualities, all shown in a short trailer.

Tchia revolves around the island of New Caledonia, a small island far off the eastern coast of Australia. The game’s title is also the name of the young girl with magical powers players control throughout the game. The trailer shows her doing just about everything a junior Lara Croft would do. She sails through rough waters on a makeshift raft, climbs up steep cliffs and parachutes off of massive mountains. That last part is where some of the game’s outside influence starts to show, and it doesn’t stop there.

A mix of ideas new and old

In the trailer, when Tchia jumps off of a cliff, somersaulting down before hoisting a leaf above her head to gently glide. She later pulls out a ukulele and begins strumming chords shown in a small, circular UI. These ideas, respectively, are undeniably inspired by a couple of the biggest games in recent times, The Legend of Zelda: Breath of the Wild and The Last of Us Part II. While it wasn’t shown, it wouldn’t be surprising to find a circular meter for stamina when Tchia is climbing up a cliff.

While some of these ideas may not be the game’s own, it certainly does have at least one that is wholly unique. By the looks of it, Tchia will be able to possess any organic thing in the game. That specific wording has a purpose, players won’t just be able to control sharks or seagulls. At one point in the trailer, Tchia is sucked into a coconut, which begins rolling around and jumping soon after.

Tchia does not have a release window just yet, but it can be found on Steam.