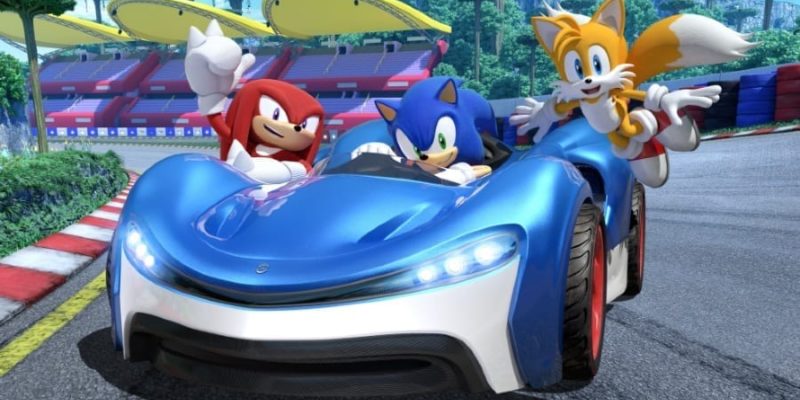 The Sonic racing franchise has grown to be more than a Mario Kart clone. Sega has continued to polish and grow the franchise into a worthwhile venture. Sonic & All-Stars Racing Transformed was my taste of Sonic in a kart racing title, only leaving me wanting more. To be honest, when I heard that Team Sonic Racing was going to see a slight delay, it started to rile up small wisps of worry. I remember hearing some feedback about the game post-E3 2018 from some of my colleagues. Comments like, “The game is too slow,” and, “It seems like it’s geared towards kids,” were all too abundant.

At this point, if those were genuinely concerns of people that I respect within the gaming community, then Sega and Sumo Digital truly did their best to remedy those sentiments in the final product.

The Mario Kart franchise is probably the most notable, if not the most recognizable, kart racing game on the market. It’s a shame at the same time, really, being that the game is only available on Nintendo platforms (not for long, I guess). As a first-party Nintendo title, this doesn’t give others out there the chance to play each iteration unless they own the console to play it on. This is one way in which Sega has managed to capitalize on this shortcoming and create a worthwhile racer that just keeps getting better each iteration.

Even from the beginning, the thing that stood out to me most about Team Sonic Racing was its visuals. The game is a vivid production of just about every single color in the spectrum. Levels are awash with bright tones and perky animations. This is something that carries on through the entirety of the game. 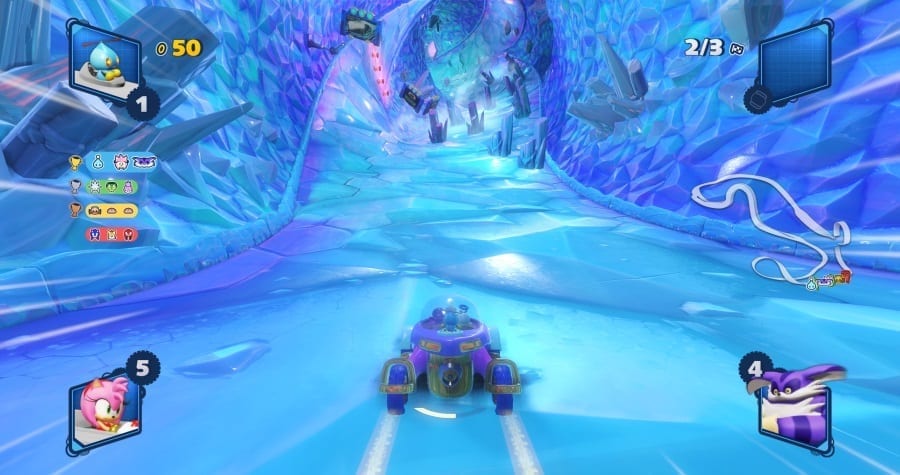 I couldn’t really commend the visuals of Team Sonic Racing without commenting on the sheer cleverness of each level designed. You’ll see things like a giant laser-shooting robot burn lines into the track as you drive by, and of course, what would a Sonic game be without a giant killer whale splashing through the scenes?

The game does become more intricate than just polished visuals in the background. Each level is built with a sense of density. You may be strolling on a raceway in the clouds, but off in the distance, you’ll see things like giant Sonic and Shadow the Hedgehog balloons. This is the same for just about every other level in the game, giving the appearance that there is more going on in each location than just a giant race.

The best things come in threes

In Team Sonic Racing you must work together as a three-person team in order to place first. During a race, your racer will emit a glowing trail behind them, allowing you to skirt along for the ride. This move helps to fill your ultimate and can also be used to slingshot you ahead of the other racers.

Another area where you focus on teamwork is with item pickups. If this all sounds a little overwhelming — it was very much so at first. However, just playing through a few matches and seeing these things work in action does a lot to clear the air on the confusion. 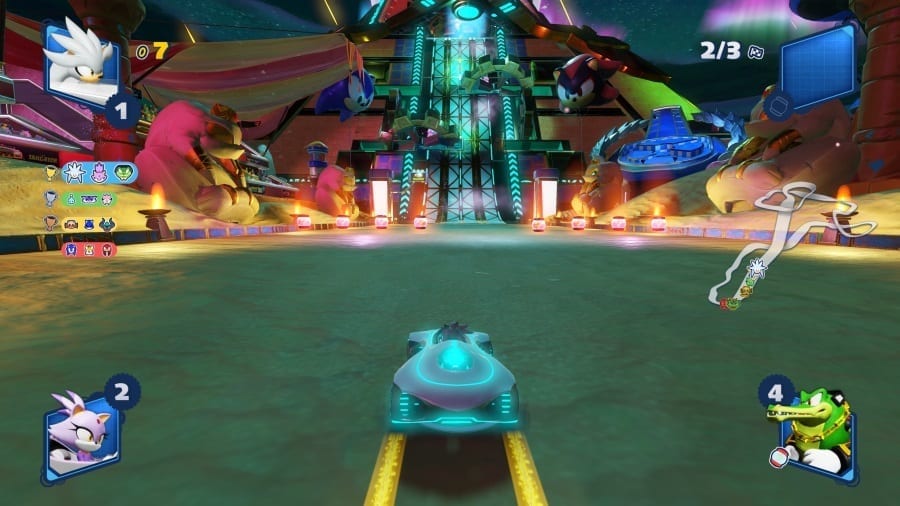 During a race, you can call or send items to your teammates. This isn’t done just to add another feature to the game, though. Many races during the story mode will have objectives for your entire team to place within the podium positions. That means you’ll have to come in first, second, and third. Or, when there is a Grand Prix available, you must all at least place high enough to have a cumulative team score to beat out the rest of the racers. Passing items, slingshotting, and timing ultimate moves are all part of the strategy you must deploy in order to have your team progress on to the next set of levels.

This might sound cumbersome or a lot to manage for a kart racing game. However, I will say that this works out darn near flawlessly in everything that I’ve played. Frustrations do arise when you’ve been pelted with item after item. However, instead of the responsibility being put on your shoulders as the sole racer like in Mario Kart, the team behind or in front of you can now assist with getting you back on track.

Connections to the online portion of Team Sonic Racing have been spotty to say the least. There were times when I would get thrown into a match with little to no wait. Other times, I was waiting around and wondering if the lobby was ever going to get full or when everyone would ready up. However, once I’m able to jump into the action, the team-based gameplay works as well online as it does playing through the campaign solo. 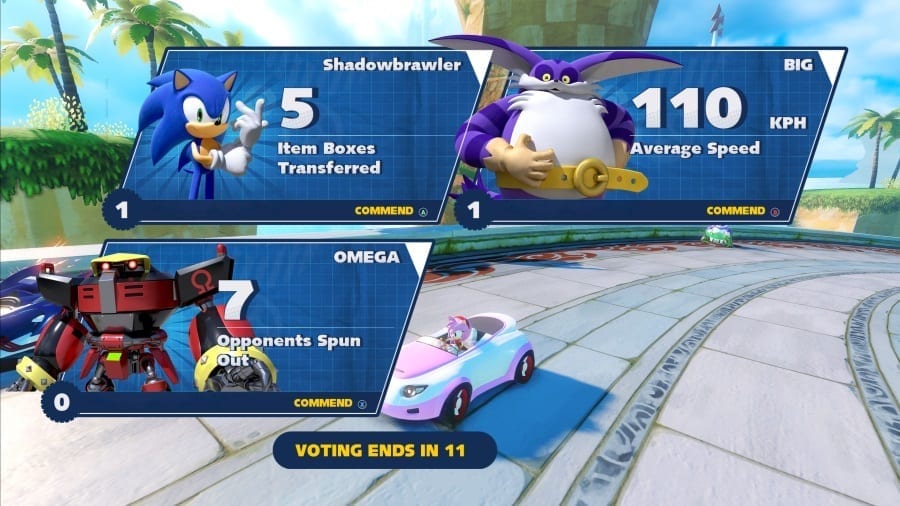 You can play in both team and traditional racing modes for those of you who just want to jump in and race online. Funnily enough, I spent more time perusing the challenge and story levels of the game than playing online. One reason might have been the abundance of unlockables throughout these modes.

As you play through the story mode, you’ll start to accumulate tokens to use towards unlockables. These tokens can be exchanged for Mod Pods, unlocking things like new kart equipment, paint jobs, and horns. These do become important as many of them affect attributes like vehicle defense and boost. Tokens start to get piled on pretty quickly, which felt rewarding even after clearing only a chapter of the game. 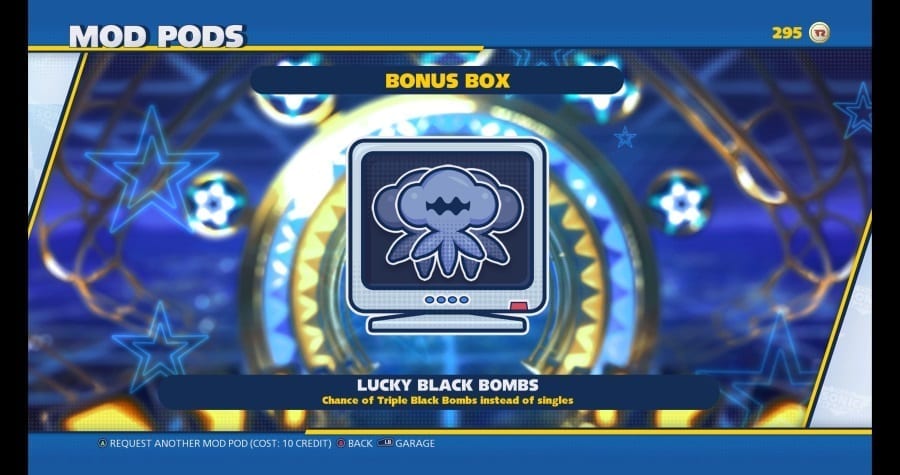 Small perks, such as bonus item blocks that allow you to stack weapons in trios rather than singles, come in handy for uber-challenging races. That is one area that I felt the game could have dialed back on, as some of the challenges are obtusely difficult. (I’m looking at you, drift challenges.)

I was wary about jumping into Team Sonic Racing. I was excited since I had so many fond memories from the last game in the franchise. At the same time, I wondered if the short delay in the game’s release would help or hurt the previous build that was shown to the public.

After putting in around 10 hours, I’m happy to see that whatever problems the game might have initially had are pretty much nonexistent.

Team Sonic Racing is most definitely a racing game for Sonic fans, but also for anyone that is remotely familiar with the genre. The online modes can be dialed back for all you solo drivers out there. However, the team mechanics work surprisingly well, and you shouldn’t miss the opportunity to see this vividly crafted world that Sumo Digital and Sega have created. Team Sonic Racing might not exactly edge the king of kart racers, but it does position itself to be hot on its tail.

Click here to visit the game’s Steam page for purchase.

Team Sonic Racing was a welcomed surprise. The latest title in the line of Sonic racing games shows evolution. And with Team Sonic Racing, it proves that the series only continues to get better with each iteration.

By Logan Broadley53 mins ago
Reviews

By Kurt Perry24 hours ago
Reviews