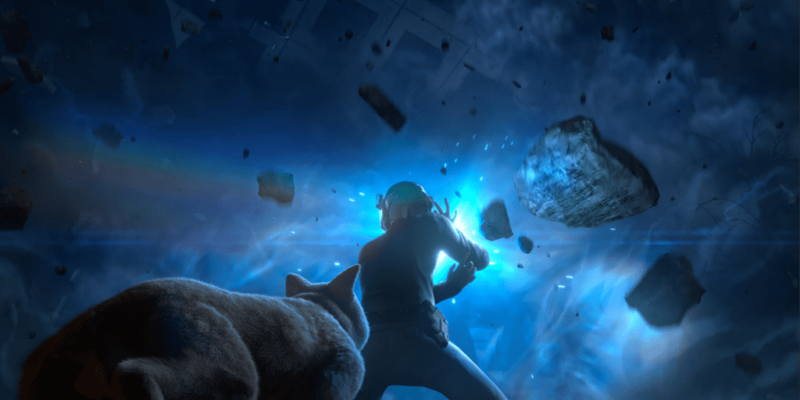 PlatinumGames has dropped a teaser for their newest game, known only as Project G.G. This marks the first time the developer has self-published a wholly new property and is already shooting its way up my most-wanted list. It’s billed as the third part in director Hideki Kamiya’s hero trilogy and the first in what I hope is a long line of self-published titles.

That isn’t to say that we can expect to see the game anytime soon. Kamiya and producer Atsushi Inaba have described the game as being in pre-development, so full development has yet to start on it. That being said, I’m greatly looking forward to seeing what Platinum does on their first endeavor with full IP control.

The Project G.G. teaser is quite intense. It begins with the sight of a city under attack by an unseen giant lurking behind a wall of dust and fog. People run for their lives to escape. The camera repeatedly focuses on a lone Shiba Inu in the street as everything goes to hell around it. We see an ominous shadow of a giant figure overhead and the camera pans back to reveal the outline of an Ultraman-esque giant hero standing to face the city’s threat.

We obviously can’t say for sure what anything is going to be, but it’s probably safe to say that you’re going to be a giant hero that fights giant monsters. Personally, I adore stories like that, and the idea of a PlatinumGames experience where I’m controlling a hero as he knocks giants into buildings with tremendous force holds a ton of potential to me. We’ve gotten games that attempted to do so before, of course, but they often don’t capture the sense of scale and impact that I’m imagining Platinum is going to be bringing to the table with Project G.G.

This title is the second surprise out of four at PlatinumGames’ “Platinum 4” website. It has been revealed that the third surprise is actually the opening of PlatinumGames Tokyo, a new Tokyo studio that will work on Project G.G. as well as live ops projects. The final project of the Platinum 4 is yet to be revealed but is said to be a “huge secret.”

The first project of the Platinum 4, of course, turned out to be The Wonderful 101: Remastered.