Techies are coming to Dota 2 next week, alongside All Random Deathmatch, A-Z Challenge support, and a whole lot more.

At this point it doesn’t look like this’ll be a huge meta-changing balance patch – although this is Valve, so maybe that just hasn’t been mentioned yet. Anyway, on with the update details.

So, Techies. The little bastards have four abilities: Land Mines (an invisible bomb that explodes automatically when enemies get near), Stasis Trap (an invisible trap that stuns people), Suicide Squad, Attack! (causes Techies to explode, doing massive damage to nearby enemies), and their ultimate, Remote Mines/Focused Detonate. Which lets you put down invisible bombs which you can then detonate manually, at the press of a button. You’ll be wanting a Gem or Necronomicon 3, I guess. Just don’t try going to your side-shop without true sight.

Techies will be coming to Dota 2 with a Swine of the Sunken Galley Arcana set which offers custom icons/animations/sounds/effects, a five-piece item set, inscribed gems for all four abilities, an in-game “Minefield Sign” ability, a chat emoticon, a Prismatic Gem to tint the item, and the fact the mine victims will see your mini-taunt. Which is unbelievably troll-ish, and as such fits incredibly well with these monsters.

And, obviously, there’s a new chest. Techies’ Bombastic Box contains a Techies commentator, a goblin courier in a Greevil costume, and a HUD skin. I suppose this is a good time to mention that Compendium owners will be getting a free custom taunt for the Techies, too.

So that’s the Techies-related stuff, but that’s not all for this Dota 2 update. Speaking of “all”, the update offers All-Random Deathmatch, a brand new game mode that assigns you a random hero – and gives you a new random hero when you die. Your team loses either by collectively dying 40 times, or by losing your Ancient.

You’ll be getting a Gallery of Triumphs, which grants you a trophy you can proudly show off every time you complete some sort of in-game feat. Like, say, beating the 10-Hero Challenge from the Compendium.

There’s also the All-Hero Challenge, which is basically the A-Z Challenge, only you’re not actually going A-Z. This assigns you a random hero in your profile; winning a match with them ticks them off the list and assigns you a new hero. Win with every hero, and get a trophy! You’ll also be able to see how long it took other players, on average, to beat that hero, and how many have completed the Challenge already. Honestly, not having it go A-Z seems entirely sensible, because otherwise you’d end up with teams composed of Abaddon, Alchemist, Ancient Apparition, Anti-Mage, and Axe. Which… isn’t actually the worst team imaginable, now that I look at it.

Right. That’s the stuff for everybody, but Compendium owners are getting some goodies too. 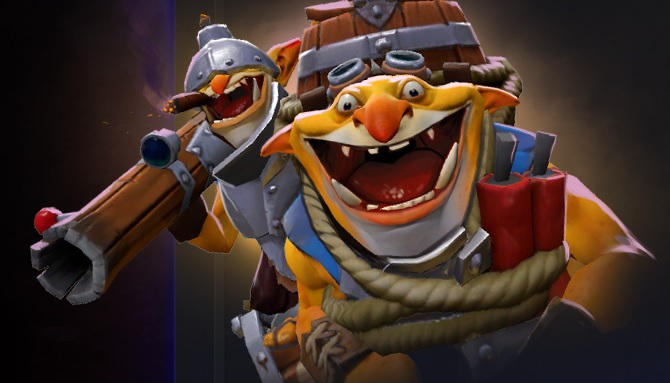 There’s the Techies taunt mentioned above, but that’s not all. You’ll be nabbing the Assured Victory Shout – a pre-match taunt that lets you predict victory for your team. If you use it and you’re right, your Victory Prediction gem gains a point. If you use it and you’re wrong, your gem’s points reset to zero. Get enough points, and earn a trophy.

Compendium owners will also be getting their flashy new multi-kill banners, which will make everything look a bit more spiffy when you get a whole lot of kills. So that’s nice. In addition to that, we’ll be getting the International 2014 Music Pack, a new music soundtrack for the game composed by Chance Thomas. Shove this into your Music slot in the Global Items, and you’ll get some nice new music to listen to while you get murdered incessantly by the Techies.

Aaaaand there’s the usual raft of little tweaks and fixes for Dota 2, some of which are pretty wonderful. Other players can’t put your items in their stash, or give them to/take them from the courier. You can alt-click items in enemy players’ inventories to warn your team that the enemy has that item, you can alt-click your gold or your buyback button to alert your team to your buyback status, and you can drop items from your stash when dead. Oh, and in bot news, bots will now wear your cosmetics, and there’ll be bot AI for Pudge, Riki, and Axe. Which is actually kind of fitting, being that those are three heroes that new players really need to learn how to deal with.

There are a few other bits and pieces too (some tweaks to the Workshop and third-party Compendiums, for instance) but I’ve covered most of the major stuff here. You can read the full Techies Update page over on the Dota 2 site to see absolutely everything, and I’d recommend you do so.

It doesn’t look like this’ll be the major balance patch, then, but as said above – you never know. This is Valve and they don’t tend to show all their cards at once (particularly with these big updates), but I still wouldn’t hold my breath.

Win a SPACECOM beta access code and enter the tournament