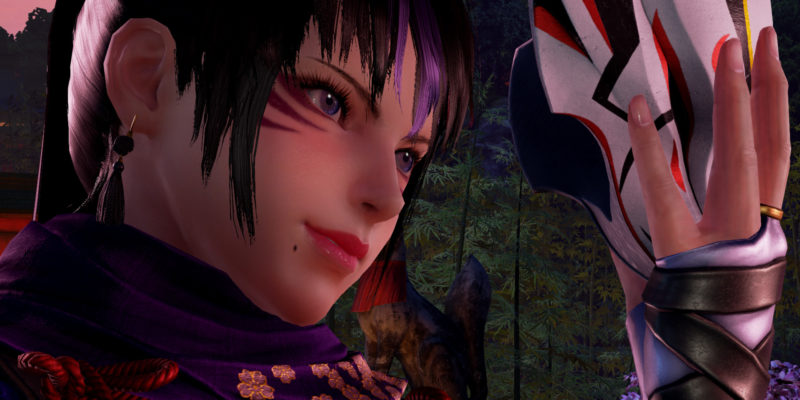 The King of the Iron Fist is still going strong as during this weekend’s Tokyo Game Show we got a new trailer for Tekken 7 Season 4. The trailer shows off the character that was strongly hinted at in July, now officially confirmed to be Kunimitsu. In the trailer, we see her first face off against Master Raven, and then against Yoshimitsu. During the trailer, we also get to see several of her moves, including her multiple teleport attacks. This is Kunimitsu’s first appearance in a mainline Tekken game since Tekken Tag Tournament 2 in 2011. However, this new character in Tekken 7 is actually the daughter of the original Kunimitsu.

Kunimitsu soundly defeats Yoshimitsu and before taking his sword, unmasks herself for the first time! Kunimitsu and her mother have a strong connection to Yoshimitsu and the Manji Ninja Clan. It looks like she is picking up where her mother left off in trying to steal Yoshimitsu’s legendary blade. The trailer is very cool and well-produced, just like all of Tekken 7‘s cinematic trailers. Afterwards, we got some more information from Bandai Namco on what else Tekken 7 Season 4 will bring.

First off, every character in the game will be receiving new moves. No specifics were given, but every character is confirmed to have something new added to them. The UI will also be updated to create a more “streamlined user interface.” A new top-level rank is also being added called “Tekken God Omega.” This will become the new highest level possible to achieve in online ranked matches.

More ways to flex on your opponent

Another new ranking system called Tekken Prowess is also being added. Tekken Prowess is calculated through a player’s highest owned rank, their total rank of all characters, play stats, and the number of matches played. This new system should provide players with a much broader sense of their overall skill in the game. Finally, the biggest announcement is that Tekken 7 will be receiving some form of online play enhancements. The much requested Wi-Fi indicator is finally (and thankfully) being added. Now players will finally be able to only play others on whichever connection they prefer (you know which one).

It was also stated that “response improvement” will be added, but what exactly that means is anyone’s guess. We can say for sure that it, unfortunately, won’t be the complete overhaul to the game’s netcode that it so desperately needs. However, any improvements to the game’s online capabilities will be more than welcome. Especially since all offline events are canceled for the foreseeable future. Kunimitsu and her Vermillion Gates stage will be available sometime this fall, and another new character and stage will be announced in the spring of 2021.

By Mike Straw18 mins ago
Hardware