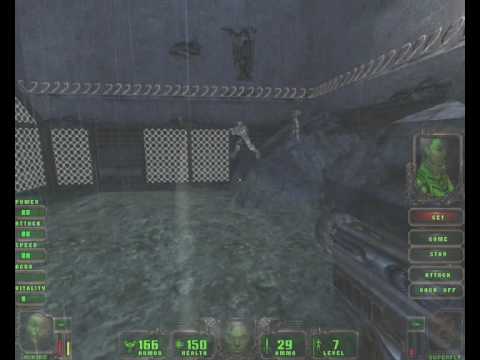 The term “original intellectual property” is tainted by corporate commodification, but the spirit of what it describes is invaluable to a healthy creative medium. You can’t reach Deus Ex: Human Revolution without the first Deus Ex (and, regrettably, the second one); nor can you get to Mass Effect 3 without the original. Sequels might bring in more money, but fresh, exciting ideas are what keeps the industry thriving.

This list features ten games which brought something entirely new, but, for one reason or another, were not picked up for an extended series. Since I’m the person writing it, it is resolutely PC-slanted. There are plenty of great, sequel-less games on other systems too, so this isn’t supposed to be in any way definitive. It’s just ten great games (well, nine actually … you’ll see) that never got a follow-up.

In my opinion, five of these would benefit from a sequel and five of them would not. Here’s why.

Needs a sequel: Anachronox.
As anyone who grabs Anachronox from GoodOldGames will find out, the game ends on a cliffhanger that sets up a sequel which never came. That’s not much of a spoiler; I see it more as cushioning the inevitable blow.

The game was released in 2001, just as the title’s Ion Storm Dallas studio shut down, so there was next to no chance of a quick return to wrap up the story with another weird and wonderful JRPG-inspired sci-fi noir narrative. 11 years on there’s still no sign of one, and project lead Tom Hall (of id software fame) no longer owns the IP. When I interviewed him back in 2009, Hall told me that “If I don’t do the game in the next 10 years, I’ll just write up the rest of the story and put it on my website for closure.” So expect a text resolution sometime in 2019.

Doesn’t: Grim Fandango.
I adore Grim Fandango. It may well be my favourite Tim Schafer-powered release (in a busy line-up). But, in a theme I’ll be returning to throughout this piece, the game had a fantastic, absolute conclusion. The journeys of Manny Calavera and Mercedes Colomar were resolved with no loose ends; as were the narrative arcs of the supporting cast. It’d perhaps be possible to revisit the eight underworld with brand new characters (or crowbar in some kind of reason for a prequel), but why risk sullying the outstanding original? Besides which, Schafer always seems happier coming up with brand new concepts. He’s previously stated that if he’d been able to make Full Throttle 2, it’s possible Grim Fandango would never have happened. On that basis, I’d rather have Brilliant New Title X With All New Scented Goodness than Grim Fandango 2.

Some kind of special edition HD remake with Schafer commentary would be much appreciated, though.

Needs a sequel: Zeno Clash.
Punching freaky bird men in the face: it never gets old. Or does it? The only way to answer that vital question is for Ace Team to release another birdman-biffing adventure set in the bizarre land of Zenozoik. Zenozoik was actually Zeno Clash’s original title, and this incarnation of the game supposedly mixed elements of sandbox exploration with unspecified RPG features (before Ace Team felt this was a bit ambitious for a small, independent studio and cut back).

To me, this sounds like the perfect set-up for a sequel. Keep the first-person melee combat, but add more free roaming and dream up even more surreal sights for players to visit (the original game had a fairly standard map-to-map progression). I’m not sure if Ace Team has the resources to be able to undertake such a project yet, but it’d be tremendous to see them revisit their initial plans for the title. Give me more Corwid of the Free, please.

Doesn’t: Loom.
Much like Grim Fandango, I think the musical-puzzling of Loom is best left as a stand-alone. Unlike Grim, Loom does leave the door open for a sequel, but walking through it would undo the power of the game’s ending. In it (sorry, spoiler alert here), protagonist Bobbin Threadbare escapes from ‘Chaos’ and transcends through the literal fabric of space and time to join his mother (who hangs out in a strange, celestial version of Swan Lake). The ending is bittersweet, as although it results in some form of closure for Threadbare, it leaves Chaos free in the world. In effect, I think this represents some sort of karmic balancing; the realm moves away from staid order and has to deal with the inevitable strands of chaos that freedom brings with it. Doing any kind of sequel (and according to designer Brian Moriarty two were discussed) that involved the ‘defeat’ of Chaos would, I think, be far too much of trite, Hollywood ending.

Needs a sequel: Terra Nova: Strike Force Centauri.
The decision to self-publish Terra Nova left Looking Glass Studios in a perilous financial position and ultimately contributed to their untimely closure. That wasn’t great, obviously; and neither were the game’s full-motion video segments, featuring a rag-tag collection of what I can only assume were relatives of the developers hoping to pad their acting CVs. What made Terra Nova stand out was its combination of jet-propelled, powered-armour combat (in first person) and tactical squad control across environments that, at the time, seemed gigantic. Another game based in the same universe (one where rebellious Solar System colonists battle an oppressive Earth) would be most welcome, even if it were just a pseudo-remake in the hands of a competent developer. Kind of like Bohemia Interactive’s forthcoming Carrier Command.

Doesn’t: Alpha Protocol.
Now look, Alpha Protocol was probably my favourite game of 2010 and is likely to remain one of my favourites of all time, thanks to its reactive narrative and the degree to which player choice influences the outcome of the story (not to mention splendid dialogue and characterisation). You wouldn’t require many fingers on your hands to count the number of games that can be played through three or four times with genuinely different paths and outcomes, but Alpha Protocol is one of the select few.
That, in a way, is why I’m including it in this category. I want more (many more) games in this style, but I’m happy to let Mike Thorton, Steven Heck and the rest of the crew be a marvellous one-off. In any case, Obsidian’s current financial problems probably rule it right out. Still, I hold out some tiny sliver of hope for Alpha Protocol’s spirit to one day be implanted into a small, Kickstarter-backed isometric RPG, written by Chris Avellone.

Needs a sequel: Vampire The Masquerade: Bloodlines.
Ah, Troika. Yet another incredible, tragic development studio whose ambitious games exceeded the actual time and resources at their disposal. Granted, Bloodlines is based on the Old World of Darkness pen-and-paper RPG system by White Wolf, so it’s not entirely original by any means; but Troika took that system and fashioned a compelling Computer-RPG about vampires that was funny, political and, most impressive of all, somewhat believable. In the sense of ‘if vampires were real, they might act like this’ rather than ‘vampires totally are real, come seem my poster of Edward Cullen’, that is.
With Troika long-gone and former staff scattered around all over the place, the closest thing to a sequel we’re likely to get is if CCP Games ever gets around to finishing their World of Darkness MMO. Last I heard, that seemed a fair way off.

Doesn’t: Planescape: Torment.
I agonised over this one. I juggled it back and forth, putting it in the ‘needs a sequel’ category for a bit before finally moving it back to ‘doesn’t.’
Here’s my reasoning: Torment is a phenomenal isometric RPG, one with a thematic core that can actually compete with highbrow literature (no huge surprise there, it has enough text to basically be a novel). The Planescape world is huge (again, it was a pen-and-paper RPG first), so another game set in the same universe could easily be done. But Torment is a game about seeking repentance and final oblivion for the protagonist, it’s a game where treading and re-treading the same steps is presented as a terrible curse, it’s a game, in short, whose entire message can be read as “stay the hell away from sequels.” Let’s hear that cry and abide by it.

Needs a sequel: Beyond Good & Evil.
Mostly so the whole sorry saga can be brought to an end. I don’t mean to suggest that the game itself is a sorry saga, but the on-again, off-again, maybe-on-again approach Ubisoft has shown towards a potential sequel is now Beyond Irritating & Annoying. It took them until about 2008 (five years after the first game) to even admit they were thinking about a follow-up. Then things went pretty dark until Michel Ancel mentioned it again in 2010, but said development would take “a while” (you don’t say). After that, the team took an extended break from Beyond Good & Evil 2 in order to make Rayman Origins.
They’ll probably get around to finishing the game eventually, but the longer development takes the more nervous I get about a sudden loss of funding, or cancellation, or all of Ubisoft being swallowed by a shark. There aren’t many videogame characters as progressive as Jade (or worlds as entertaining as hers), so we could do with keeping them alive.

Doesn’t: Daikatana.
Well, obviously. This doesn’t really qualify under the ‘Best PC Games’ description, does it? There probably are some people out in the internet wilds who want to babysit Superfly Johnson for a few more hours, but I imagine they’re a minority akin to big game hunters in PETA. I’m including this game because developer John Romero has recently confirmed beyond all doubt that there won’t be a Daikatana 2. When even the main creative drive behind a game wants nothing more to do with it, you can say with absolute certainty that it doesn’t need a sequel; which means I can safely claim there’s at least one objective entry in this list. Hurrah.

At the same time as ruling out a sequel, Romero hinted that he might not be done with old school first-person shooters. If that’s true, cross all your freezable extremities that his next project is more Doom than Daikatana.