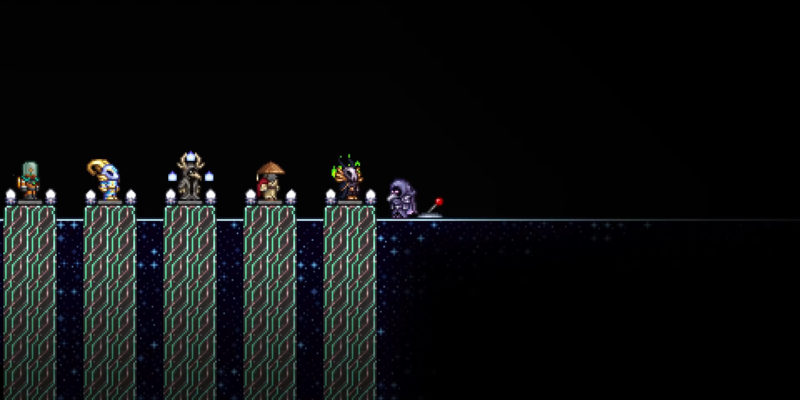 You know what they say, you can’t keep a good game down. At least, not for long. Back in April, developer Re-Logic announced it was putting the final pin in its explosively popular survival game, Terraria. Journey’s End, which landed in May, was thought at the time to be a promise. The fourth major update was to bring with it one last helping of content before curtains came down. Apparently, the developer wasn’t quite ready to say its final farewells. Today, Re-Logic launched Terraria 1.4.1, and it is the last content update for the game. At this point, anyway.

The update isn’t as major as Journey’s End, mind. It does, however, include some fresh additions that fans should appreciate. Earlier in the year, the company ran a vanity contest for its fans. Five winning designed were chosen and shown off on the Terraria forums in April. Vanities such as the Plaguebringer’s Robes and the oddly adorable Floret Protector are now available in the game. A brief trailer created by Re-Logic shows what they look like in all their pixelated glory. The update also adds another NPC character for towns. You’ll also be able to unlock 15 more achievements.

Most of the additional details behind the pack have been discovered by the Official Terraria Wiki. The page for 1.4.1 goes on to include other additions for the pack, including some rebalances for accessories, and a new music theme by composer Scott Lloyd Shelly. Take note, however, that the details were gathered from announcements and hints dropped by Terraria team members and may have since changed.

When TV has gone to your head

The end of the trailer does seem to tease something, doesn’t it? A lot of fans have already figured out the reason behind the glitchy TV screen. A TV Head vanity was submitted to the vanity contest, but it wasn’t among the chosen five. You can see it, purple suit and TV head in all, posted by user drootsuit in the Terraria subreddit. Apparently, even though it didn’t win the top-five spot, Re-Logic is apparently including the vanity regardless. It’s kind of a sweet gesture, really.

Terraria update 1.4.1 is out starting today. According to the wiki, there may be small tweaks and changes in the coming week, but they may not be substantial.