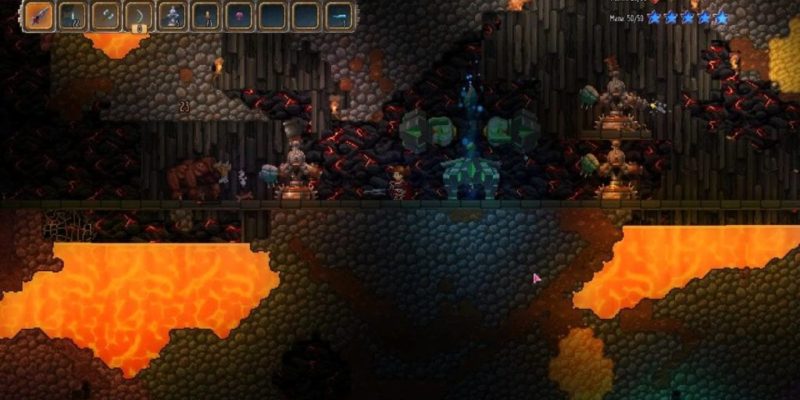 Terraria: Otherworld was announced as a not-sequel last month, but the reveal wasn’t accompanied by a huge amount of detail. Re-Logic took the game to GDC for a more expansive unveiling; but for those who weren’t at that event, they’ve put up this handy forum post.

Though not Terraria 2, Terraria: Otherworld takes place in an “alternate dimension” within the Terraria universe. As was already mentioned back when the game was revealed, players will be fighting back against a malevolent force that has corrupted the world. Mechanically speaking, this will combine the Terraria sandbox mechanics with more RPG and strategy bits.

It’s these RPG and strategy bits that are explained a bit more in the Re-Logic post.

Players in Terraria: Otherworld will have goals to work towards, but they will be non-immediate (to retain the freeform exploration.) The narrative is not fixed and will consist of certain dynamic events and story elements. This means different players (or the same one, replaying the game) will have the story unfold in a slightly different way.

NPCs will be more developed as actual characters, rather than just being “that merchant guy.”

There won’t be selectable classes or any “set in stone” choices, just improvements in skill as a player naturally settles in to a play style.

In terms of strategy, one of the long-term goals of the game is to push back malevolent corruption. Your best method of doing this will be “finding/crafting and then activating Purifying Towers.”

Purifying Towers need to be defended, because the resonance of their crystal power supplies, rather unhelpfully, attracts enemies. In order to protect your towers in Terraria: Otherworld, you’ll be constructing customisable ‘Wartowers’ and engaging in a spot of tower defense. You can see this towards the end of the GDC trailer (below.)

According to Re-Logic, they’re aiming to have Terraria: Otherworld out in 2015. They stress this will be a release of the full, finished game and say “We will absolutely not be participating in an Early Access program.”