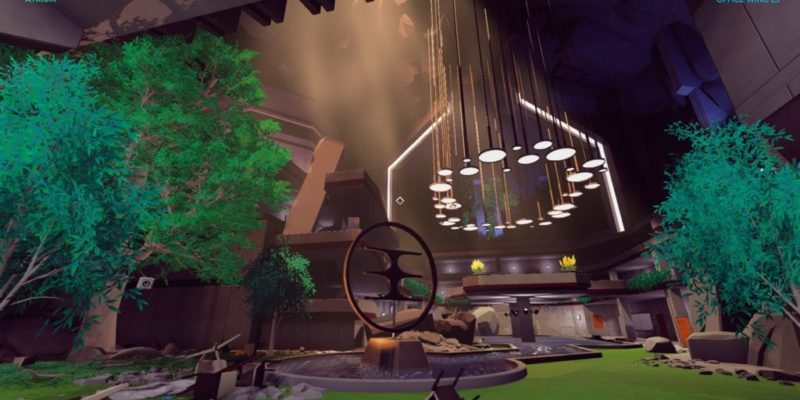 What do you get when you mix a first-person puzzle game, a dystopian narrative about an evil corporation, and an all-star voice acting cast? Well… Portal, of course. But that’s old news. Countless titles have tried to capture the same magic that made Portal an instant classic, and just as many have failed. There’s a certain balance among endearing dialogue, narrative transparency, and engaging puzzles that has yet to be recreated. In The Bradwell Conspiracy, however, newbie developer A Brave Plan doesn’t just attempt to emulate its spiritual predecessor. No, it aims to refine and perfect its formula for a new generation. But does the Bossa Studios-published title live up to its own lofty goals, or do its vocal performances outshine its gameplay? 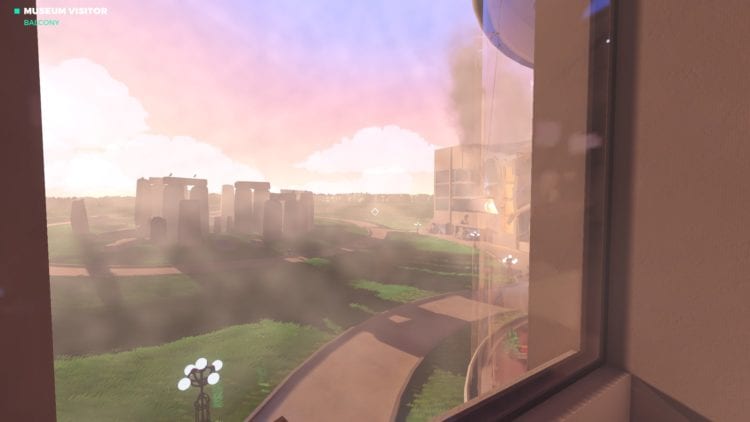 The Bradwell Electronics facility at Amesbury sits directly opposite Stonehenge and offers an especially British cast.

In the year 2026, you’re an unnamed attendee of Bradwell Electronics’ Stonehenge museum during the Bradwell “clean water and energy summit” to witness the corporation’s newest breakthrough. Suddenly, a massive explosion occurs and toxic fumes render you unconscious. When you wake, you find the rest of the facility completely abandoned. Accompanied only by the artificial intelligence in your “guide” glasses, you must find a way out. You must traverse various platforming sections and environmental puzzles on the journey to escape.

Your distress signal soon lands you in the company of Dr. Amber Randall, a Bradwell employee also trapped in the destruction. Amber is able to utilize her knowledge of Bradwell’s inner workings to help the player progress, unlocking doors, hacking equipment, and providing colorful commentary along the way. Amber (voiced by Broadway actress Rebecca LaChance) is incredibly charming, quirky, and multi-dimensional, and she does the majority of the talking throughout the game’s 5-6 hour story. 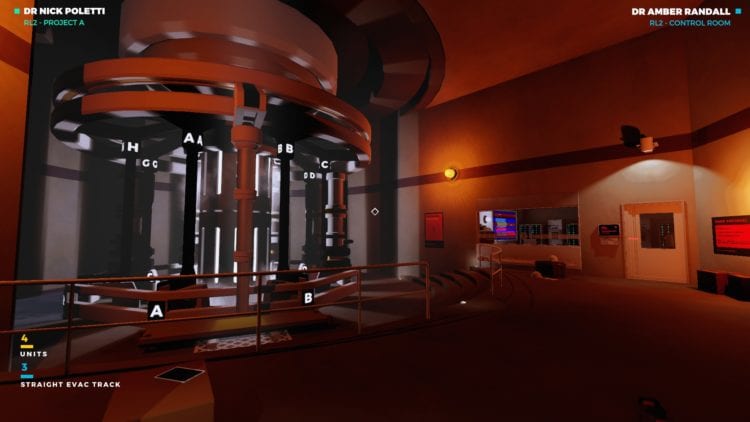 Your path to escape will take you from the bright skies of Amesbury to the depths of an underground lab, all of which maintain a stunning minimalist art style.

The player is unable to communicate with Amber due to their injury, instead having to send pictures via their guide glasses. Taking a picture is done via the spacebar and can be executed any time the player gets stuck, wants a bit of elaboration on a piece of lore, or just gets a bit lonely. This picture-based communication system works flawlessly and is only bolstered by Amber’s excellently written dialogue. Check out the video below for an example of The Bradwell Conspiracy‘s photo communication.

A Brave Plan makes interesting use of their blank-canvas protagonist, forcing the player to pick up other employees’ guide glasses in order to gain access to previously inaccessible areas and information. When the protagonist dons an employee’s guide, they are treated as if they are that person, which gives the player unique insights into life at the company before the catastrophe. These moments spent exploring the labyrinthine hallways and detailed environments of Bradwell Electronics are some of the strongest The Bradwell Conspiracy has to offer. It’s clear that A Brave Plan spent a ton of time crafting a world that truly immerses its player, imploring them to answer the game’s most pressing questions.

But then again, maybe I care more about the act of answering these questions than the answers themselves. Overall, while The Bradwell Conspiracy sets itself up for greatness with excellent writing and charming vocal performances, its plot takes a few questionable turns towards mediocrity. Into the latter half of the game I began to see a bit too much influence from the likes of Portal and Bioshock, and it quickly became apparent where the plot was headed. Nevertheless, I can’t understate how enjoyable the path to mediocrity was for me, and I genuinely believe The Bradwell Conspiracy is a masterpiece of storytelling (even if that story has already been told).

Regardless, the way The Bradwell Conspiracy allows the player to interact with Amber (and subsequently the world) is gripping. Amber reacts so effortlessly to the player’s picture inquiries  as to genuinely mimic reality, and it does a fantastic job of building a deep and intimate connection with her. While occasionally the player will receive generic “I didn’t quite get that” responses that slightly break the immersion, more often than not I was met with exactly the response I was looking for. 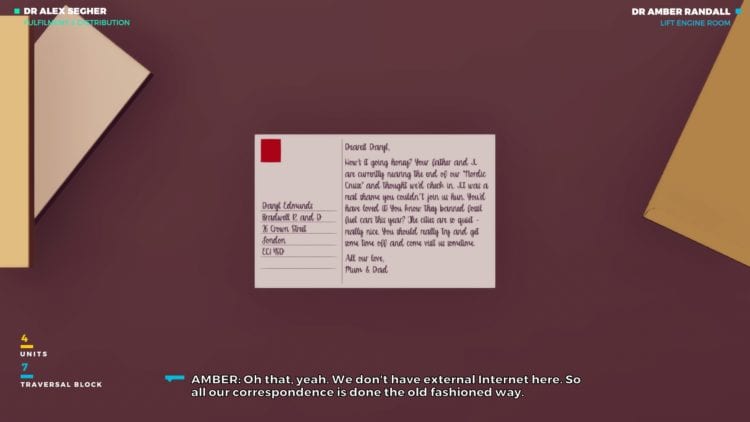 The Bradwell Conspiracy doesn’t excel in character development despite its mute protagonist, but rather because of it. There is a true sense of connection between overly enthusiastic Amber and the player, a connection that provides depth when the gameplay falters — which it often does.

Print your own path

The majority of puzzles in The Bradwell Conspiracy make use of Bradwell Electronics’ greatest creation, the “Substance Mobile Printer” (SMP).

As comedian Jonathan Ross lays out for you during your employee induction (Ross’ only contribution to the game), the SMP is able to “reclaim” certain items and then print an identical copy in a new place. In order to do this, the SMP requires both Bradwell Electronics’ self-made element “Bradwellium” and a blueprint of the item you’d like to print out. 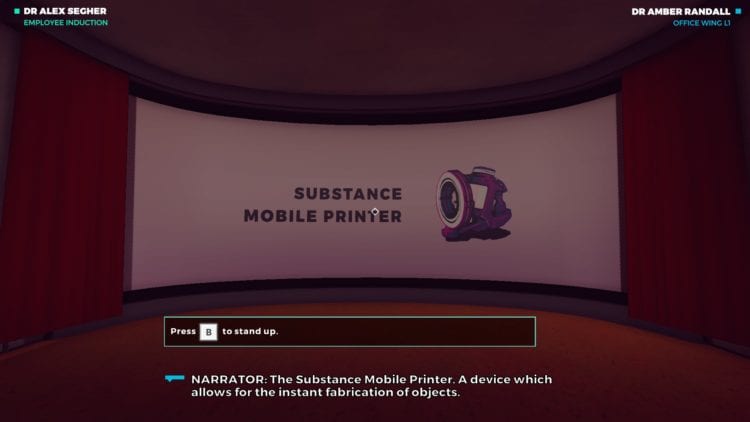 The gameplay loop of searching for Bradwellium, finding blueprints, and printing copies is much more complex and entertaining than it appears. Sure, shooting the SMP doesn’t provide the same simplicity or satisfactory sound of something like the Portal Gun, but there are endless possibilities to the concept.

At times, The Bradwell Conspiracy is a vertical platformer, requiring the SMP to construct a path to previously inaccessible areas, while other times it’s the key to solving a pattern puzzle. Regardless of what it is, the SMP is endless fun. Unfortunately, clunky blueprint selection and sometimes unpredictable object placement can make things a tad awkward, but The Bradwell Conspiracy‘s most positive moments vastly outweigh its quirkiness.

The whole of The Bradwell Conspiracy is composed of about six levels, each of which introduces a new platforming mechanic. This leads to progressively more difficult puzzles, none of which are exceedingly difficult. There was only one brief point where I felt “stuck,” and overall the gameplay sections provide fun momentary departures from exploring the world. Occasionally you’ll have to wait for Amber to react to your commands — especially during the last couple of levels — which really causes the gameplay to drag. These puzzles are weighed down even further by obnoxiously vague directions, which feel like they only exist to pad run time.

From a technical perspective, The Bradwell Conspiracy didn’t blow me away. My PC rig (consisting of an i5 9400f, RX 570 4GB, and 8GB of DDR4) is more than enough to run most modern AAA games at consistent frame rates, but The Bradwell Conspiracy was unable to run comfortably at 60 frames per second, even when I dropped the texture settings down to Medium. This led to a bit of an uncomfortable choppiness with the mouse movement. Perhaps it would be better suited for a controller (or perhaps now I can justify upgrading my rig), because luckily The Bradwell Conspiracy doesn’t require hyper-precise mouse movements to complete its various puzzles and platforming sections. Weirdly, these issues only persisted through the first 4 hours of the game, whereas I was treated with a rock-solid 144 FPS for the game’s finale. This points to a lack of optimization, which could easily be overlooked by players after an inevitable performance patch.

What can’t be overlooked, however, are the glitches. The first three levels of The Bradwell Conspiracy play perfectly, with clearly defined boundaries and environments that are polished. The final few levels on the other hand are crammed with technical glitches that made me want to rip my hair out. Whether it was getting stuck on geometry that would force a restart (especially frustrating when you consider the game’s long loading times) or getting completely stuck because ladders would just stop working, the game’s latter half was more cumbersome than enjoyable, which really stinks.

Technical issues aside, I found The Bradwell Conspiracy‘s gameplay to be extremely well-paced, with unique levels that were complicated enough to keep me engaged but not hard enough to frustrate me. Combine this with top-notch voice acting and hilarious writing, and you have a game that wouldn’t feel out of place in the Portal universe. All of this from a studio on its first release — talk about setting a precedent.

The Bradwell Conspiracy is a masterpiece of narrative storytelling, brimming with wit and nuance throughout its 5-6 hours of so-so gameplay. While its latter stages begin to drag slightly, The Bradwell Conspiracy is well worth its 14.99 GBP asking price. This one is an essential for any Portal fan, and I can't wait to see what A Brave Plan has in store for their next offering.

By Kevin Carignan3 days ago
Hardware

Transient review — Across the universe

Watch Dogs: Legion review — For we are many

By Lawrence Le5 days ago
Reviews