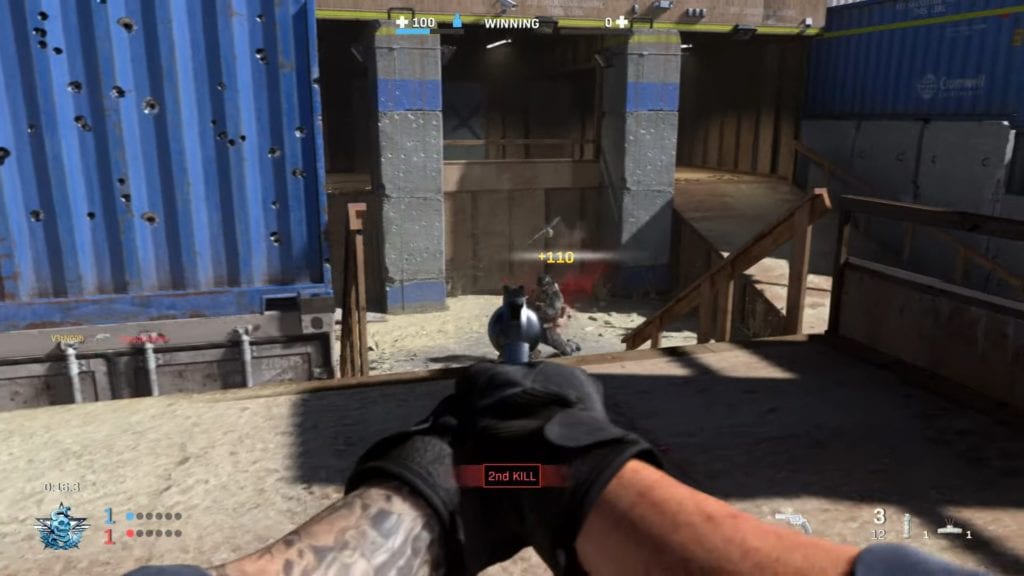 Gunfight games are super quick, but can be tactical and intense when they come down to the wire.

I wanted nothing more in my childhood than to be an adult and do adult things. I wanted to do whatever I wanted, whenever I wanted. Realistically, this just boiled down to playing video games any time I wanted. Now that I’m well into my 30s, things are a bit different than I had imagined they would be. For starters, adolescent me didn’t account for all of the responsibilities that adult me would have. Bills, a job, more bills, and even social engagements bog down everyday living. When I’m not engaged in these activities, there’s no shortage of other life priorities fighting for my free time.

The one thing that I’ve missed from shooters like Call of Duty: Modern Warfare is the ability to level up and unlock new items without sacrificing the core gameplay. For example, within Modern Warfare there are a number of different games that make up the multiplayer experience. You’ve got the standard Team Deathmatch where two squads go head-to-head killing each other for points until the point goal is reached. Then there are modes like Cyber Attack where one team must take the bomb and deliver it to a point while the other team tries to defuse it. Domination is another one where you fight for control of three different points on the map. So, instead of just mindlessly killing one another, you’ve got to deploy some strategy and teamwork to achieve the point total and win.

It’s these styles of matches and modes that are perfect for someone who has a limited amount of time to play. Each match, although challenging, is fairly brief. I placed all three of these modes into my match filters so that I would only be placed in these. They won’t have you investing the kind of time that a battle royale game would, especially if you find yourself within the remaining teams still alive. This makes the Call of Duty: Modern Warfare multiplayer perfect for players new and old to find familiarity.

The Call of Duty franchise has always had some sort of gimmick when it comes to unlocking new items. Players get in-game items like banners, gun decals, and weapons to sport during matches. At the same time, there is still a sense that you’re not missing out on the core gameplay experience if you don’t have a specific optic or attachment. And with cross-platform play enabled (if you’re into that), there isn’t much time spent in the menus prior to a match connecting and starting. Heck, I only even had time to tinker in the Gunsmith menu but a few seconds before connecting to the next game.

I found that unlocking new items, at least this time around, wasn’t overwhelming or daunting like I had remembered it. Even unlocking the custom loadouts hasn’t felt like a grind like it did in the past. I wasn’t playing match-after-match-after-match just to have the ability to customize things like my killstreak rewards. Even within a few hours, I had unlocked the stock, optic, and perks that I had wanted, yet there was still a lot more to start working towards.

Reminds me of simpler times

The one thing that resonates most with me is the way Modern Warfare feels familiar without feeling dated. Maps like Hackney Yard are littered with storage containers, train carts, and small buildings. This was one of the levels included during the beta period. It’s these types of maps that bring an old close-quarters-style map and look at it through the lens of new mechanics, such as your Field Upgrades. These give you additional abilities in-game, such as dropping a resupply munitions box that isn’t assigned as a killstreak reward. These too can be upgraded, opening up new abilities like silencing your steps for a short period of time. These are akin to the legend abilities in Apex Legends, adding another layer of strategy to any map or mode.

I’m curious to see how the Call of Duty: Modern Warfare multiplayer evolves over its lifespan. Will it welcome limited events like Call of Duty: Black Ops IV has? I’m hoping that a Modern Warfare 2 remaster/reimagining isn’t in the works just yet. It would be nice to give players like me that have limited free time the ability to enjoy the game before the next one comes down the pike. This is especially the case being that, even while I write this, all I can think about is jumping back into some matches or maybe even starting on this here campaign that I’ve heard so much about.

Now, if they could only do something about that initial download size.

Hearthstone teases next expansion by asking you to ‘choose wisely’