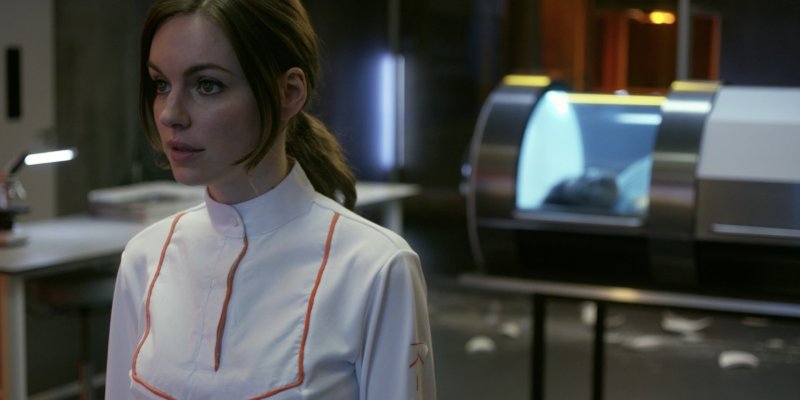 With the success of games such as Late Shift, Her Story, and the interactive Netflix movie Black Mirror: Bandersnatch, it appears as though ’90s-style interactive full-motion video (FMV) adventure games are enjoying a minor comeback. Of the games looking to ride that wave, The Complex is one of the most promising. Written by Lynn Renee Maxcy, who is part of the writing team behind the Hulu show A Handmaid’s Tale, The Complex tells a story about a human-created Nanocell virus that was designed to save humanity but might end up dooming it instead. At least that’s what we’re initially led to believe the story is about.

The Complex promises to be a sci-fi thriller, but it ends up being an off-the-rails escape room. Players control the decisions of Dr. Amy Tenant, who is on the verge of completing Nanocell technology. The purpose of these synthetic cells is to mend injuries by regenerating tissue, blood, and bone cells. However, something goes catastrophically wrong when someone connected to the project starts vomiting blood in the London subway. Instead of becoming a universal cure, the Nanocells become a deadly communicable disease.

Patient Zero is taken to a secure underground viral research facility, and as Amy tries to assess the situation, a trio of armed assailants show up and try to break into the lab. Players guide Tenant as she tries to figure out what the hell is going on. While doing so, she needs to determine who to trust, why random people are trying to kill her, and how she can get out.

If you were to compare this experience’s decision making aspects to adventure games such as Telltale’s The Walking Dead or the interactive film Black Mirror: Bandersnatch, The Complex leans completely toward the latter. The lengthy cinematics are beautifully shot and reasonably well acted, but don’t mistake this hour-long movie for a game.

Almost all the choices are binary, with no opportunity to pick “neither,” and many lead to the same outcome. Simply put, most of your choices don’t impact the course of the narrative. For example, no matter who you assign to perform a certain hazardous task, the same person always ends up doing it and dying.

The level of meaningful interaction is sparse even by the standards set by today’s tiny handful of FMV adventure games. There’s no running to multiple locations to find clues like in Late Shift, no puzzle elements as there are in Her Story, and no unlockable dialogue choices like those in The Shapeshifting Detective. The white, sterile laboratory where most of The Complex takes place is functional and well-designed, but it doesn’t compare to the eerie atmosphere of The Bunker. 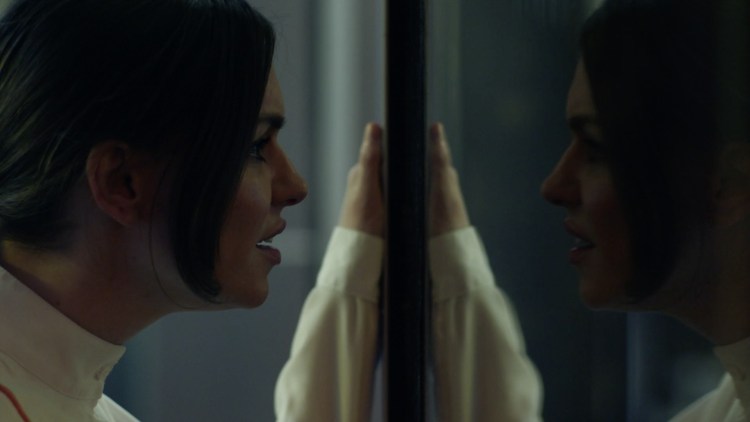 Get comfortable. You’ll be here for a while.

They’ll remember that… for a little while

None of that necessarily makes The Complex a bad experience, but the film is dragged down by its large cast of throwaway characters. There are only three meaningful characters, including the protagonist, throughout the entire experience. The rest either die soon after they’re introduced or intermittently drop in via short video conferences in an attempt to seem relevant. One character’s contributions happen almost entirely off-screen, which made me wonder why the developers bothered to hire an actor for the role at all. Someone could have literally phoned in a performance and it wouldn’t have made much of a difference.

Of the three vital characters, there’s Dr. Amy Tenant, whose personality is decided by the player’s decisions. Then there’s Reese Wakefield, a doctor with which Amy has a complicated, possibly romantic, history with. He’s also way better at computer hacking than practicing medicine. Lastly, there’s the patient, who insists that she’s not a terrorist while constantly acting like she wants to die as the most obnoxious, cryptic, and inept bioterrorist on the planet. As players try to unravel the mystery behind Amy’s personal and professional life, they get to decide how closely she sticks to the Hippocratic Oath and whether she wants to rekindle a romantic relationship while being trapped deep underground. 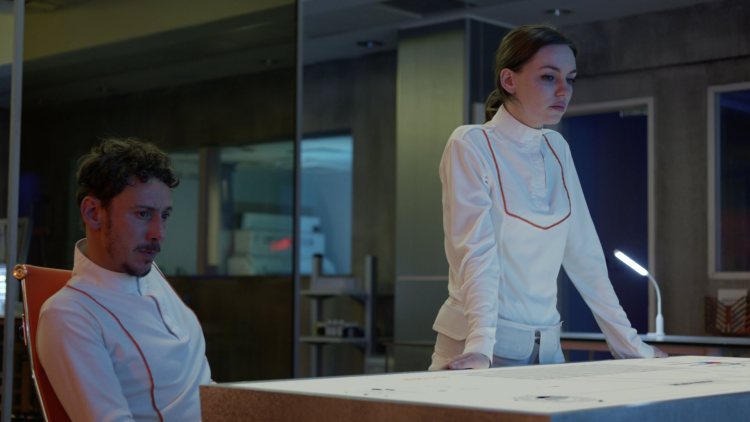 Love in a time of Nanocells.

The Complex’s interaction comes from how scenes play out differently according to your decisions, mainly in small ways such as different bits of spoken dialogue. In one of the early scenes, Amy can either engage or ignore a drunk investor who is disrupting her presentation. He’ll either be calmed by her response or will decide to pull his funding, but neither outcome has a significant impact on the narrative.

More important decisions impact Amy’s relationship with the people around her. For instance, being kind to Reese leads him to notice when Amy needs help, which prevents her from falling and hurting herself. However, the system is undermined by the fact that his help just leads to Amy injuring herself in a different room.

But the most egregious issue is how many of the relationships depend on coin-flip decisions. For instance, the opening scene’s choices involve two patients and whether Amy should individually speak to them with levity or seriousness. However, Amy’s quick hello doesn’t provide any clues about what they might respond best to. So, whether these patients end up trusting her comes down to a 50/50 guess. 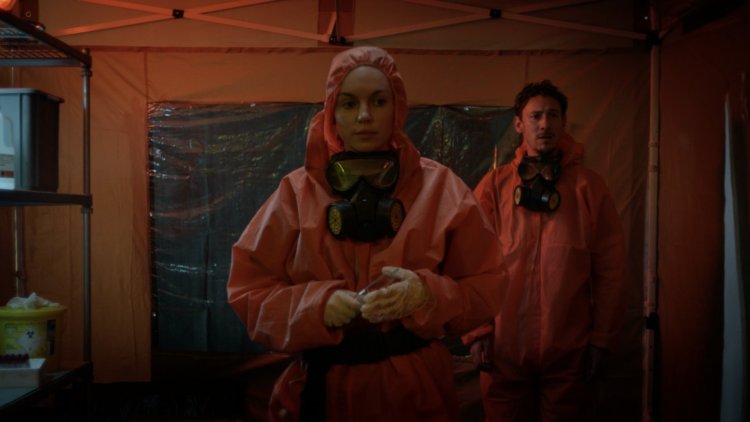 Sometimes the best choice is to do nothing.

Usually, the joy in playing these adventure games is in replaying them. You get to make different choices, uncover new details, and get new endings in a Groundhog’s Day fashion. But aside from a couple of interesting yet insignificant cut scenes, there is practically nothing new to find in replaying The Complex. All of the story elements are revealed in a single playthrough, and except for two or three key decisions, there’s no opportunity to alter the path of events. Newfound knowledge makes no difference. You can discover that someone broke into Amy’s computer, but you can’t use that knowledge as proof of the facility’s lax security or to accuse someone of being a spy.

All logic and continuity are thrown out the window when the end sequences start. Mistreated characters will offer to sacrifice themselves. Characters who like you won’t hesitate to kill you. People are suddenly able to walk into hazardous areas without protective gear. Someone who had nothing to do with anything ends up being the mastermind behind everything. Replaying the film highlights how nonsensical the plot is and how quickly it falls apart. It also leads to questions best left unanswered, like where someone wearing a hospital gown might hide a sizeable USB drive for several hours. 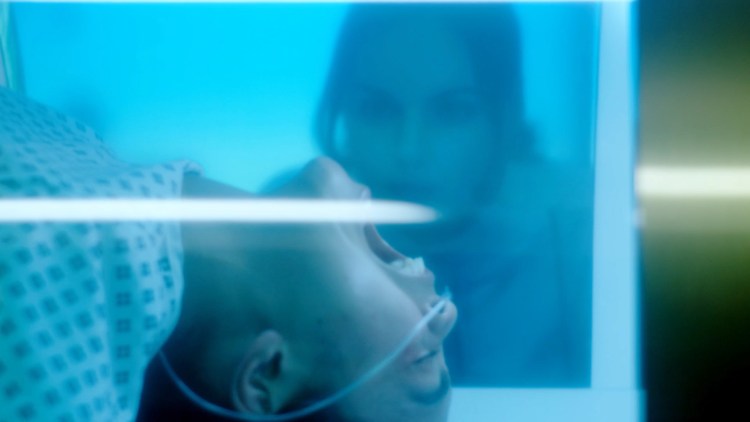 There are technically nine endings in total, but most either completely reuse one of four finale cinematics or offer minor variations to them. Decisions that should have a major impact on the final scene – like whether or not the patient is alive at the end – simply don’t. Eventually, the inconsistencies, dead ends, and disappointments become too much to ignore.

The Complex is entertaining for one, maybe two playthroughs. But like with movies, the law of diminishing returns goes into full effect after that. You can skip over scenes that you’ve already watched, which is a welcome feature that also inadvertently shows how much wasted potential the film has.

The Complex's potential gets lost amid weird subplots, throwaway characters, and a ton of plot holes. With so few meaningful choices, it's not an experience worth repeating more than once.