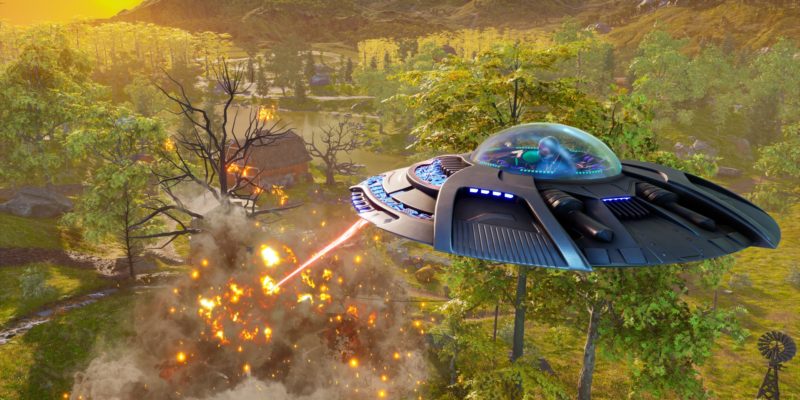 If being in the midst of a global pandemic isn’t enough of a disaster for you, how about an alien invasion to spice things up? The long-awaited remake of Destroy All Humans is set to launch in just a few months. Furon Chryptosporidium, a.k.a. Crypto, is back and in higher resolution than ever before. What’s more, he has a message for all of us puny, laughable Earthlings:

I wanted to let you know that my Abducto Beam is finally ready and I’m journeying Earthwards right now. If my calculations are correct then P-Day – that’s Probe-Day to you mortal meat morsels – is set for July 28th, 2020. On that day I will officially Destroy All Humans!

I’ll see you future-victims soon on PC, PlayStation®4, and Xbox One™!

The return of Crypto

I’m not gonna lie, it’s a little weird that he’s aware of video game consoles and that he’s coming to them. But I’m certainly not going to correct him, so we’ll just have to leave that be.

All that aside, not only did we get a launch date, but a new trailer as well:

The game is set to provide players with the original game but decked out with a whole new coat of paint. You’ll run around as Crypto in an open world and lay waste to everything that stands in your way. With a multitude of vehicles and gadgets at your disposal, the forces of Earth don’t stand a chance. Plus, if you pre-order Destroy All Humans on Steam, you’ll get access to a special skin pack that features the evil clown skin shown briefly in the video above.

Destroy All Humans will be sold for $29.99 USD on PC. We have just three months to go until we finally get to jump back in. I don’t know about you, but I’m very much looking forward to seeing fictional humanity get taken to task, as opposed to the real ones. One thing I’m interested to see is, if this game is successful if that means we’ll see the sequels get remakes too. Perhaps Activision’s Crash and Spyro remake trilogies have spoiled us, but it sure would be fun to see the rest of Crypto’s adventure get the remake treatment.