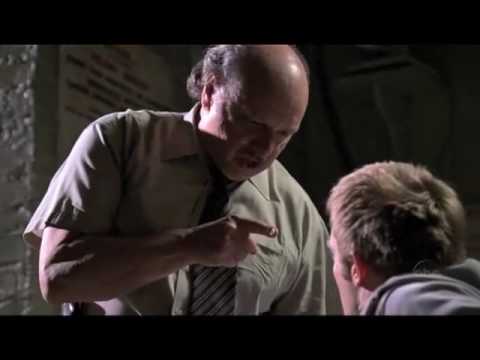 Rival Games, Finnish developers of The Detail are clearly quite fond of two things: Telltale’s brand of moral dilemma-driven interactive fiction, and harder edged cop dramas like NYPD Blue. The game’s store page ambitiously cites the more contemporary Wire as an influence, but throughout this first episode my mind kept drifting back to Sipowicz.

Disenchanted detective archetypes notwithstanding, it’s presumably no coincidence that The Detail’s primary protagonist Reggie is a balding, mustachioed chap with a grudge against the system and a penchant for roughing up suspects when lives are on the line. 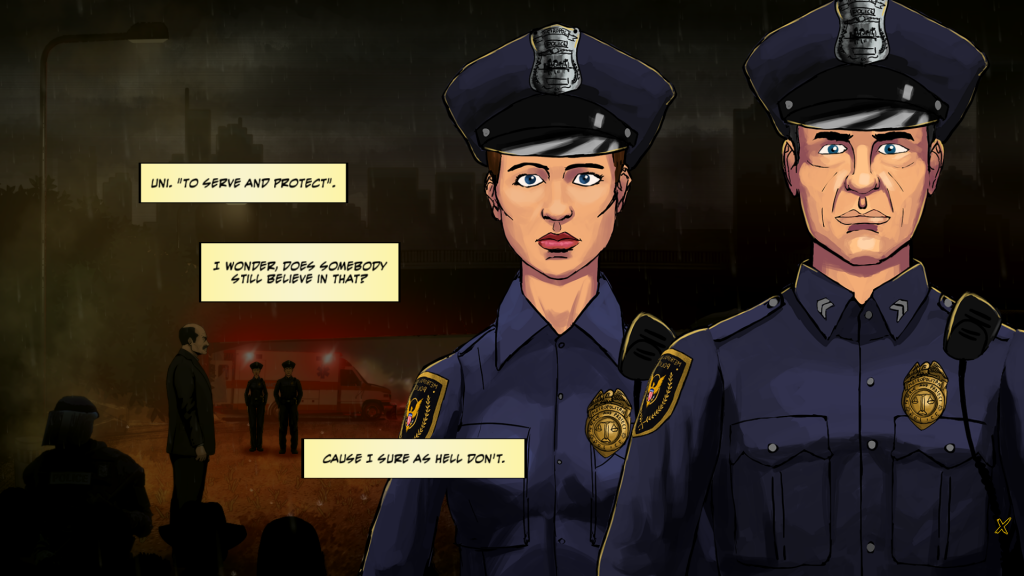 The game’s prologue gives you ample opportunity for the latter, as Reggie (and aging partner Tyrone) find themselves interrogating a known sex offender for the whereabouts of a missing girl. Cut to several months later, as the suspect walks on the grounds of police brutality.

Alternatively, cut to several months later as the city reacts with disgust to the perp’s lenient sentence, gained as part of a desperate plea bargain.

The Detail is a student of Telltale’s approach to player choice. Player reactions to different set-piece situations will affect how the ‘big picture’ story plays out, but (so far) does little to change the overarching plot. Reggie’s interrogation policy will leave him jaded and bitter, no matter what it happens to be.

There’s another example of this in the prologue, where the rookie cop involved in the capture of the suspect will either need to be saved by her more experienced partner, or able to fight off the assault. Either way the guy ends up caught, but you witness a slightly different story with a different lingering impact on the characters involved. 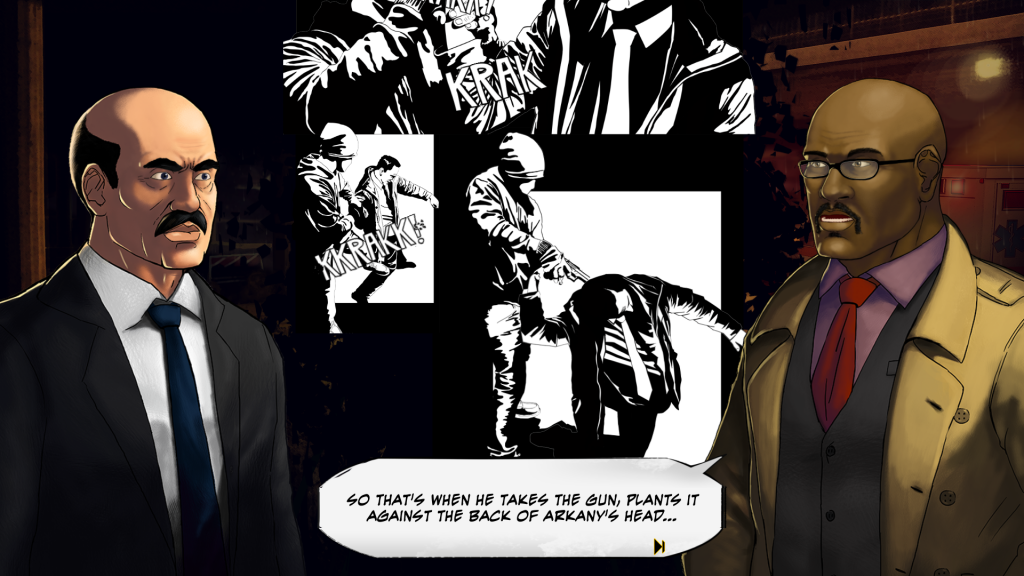 Or maybe he just slipped over and landed on the trigger with the gun next to his head … What? It could happen.

In-keeping with that Telltale influence, The Detail is episodic (Where The Dead Lie is part one of five) and pretty much lacking in traditional adventure game puzzles. It does make a concerted effort to make you feel as if Reggie is performing a police investigation; forcing the player to look for things like gunpowder residue, or a basis for searching a residence. But piecing together bits of evidence is a linear affair. Each scene has a limited number of points of interest, and simply finding them (either the old fashioned way or by toggling hotspots) is generally the key to progression.

This lack of any particular sticking points and the episodic nature of the game mean it’s a short outing. This first episode took me a little under an hour and a half to get through, and though there’s scope for replaying to see how certain scenes alter, the lack of multiple save slots means you have to annoyingly forego your original ‘run’ if you wish to do so.

The Detail also appears to be working within pretty tight budgetary restrictions, resulting in some varying quality in presentation. Much of the art design is fine, with the black and white comic panel style of the prologue and certain stand-alone scenes being particularly effective. The close-up character models, though, can sometimes be unconvincing, running a little too close to dodgy Homicide: Life on the Street fan art. 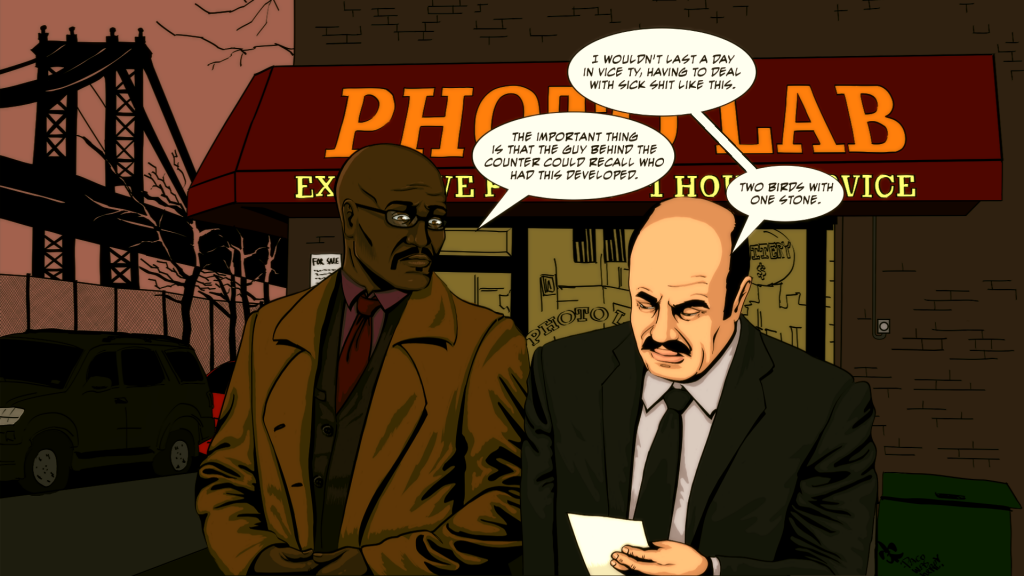 They’re not always perfect, but the graphic novel panels tend to be well composed.

At other points, the constraints of money actually act as more of a virtue. It means developers Rival have needed to get clever with their limited ambient music, at times doubling it up as a sound effect or tension sting at crucial moments. Sadly, there are other segments where an absence of ambient sound is felt quite hard; such as a lack of a gunshot, or silent rain.

A lack of voice acting also speaks to the frugal use of funds, but this feels like the correct choice. I’ve played far more games ruined by cheap or inexperienced voice acting than ones let down by passing the responsibility for voices to the player’s own internal monologue.

More importantly, The Detail’s words are largely strong ones. While there is a slight tendency to play to familiar police drama characters (the out of touch commissioner more concerned about his political image, the over-eager reporters and so on,) these are genre narrative touchstones for a reason. Reggie is a terrific character, worn down by his time inside a dysfunctional, imperfect justice system; jaded and liable to spit cynical commentary at every point of interest you maneuver him towards. 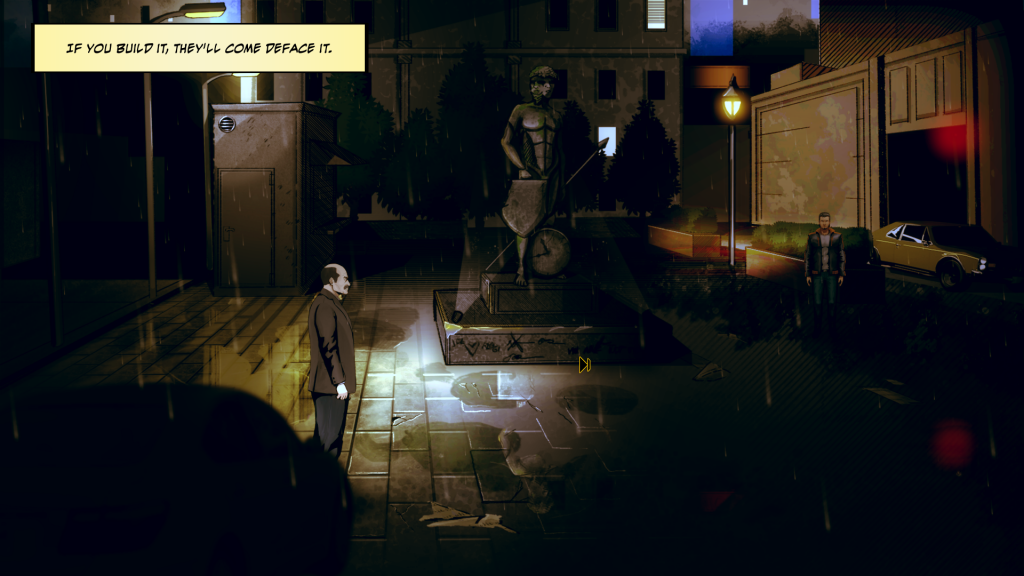 Where The Dead Lie also sets up a secondary protagonist in the form of Joe. A former gang member, and former informant, who’s pushed out of his straight-and-steady family life by a police force who view him as a means to an end. Playing Reggie as an unrepentant arsehole is no bother, but Joe has to watch his step if he’s going to make it home to improvise lousy stories about wizards for his daughter. Even if somewhat illusory, it adds a healthy amount of tension and second-guessing to your dialogue choices when in the presence of dangerous men.

The Detail is one of the rare videogame titles with enough nuance to delve into heavy themes like underage prostitution, without feeling overtly gratuitous or crass. The game’s subtlety doesn’t put it above tableaux depictions of drug gang shoot outs and rather typical Russian mobsters, but it does enable it to get away with topics that could (and, frankly, would) be badly blundered in other hands. 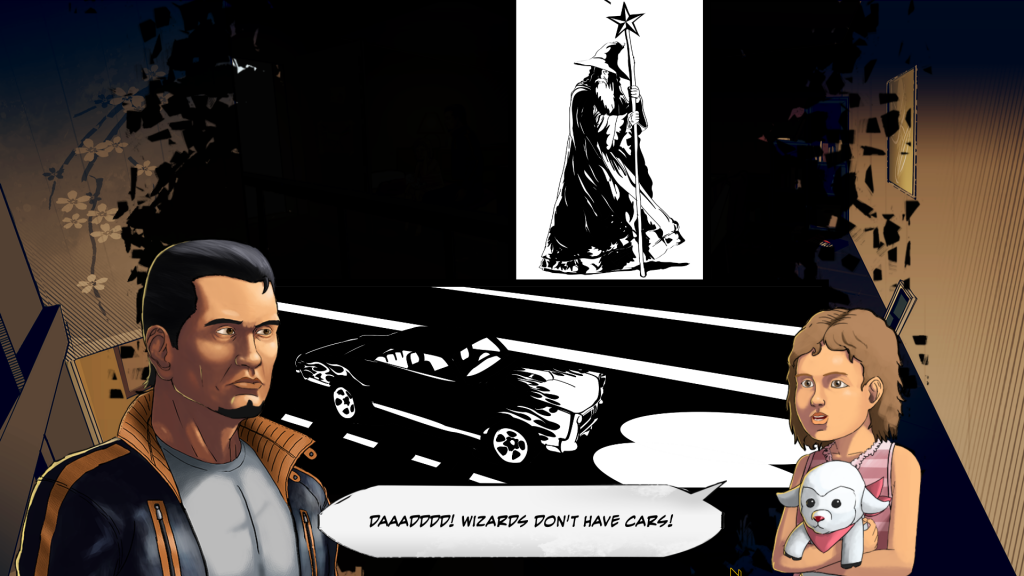 I wasn’t lying about the wizard stories.

As ever with episodic titles, a confident and competent start could quickly unravel over four more installments, but The Detail seems as if it has the writing chops to sustain a decent, character-driven narrative. The Telltale influence is pervasive, right down to the round-up of key choices at the end of the episode, so don’t come to this looking for extensive gameplay mechanics or taxing puzzles Instead, come for the lonely and dehumanising process of murder investigation in the shoes of a pissed off homage to Detective Sipowicz.