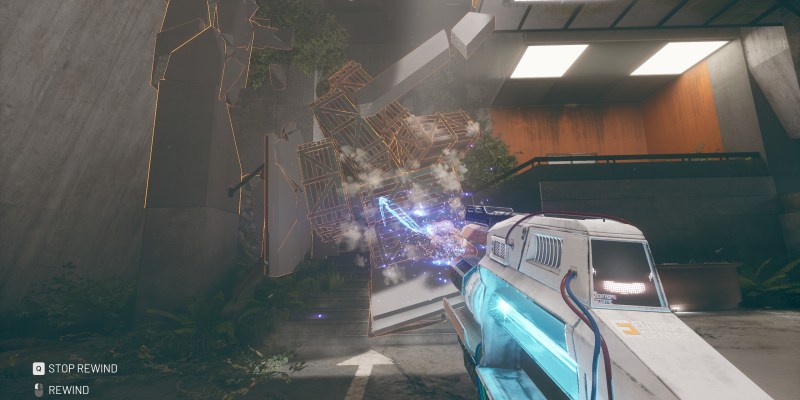 Astounding things can be born from familiarity. As anyone who’s played Portal knows, few puzzle games do it better. The Entropy Centre can appear like a straightforward Portal mimic, and it leans into that expectation. It’s got the hallmarks. Going through clearly labeled puzzle areas with a special gun and an AI cracking wise are present and accounted for. But the game does so much more, using wonderfully tuned puzzles, a compelling premise, and excellent writing to lift itself above its peers as it attempts to reach the shoulders of its inspiration.

The Entropy Centre begins with Aria Adams waking up in her room. She’s an employee of the titular organization but doesn’t recall what she’s doing or what’s happening. Early on, she acquires a special gun that will allow her to get past the game’s many puzzle chambers. The gun has an AI called Astra that somehow manages to be charming and adorable despite her face being little more than a text emote. The gun itself has the ability to rewind an object or group of objects 38 seconds prior to the state it’s currently in, which is the central conceit of the puzzles.

I’d love to do a deep dive of the game’s narrative and thematic elements, as everything is so imaginative and ripe for discussion. However, The Entropy Centre is absolutely best experienced blank. I’ll say a bit more, but I do advise you to skip the rest of this paragraph if you want to go in without the finer details. The Centre itself exists to avert calamities posing an existential threat to Earth. At first, it was just the bees, but the entire planet sees itself destroyed and it’s up to Aria and Astra to generate energy to rewind time for the planet and give it a chance to avert its demise. It’s a fantastic hook and the narrative is well paced. 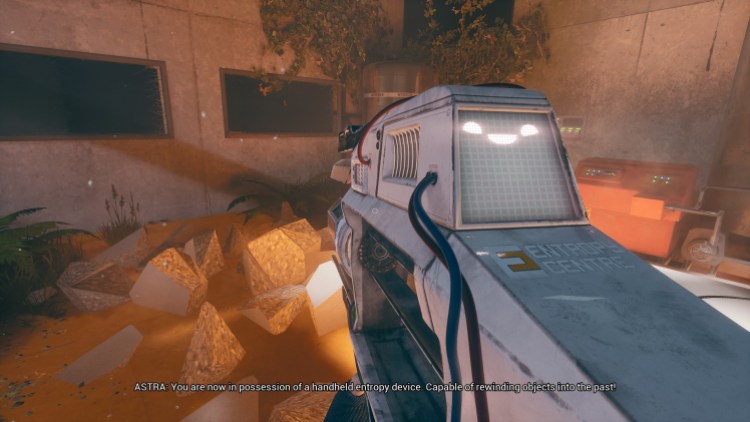 Gonna go back in time

The Portal puzzle design is very much in effect in The Entropy Centre. Your goal is to open the exit door and make your way to the next puzzle chamber. You typically need to use a puzzle cube to hold down a switch to make it through this door. What really differentiates the game, however, is its time mechanic. While you just need to put a cube on a switch to open the way, you typically can’t get there by traveling a straight line.

To describe it with the complexity of the most simple of the game’s puzzles, you’ll place a cube on the switch and then move it to wherever else it’s needed. Then you rewind the cube’s time so that it moves to the switch and lets you walk through the door. You’ll frequently need to work backwards for puzzle solutions, which means moving the cube through the needed series of events and then rewinding it to let you accomplish your tasks. You’ll turn on jump pads, activate laser panels, create walkways, and more. And you often need to rewind multiple cubes to move them into the right places.

There are multiple types of cubes in The Entropy Centre. The most basic is the default cube, which does nothing special. But then there’s a cube that creates a bridge of light, one that shoots a laser, another that functions as a jump pad, and a collapsable cube. Towards the latter part of the game, you’ll also contend with fields that transform a cube into any of the above, based on need. This leads to some fairly complicated puzzles that require you to rewind cubes back and forth through fields. It’s wild. 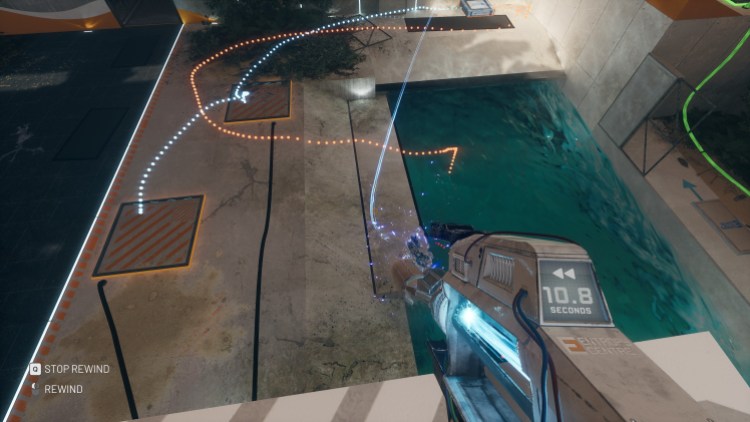 Designing good puzzles is obviously about more than functionality and ingenuity. Some games have those two things in spades but fall behind in regards to clarity and conveying information. The Entropy Centre‘s puzzle designs are crystal clear. Even complex puzzles can be solved rather quickly due to how neatly information is conveyed. There are no tricks, no “how was I supposed to know that” moments. I can get stumped almost laughably easily, but that only happened to me once in this game. And it was solely because I wasn’t making proper use of the tools laid out in front of me.

The game’s final puzzle was the only truly tricky one, as it requires a solution that no other puzzle before had even hinted at. I would have liked to see this built up more, as I could definitely see some people not being able to figure it out on their own. Conversely, diehard puzzlers will probably find that many of the puzzles are easy, but for a game with as much of a narrative focus as this has, I think that’s fine. Even the comparatively simple puzzles are great fun to figure out due to how intuitive the mechanics are.

But you’re not only solving puzzles in The Entropy Centre. There are plenty of sequences outside of puzzle chambers where Aria will have to use the gun to progress forward. The Centre’s robots are often hostile due to their programming, and you’ll sometimes need to navigate or solve some puzzles while they shoot balls of energy at you. You can use clever means to destroy some of the machines. However, there are also melee bots which you need to avoid completely. The game does a fantastic job of blending these sections with the puzzle chambers, which keeps things from growing repetitive. 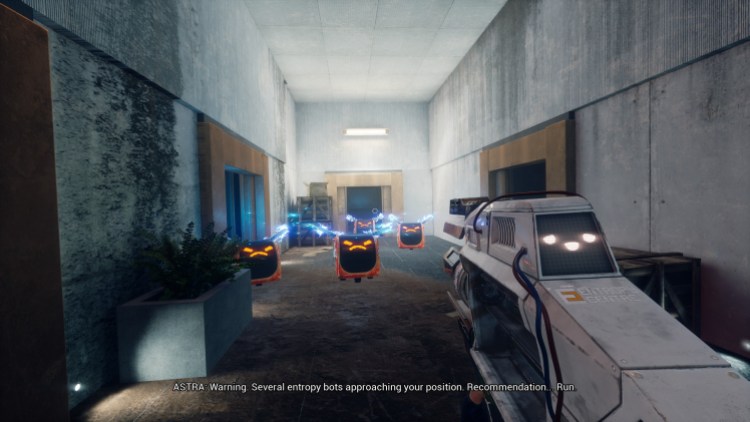 There are a few frustrations, though. Those robots I just mentioned can make certain sections rather vexing. You get warped back to checkpoints whenever Aria falls in water. And some of said checkpoints can be pretty far back. The game also has a single autosave, which means that you’ll be in trouble if you get soft-locked somehow. But it’s incredible that this game was put together by a single person. They did an amazing job, especially considering how good the presentation is. The game runs wonderfully too.

You’ll find a great many computers with emails on them that fill in extra detail, but many of these are hidden or require an additional puzzle to solve. The Entropy Centre might take players about a dozen hours to complete, as there are 15 chapters, each with four or five puzzles to get through. Some of the earliest chapters can actually be completed in 15 minutes.

In the end, I really loved my time with the game and the ending felt right to me as well. The Entropy Centre is not only easily the best puzzle game of 2022, but it’s one of the best I’ve played period. 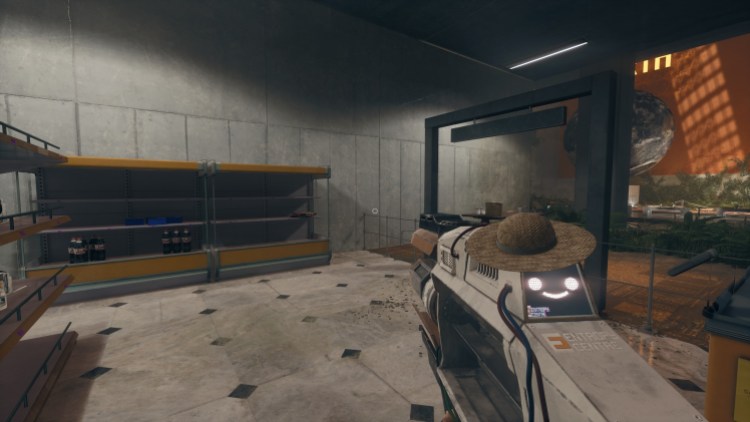 The Entropy Centre is far and away one of the best first-person puzzlers you can play. If the genre does anything for you, you should come away satisfied with what the game has in store.

The Steam release of Dwarf Fortress will arrive next month

How to build the best Modern Warfare 2 Lachmann-556 class