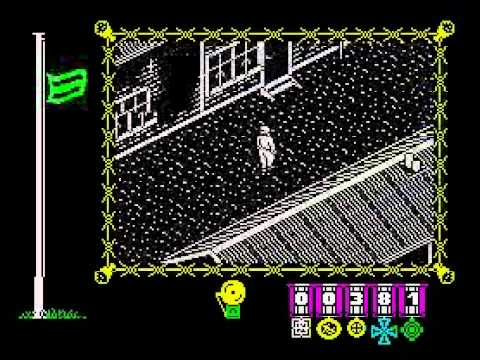 I’m rubbish at escaping from prisons. If I’d been in The Shawshank Redemption, that film would’ve just been ten minutes of me fumbling to hide contraband during a cell search, followed by a two hour solitary confinement montage. And then maybe Morgan Freeman saying something wise and profound just before the credits.

The Escapists, detained at Her Majesty’s pleasure in Early Access until 13 February, is a top-down-ish, 16-bit-styled test of a player’s escapology skills. I’m quite bad at it, but have definitely enjoyed my bumbling attempts to tunnel, climb and cut towards freedom. 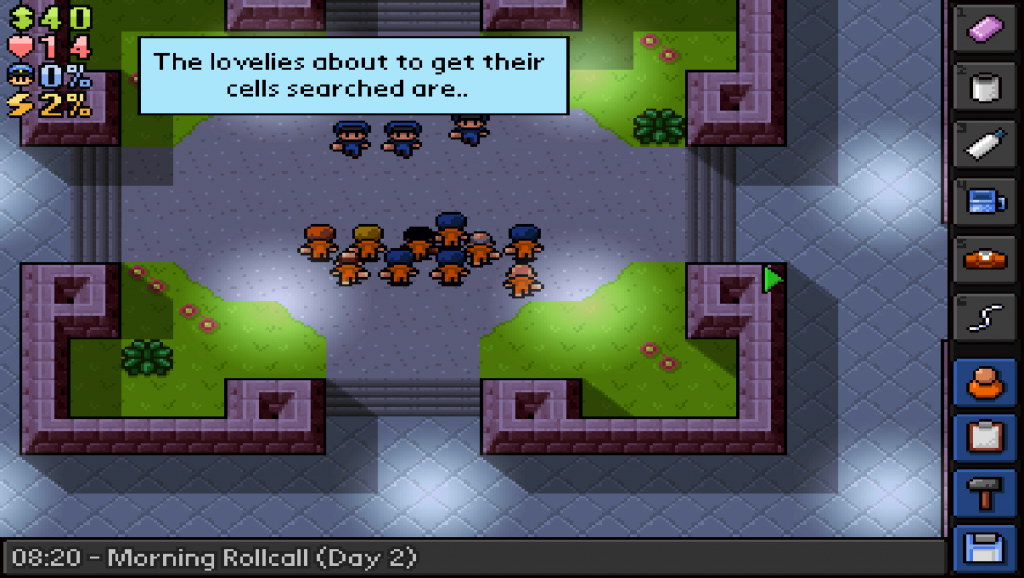 Fellow players of a pensionable videogame age (ie; over 30) may recognise echoes of a pair of old ZX Spectrum games in The Escapists’ prison routines and cunning plotting. You’re at the mercy of a schedule, expected to show up for rollcalls, lunches and planned exercise periods. This means any devious plans you wish to carry out have to either be done pretty sharpish (before anybody knows you’re missing,) during a free period, or after dark (but only if you can keep your activities secret.)

Anybody who played the Skool Daze / Bak 2 Skool series (which forced a similar routine upon players, but in a school setting) should find the need to juggle goals with the demands of a set timetable somewhat familiar. The Escapists even shares that series’ option to rename all the inmates (pupils) and guards (teachers) before starting a level. There also seem to be a few nods, intentional or not, to the isometric POW camp break-out title, The Great Escape.

It’s an interesting and unusual structure for a medium which tends to opt either for linearity with a distinct forward momentum, or an ‘open’ area where the player is the only actor not following a set routine. The Escapists mixes the two. You have a limited amount of freedom within certain designated prison areas, and can technically work towards your escape at any time (it’s just much more likely to fail during active, daylight hours,) but are also expected to follow a looping, linear schedule. 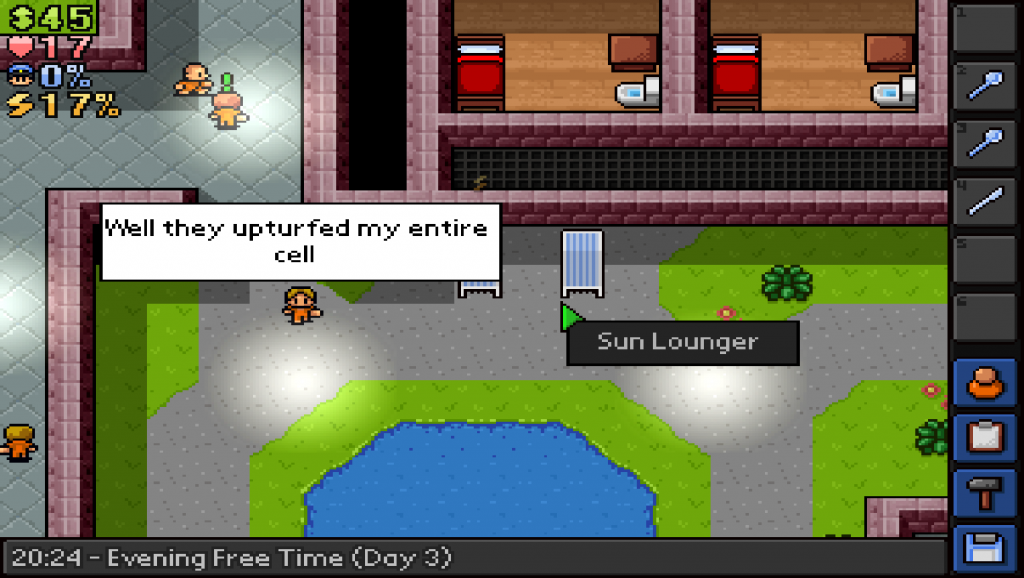 It’s fair to say that the first prison is pretty low security.

To aid in your daring escape plans, there’s a crafting system in the style of early Minecraft. It seems unbelievable now, but there was a time when nobody was quite sure how to craft some of the Minecraft objects. The Escapists is employing a similarly oblique approach, hoping players will figure out the more logical items (comb plus razor blade equals a dangerous comb-blade,) find rare-ish crafting notes, and put together cheat-sheet community wikis for the confused or impatient.

Individual components of more important objects (like cutting devices to get through fences, or a screwdriver to get you up into a vent) can be found in fellow prisoner’s cells, on their person (if you, or someone else beats them up,) on guards (likewise,) or can be purchased from willing contraband vendors.

Crafted weapons will give you a greater chance of holding your own in a fight with an inmate or guard, and money can either be earned through prison labour or doing favours for others (providing certain items, distracting the guards during lunch, and so on.) Prison jobs can also be a sneaky shortcut to useful objects. In the first, easiest prison, the laundry service job is the perfect way to get hold of a freebie guard uniform; extremely useful for wearing outside of your cell after hours. It’s even possible to engineer prison job vacancies by disrupting the inmate holding the position, then take the post for yourself. 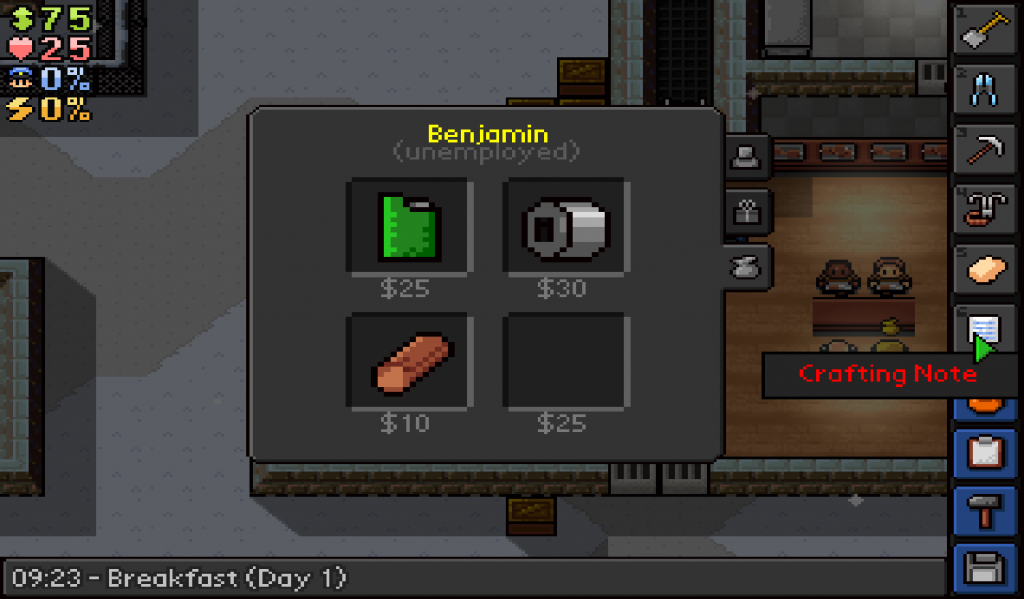 Doing a spot of shopping.

To do that, you’ll need a high enough intellect. The Escapists has three main player stats: strength, speed and intellect, all of which can be boosted at either the prison gym or library. Strength and speed are pretty self-explanatory, while intellect determines the type of objects you’re able to craft and the jobs you can hold. Stats have to be maintained to some degree as well, because they degrade over time if you don’t put the effort in with the weights.

But scraping together enough items to create a nice little escape-stash is only half the game. Since you’re in prison, it’s vital to conceal what you’re getting up to. Keeping everything in your prison desk risks discovery (and confiscation) in a daily, random cell search. Digging holes, chipping through walls and other obvious signs of trying to leave will get you a spell in solitary confinement. You need to be smart about keeping your items, and your actions, hidden from view with things like handy posters or fake, papier maché vent covers.

Strangely enough, there’s been more of an emphasis on concealing escape items than crafting them since a recent patch to the press build I’ve been playing. Pre-patch, players started in prison with nothing (which made sense, really.) In the present build, the easier prison levels start you off with a collection of sturdy tools and a grappling hook. It also boosted the amount of starting cash and baseline stats. I went from incrementally working my way out of the “very easy” starting prison over the course of a couple of hours, to being able to waltz out in two in-game days. 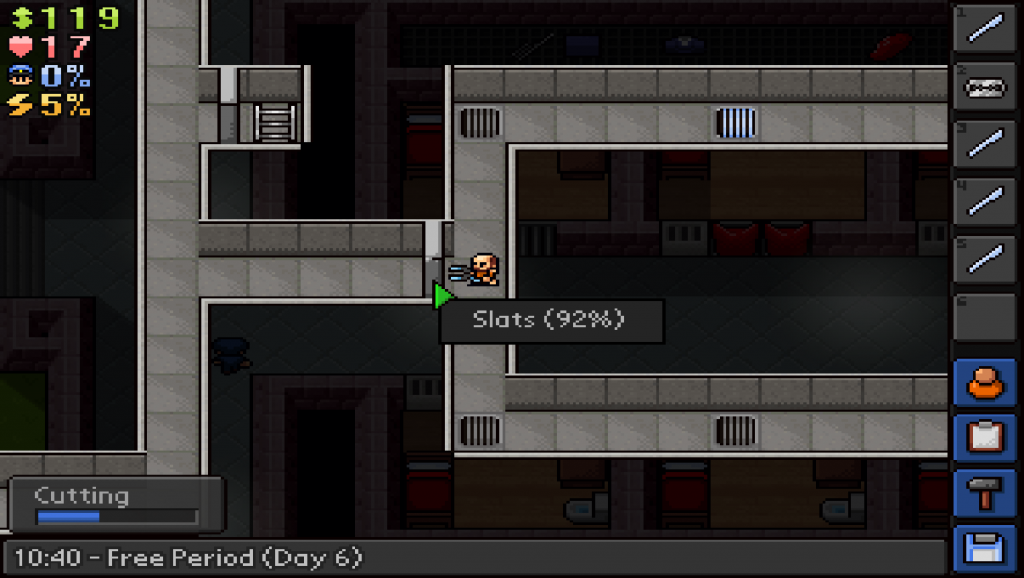 Just another 52 plastic knives away from freedom.

For now, that’s pushed the difficulty balance too far in the wrong direction. The pre-patch learning curve was steep, but it forced me to properly engage with the crafting, inmate shop/favours and job systems. Sneaking handfuls of forks from the prison cafeteria and using them to chip ever-so-slowly through my cell wall felt a lot more rewarding than starting off with a pick-axe and hacking it to rubble in seconds. The latter route bypasses some of the more interesting systems in the game.

I’m assuming The Escapists is still playing around with balance before February’s release, so I’m not too worried yet. The earlier version I messed around with did seem pretty hard for a prison labelled as “very easy,” but did provide a fairly forgiving environment for experimentation.

Giving players powerful escape tools right away doesn’t seem to be the right answer. Starting people off with a couple of useful crafting recipes, or the ability to learn crafting methods from other prisoners as part of the favours system might work better, but I’m not in a position to judge how that would affect other design decisions. 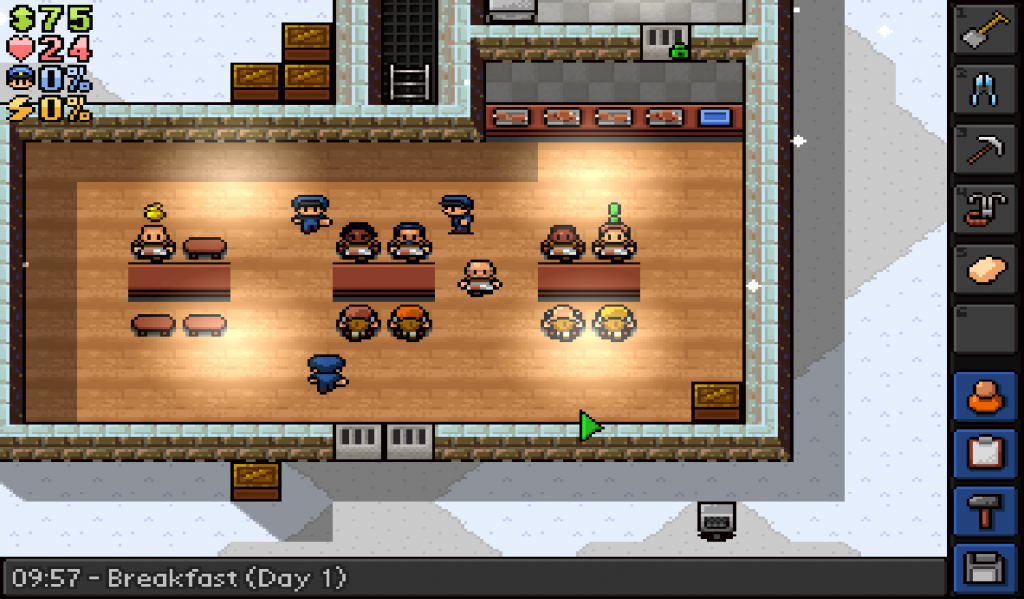 Maybe I can use this tray to freestyle luge my way out.

The Escapists is a game that’s already lending itself to a system of community-shared hints and tips, so it should survive a rough learning curve. Steam already has a number of crafting guides for those who wish to seek them out. Some of the prison escape guides have fallen a little out of date, but will no doubt be altered or replaced in due course.

Even more encouraging for the game’s longevity is a promised custom map editor (not yet released) which will allow players to design their own fiendish prison complexes. This too should help provide a broad spread of difficulty, and extended the escapades beyond the current set of six official prisons.

The Escapists’ sandbox is restrictive by design, putting an interesting and novel emphasis on planning your operations around an enforced schedule. Where most games of this open (or semi-open) nature go out of their way to make the player powerful, here you’re somewhat at the mercy of the system. As a result, it feels tense and devious to be subverting and working against this same system from within. With a release date three weeks or so away The Escapists feels close to structurally complete, with a great deal of scope for expansion (new crafting items, ways to interact with the environment, player-created prisons and so on.) Enough to keep people captivated, you might say.

By Jason Rodriguez8 hours ago
Previews