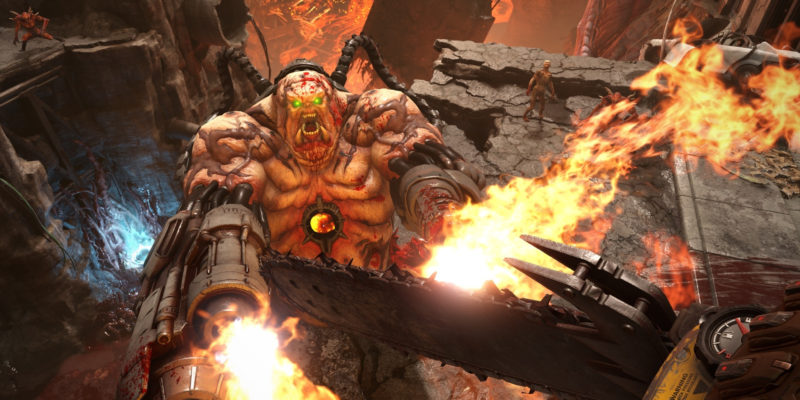 Brace yourself for yet another descent into hell, as the first 10 minutes of Doom Eternal have been released to the public, and the new game is every bit as gorgeously violent as should be expected from the series.

Yet again, the bloodthirsty Doomguy is shooting his way through a series of terrifying monsters. The new footage was captured at full 4K resolution at 60 FPS, showing just how good this game is going to look on a decently powerful PC.

Technically, the first two minutes of this footage is the game’s opening cutscene, which, while impressive, hardly shows off the game in action. Thankfully, as with DOOM 2016, context and story is kept to a minimum within this cutscene so that the player can start blasting skeletons as quickly as possible.

While the action starts in the same claustrophobic corridors that made the previous DOOM games feel so energetic, this new footage also shows off a wide open war zone, with large areas that can be explored vertically to discover their various secrets.

Releasing on March 20, Doom Eternal is also coming to home consoles, including, rather impressively, Nintendo Switch at a later date, but it’s clear from this new footage that a platform like PC with a lot of horsepower will do this game the most justice.

Developer id Software continues to say all the right things about Doom Eternal, promising around 20 hours of demon-stomping and guaranteeing that the experience won’t be sullied by any kind of microtransactions or digital storefront.

For those who prefer the retro charm of the original Doom and its sequel, these games recently received a patch that allows them to also run at 60 FPS, although in fairness, they do show their age when compared with the upcoming installment.

The 2016 Doom reboot did an excellent job of revitalizing an older franchise, giving it a new, exaggerated art style, and focusing gameplay on quick, instinctive movement, in contrast to modern cover-based shooters that encourage caution over recklessness.

It remains to be seen whether Doom Eternal will keep up the pace or whether it’ll end up feeling like simply more of the same, but regardless, this new footage from the game’s early levels proves that it’s going to be yet another viscerally beautiful experience.

By Matthew Loffhagen8 hours ago
News