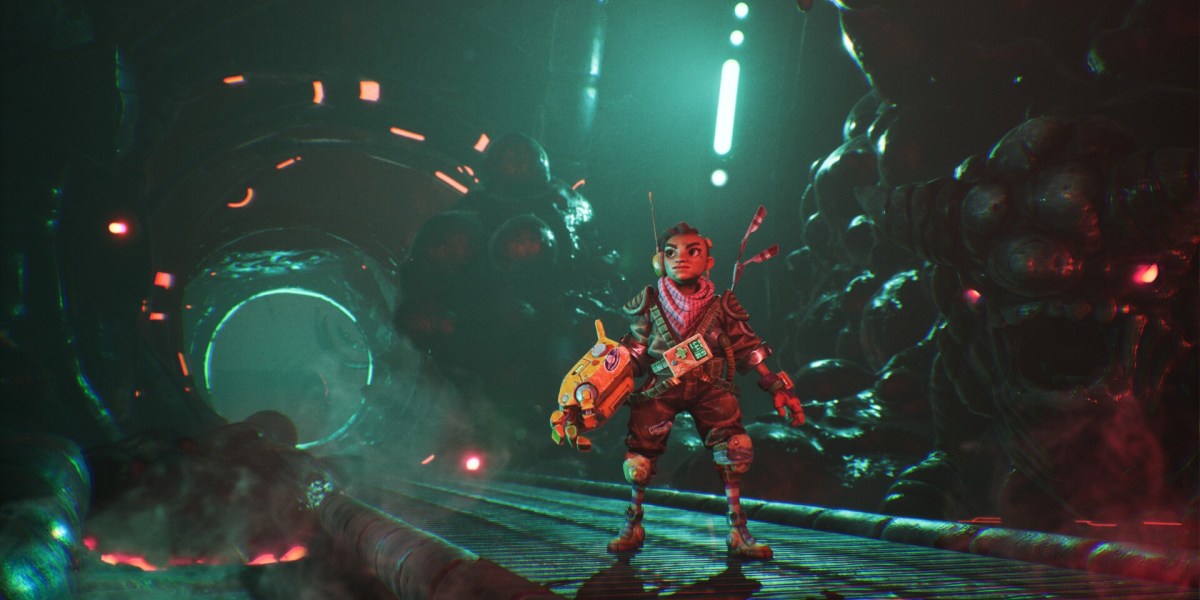 I love games about cleaning things up. Super Mario Sunshine has been a perennial favorite of mine, and Powerwash Simulator is something I keep going back to as of late. The Gunk does require players to clean up some of the titular goop, but, naturally, that’s not what the game is about overall. This is a rather short adventure game with lovely visuals and strong world design that I enjoyed for the duration of its runtime. I wish there was more of it and, hell, I also wish there had been more gunk to clean up. But this is still a solid first 3D outing from the Steamworld devs.

The Gunk tells the story of Rani and her partner Becks. The two are scavengers that go to planets in their ship looking for things to haul back for a tidy profit. They set down on one such planet and give it a look, only to find that the place holds some financial promise for them. But the titular gunk is found all over, and Rani has to explore on her own. Before long, she finds a seemingly-abandoned civilization and a still-present threat that’s sucking the planet dry.

The game has some pretty strong environmental themes. You probably remember Mako from Final Fantasy VII, the lifeblood of that game’s planet that was being drained by the evil Shinra Corporation. Here, the energy is called Geist and the gunk is a byproduct of harvesting it. Much like Okami and other environmentally-focused games, the world appears cracked and dingy, and taking care of business will see you restore it to its former glory little by little. Still, The Gunk doesn’t have much to say in regard to the evils of destroying a planet for its natural resources, but that’s also par for the course for most similar games. 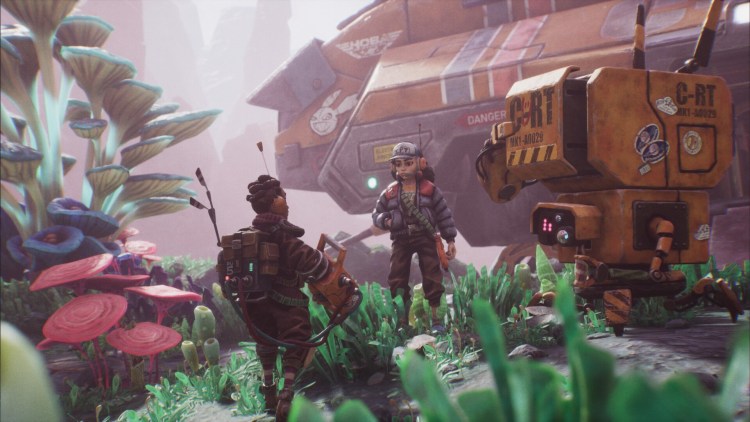 The Gunk is a linear game that most will complete in around four or five hours. Rani’s main gimmick is that she has a glove that acts as a vacuum, which cleans gunk from the environment. The gunk itself is effectively-rendered, and it kind of looks like writhing, diseased jello. It moves around on its own, and sucking it up is honestly pretty satisfying. Usually, you’ll go into an area that’s had the color drained from it, and you have to suck up all the gunk to bring life back. Once it’s all gone, there’s a green pop and plants return.

There are a few enemies to go up against. The most common are little creatures created by the gunk. Rani just sucks them in and throws them. She can also throw them at one another. Then there are enemies akin to turrets that she merely needs to approach, turn on the suction, and then rip them off. You need to dispose of the enemies as well as the gunk to clean an area. Once you do, you progress down a linear path, often accompanied by some well-written and endearingly-voiced dialogue. Rani is likable, but much of the game’s drama stems from Becks taking issue with her world-saving crusade. It just makes Becks herself come across as kind of awful, even if the game explains this to a reasonable degree.

The game’s areas are interconnected, and there are a half dozen spots that Rani can place a beacon to travel to and from her and Becks’ base camp. You can backtrack if you so wish, but there’s not much reason to do so. There is room for exploration, however, as you’ll find resources all over that you can use to build upgrades. Much of this exploration is purely optional, but I went out of my way to do as much of it as I could. 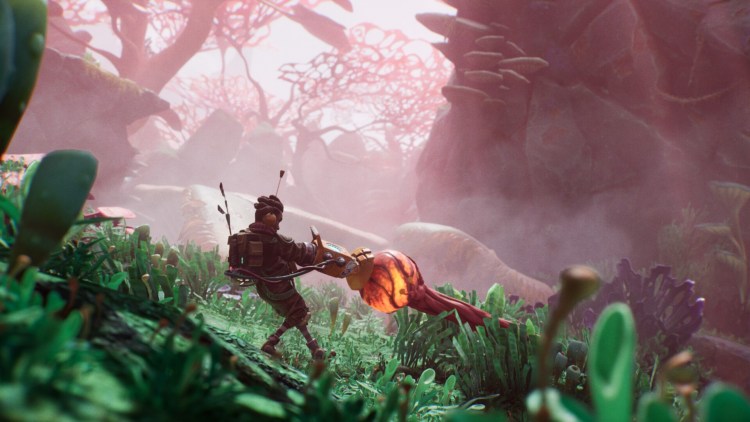 How much is enough?

You unlock upgrades in The Gunk via scanning enemies, resource nodes, and other objects of interest. For every four things you scan, you unlock a new upgrade. The game is mostly quite easy, so these upgrades are far from necessary, but I still bought most of them. They range from granting new abilities, such as a lure for foes, or glove upgrades that increase how quickly you vacuum gunk. One upgrade basically gives you an extra life, not that you’ll find yourself dying.

Some of the time, you’ll need to find multiple switches in the interconnected areas to open the path forward. It’s almost always clear where to go and what you’re doing. There’s some platforming in the game, and Rani’s glove can shoot a blast that stuns enemies. It can also knock down seeds and bombs, which you’ll found throughout the world, as well as open the occasional door. Seeds need to be placed in green pools to grow mushrooms that you jump on, while bombs can be thrown onto surfaces to clear the way. All of this leads to a satisfactory game loop that continually pushes you forward.

The only real problem I have with The Gunk is that it’s lighter on content than I expected. As I said, four or five hours and you’ve finished the game with nothing left to do. Granted, The Gunk is well paced and doesn’t wear out its welcome. It’s got the right amount of mechanics and different elements, making for a balanced adventure. But I was expecting something meatier from Image & Form Games, as this game is about as quick as the first Steamworld Dig, but the dev’s subsequent games were notably longer. I also noticed the occasional issue with collision detection. On occasion, Rani would wind up stuck, twitching in the environment for a few seconds. 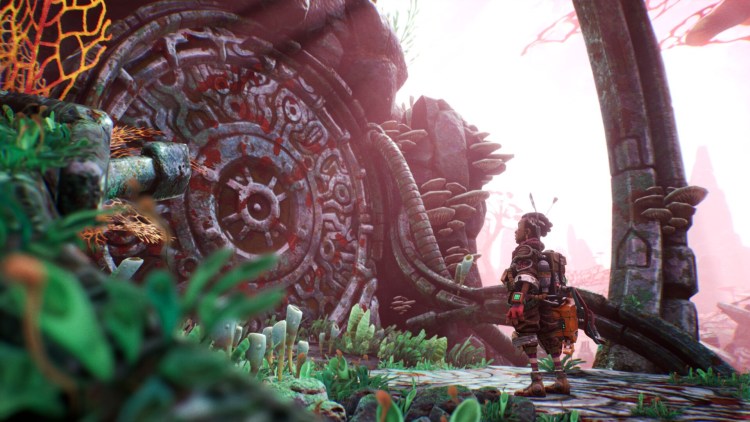 The Gunk is worth playing, though. I enjoyed my time with it, even if the overall experience feels a bit slight. It’s lovely, has solid characters and dialogue, and it’s mostly just fun to play, which is always the end goal. I do wish there were sections where I had to just mindlessly clean up a ton of gunk, though. That would have been a neat extra mode. Maybe if they had a big area packed with gunk and hazards and you had to clean everything up in a certain time to get a medal. I’d play the hell out of that.

Enjoyable, but rather slight, The Gunk is an intriguing journey through an alien planet while vacuuming up goop. There isn't much to it, though, which I found a bit disheartening.

Final Fantasy VII Remake Intergrade review — Echoes of the Past