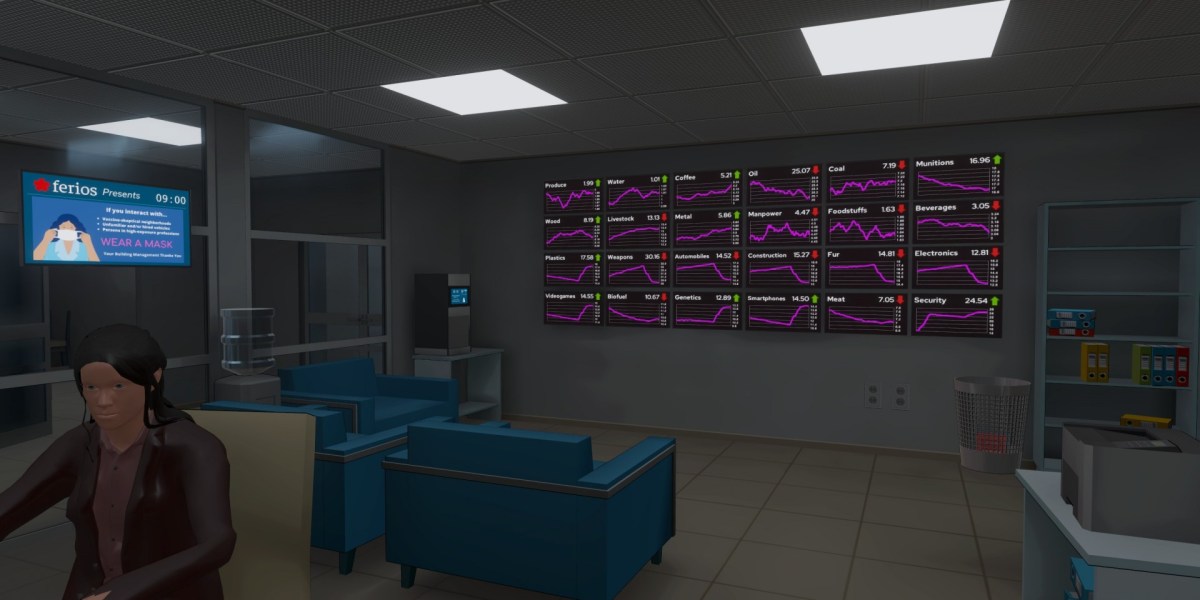 The lives of wealthy stockbrokers are ripe for satire. In a country where so much of the citizenry lives paycheck-to-paycheck, who wouldn’t gawk at people who make tons of money by making tons of money? The Invisible Hand has a lot to say about the existence of shady companies that make money by gaming the system, but it does so while also pretending to be a regular game. The thing is, it isn’t completely upfront about this, which leads to some issues as the plot develops. I honestly think I would have liked it more as a full-on game.

The Invisible Hand begins with your unnamed character being hired by Ferios, an elite financial company. You don’t have relevant experience, but your relative knows a guy that knows a guy. Before long, you’re neck-deep in company politics while you sink deeper into the ethics-free mire of big money. The plot itself mostly concerns a watchdog group keeping tabs on Ferios, while you yourself use illicit tools to get a leg up on the competition. One of these is Geistnet, a dark web resource that has the latest scoop on insider information.

The game makes a big show of giving you the illusion of choice. You can supposedly play however you want. If you want to try and do things by the book, you can do that. If you want to lobby foreign countries to influence the strength of their currency, hey, that’s on the table too. The issue is that none of this matters. The story is going to turn out the same either way. Plus, by the end, The Invisible Hand makes it clear that its game systems are smoke and mirrors. It’d be better if the story was funnier or more interesting than it is. It’s far from bad, but it wobbles uncertainly between narrative elements. 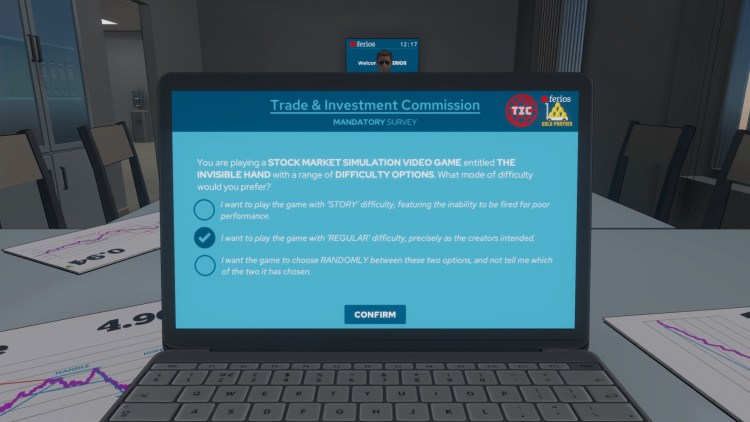 Buy me a river

As a stockbroker, the game itself appears to be all about buying and selling. Once you get set up, you start with a certain amount of cash that can be used to buy and sell stocks. The options are solid. You can buy stocks normally or short them. You can also collect dividends on long purchases. However, there’s no way to automatically buy or sell based on stock price, which is a bit weird considering that the feature is built into all real-life platforms. As such, you’ll need to carefully time everything.

You have a few tricks up your sleeve to accommodate this. The left side of the trading platform has a Twitter-esque feed containing stock tips. These are not always accurate. You can ascertain their validity by seeing how many likes each tip gets, but you run the risk of buying stocks for more when you wait longer. Then you’ve got the aforementioned Geistnet, which offers insider information on what’s going to happen to certain stocks. Maybe the price of oil is going to tank, or coffee is going to become scarcer, causing the stock value of a coffee chain to shoot through the roof.

Or you can use go out of your way to throw a wrench in the insider information. Using your ridiculous coffers, you can send lobbyists to affect prices directly. For instance, you can cause the value of a currency to temporarily plummet and reap the rewards. Of course, you can do this regardless of what Geistnet says. But doing this affects public opinion, which The Invisible Hand warns you will have consequences, as that will tip the watchdog off to your malfeasances. 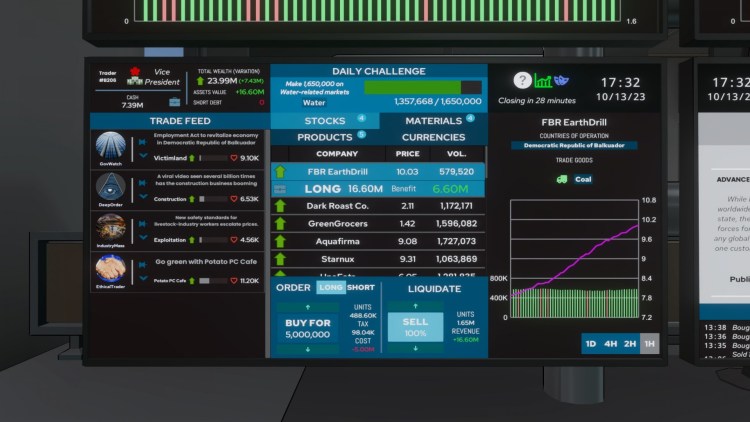 On top of those systems, you also get wealth sent to your personal account, which can be used to buy pieces of property and goods. You can then lease out your property to further increase your wealth. This is pointless and I didn’t bother with it much. The overall progression system in The Invisible Hand is ostensibly built around you directly competing with rival stockbrokers. Whoever hits the specified monetary target first gets to keep their job. You go through these one at a time, and they all have personalities and the like.

I think day-trading makes for an intense, entertaining experience, so I actually enjoyed the gameplay here, aside from the extreme randomness of the stock fluctuations. The Invisible Hand isn’t meant to be realistic, but I wish it didn’t feel like gibberish. Stock prices randomly spike and crash ridiculously within a matter of minutes, like some kind of madhouse version of the real thing. I played the game by almost exclusively utilizing the regular tips. It’s very easy to beat your rivals even without doing anything unseemly.

But it’s all irrelevant. Even if you play the game without breaking any rules or taking advantage of the state of a suffering country, you’re still get sent down a narrow path towards a binary choice that simply ignores everything you did. After you select that choice, the game keeps going, but you’ll see the credits playing on nearby monitors. While facing off against one of your rivals, the monetary amount required to win will increase by $5 million and you can never beat them. 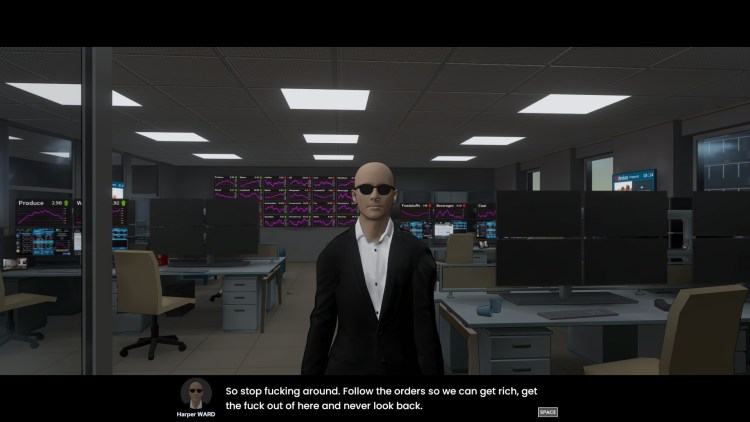 And that’s the problem with The Invisible Hand. It’s all smoke and mirrors. Nothing you do makes any difference. You don’t actually have to try, and any effort is meaningless as you’ll see the same events play out regardless. I appreciate the narrative intent here, but it’s mostly in the background for the majority of the game before it screams in your face that there never was any game. It’s surreal, but also disappointing. I felt like I wasted time and energy. The entire thing just feels haphazard and pointless.

It takes about three hours to see the credits, and you can keep playing if you want. But there’s no reason to, as all of the gameplay is just a thin veneer for the rigid plot elements. The Invisible Hand does have some laughs and the dialogue can be entertaining, but it just doesn’t quite do it as a narrative experience. Anyone trying to play it solely for the narrative will be bored by all the time it wastes, while anyone trying to play it for the gameplay will be annoyed by how pointless everything is.

Interesting and fun at times, The Invisible Hand pretends to be about gameplay, but it's all just an illusion.