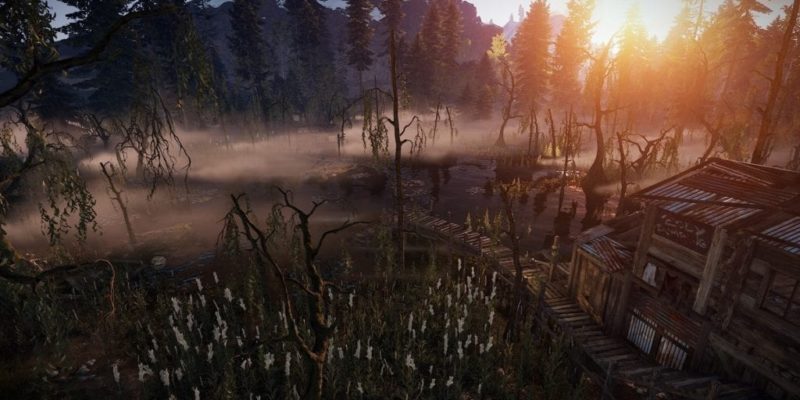 Rust is one hell of a chaotic game. The multiplayer survival tasks players with collecting resources to build bases, wage war against one another, and do whatever it takes to carve out a living on sprawling, randomly generated maps. Playing Rust is often unpredictable. Any player you encounter could become an immediate threat. And in the latest Rust update, it’s not just human-controlled enemies you have to worry about. The Bandit Town update adds a new monument — Rust‘s terms for static map locations — operated by less-than-trustworthy NPCs.

The Bandit Town update launched on August 2, and it brought some major changes with it. First and foremost is the new Swamp biome. Foggy swamps will now spawn on some maps. They’re full of standing water and dying trees. The biome is home to abandoned shacks with low-level loot drops as well as the titular Bandit Town. 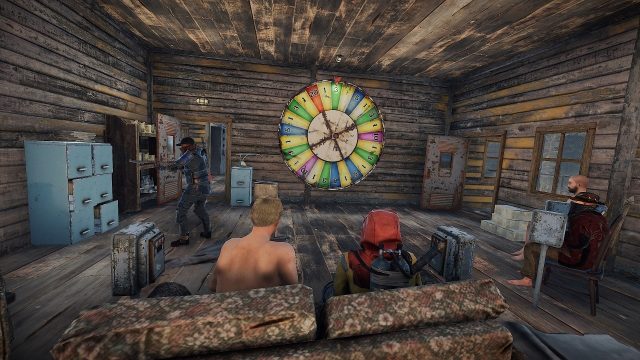 Expect to lose all your scrap gambling in Bandit Town.

According to developer Facepunch, the Bandit Town has several buildings and NPC-run shops. Bandits, despite their faction name, seem keen to play small-town capitalist. Players can buy weapons that are otherwise uncraftable from NPCs as part of the Bandit-run black market. Similarly, players can sell off specific items in exchange for scrap, Rust‘s key crafting ingredient.

In keeping with the freewheeling, lawless theme, Bandit Towns have a casino as well. The gambling den is a safe zone, meaning that players must stow their weapons before entering. Once inside, you’re free to gamble your hard-earned scrap by placing bets on a spinning wheel. It’s rather simple; pick a number, bet some scrap, and hope that the wheel of luck spins in your favor. If the wheel lands on a players’ number, they’ll earn back their scrap plus a multiplier based on the number they picked. With 1, 3, 5, 10, and 20 as betting options, the Bandit casino gives players a unique method of earning lots of scrap in a short amount of time.

Facepunch also indicates that the casino could be the start of other betting games. In the Rust update patch notes, the develop writes that “If people really like [the casino], and we get some time in the future, maybe we’ll add PvP games, like Poker.” It’d be great to play cards against other players, but Rust‘s community is notoriously trigger happy. Facepunch is aware of this, mentioning later that “[poker]would end up creating some real PvP afterward.” 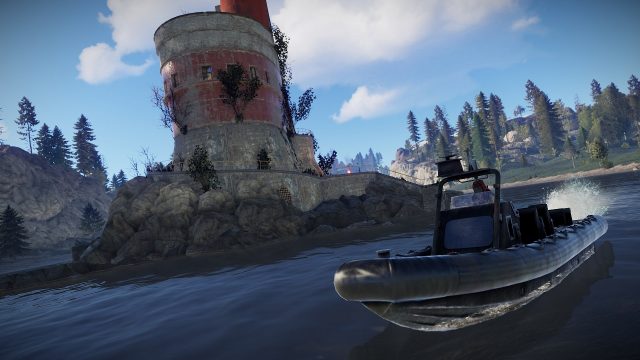 The RHIB might not be much to look at, but it’s a fast way to travel around Rust.

Speaking of PvP, the Rust update also adds a new weapon to the game. The Compound Bow is an alternative to Rust‘s basic wooden bow, offering a higher-velocity shot that can do twice as much damage. However, because the Compound Bow requires more time to draw back, players will lose their shot’s accumulated power if they move before firing. It’s a tradeoff, to be sure, but the Compound Bow’s increased damage output makes it sound worthwhile.

Other new features include the RHIB boat. The boats are relatively rare spawns — Facepunch mentions only six will spawn on a 4k server — and are worth fighting over. They’ll spawn offshore, near junk piles. Because the RHIB is the fastest way of traversing Rust‘s waterways, it’s safe to assume that they’ll become a hot commodity. And if you’re lucky enough to secure a RHIB, take some time to sail out to see and dive underwater. The Bandit Update introduces some improved underwater vegetation.

As expected from a game like Rust, the Bandit Town includes dozens of smaller tweaks and changes. If you’re interested in the game’s minutiae, scan through Facepunch’s official update announcement. If you need me, I’ll be exploring the swamp and losing all of my scrap gambling in Bandit Town.

Not Tonight Releases on August 17