Any time we’ve talked about Minecraft, there’s been at least one reference made to the game’s upcoming Caves and Cliffs update. Announced last year, this update will bring huge changes to the game’s blocky world with new mobs, blocks, and world generation. Players have even been able to preview those new features in Minecraft‘s snapshots. However, we won’t be getting the full release of the update any time soon. A video posted to the Minecraft YouTube channel revealed that the Caves and Cliffs update is being split into two parts.

According to the video, titled “A Caves & Cliffs Announcement,” there will now be two updates for Minecraft this year. The first will arrive this summer and focus on the blocks and mobs we’ve seen in snapshots. The second is coming this holiday season and will focus on the new world generation promised in the update. 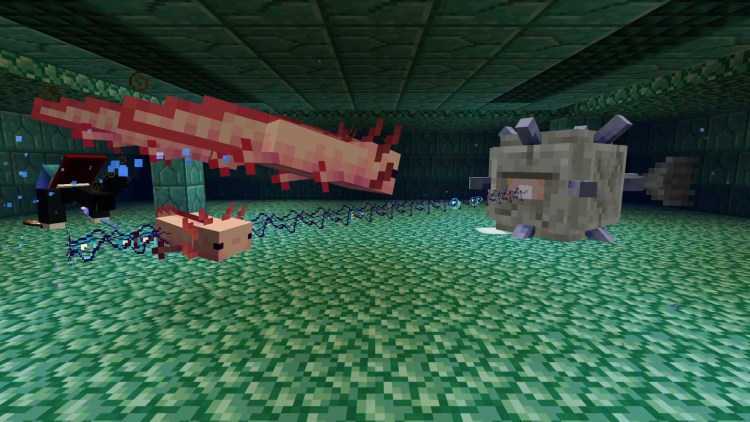 In terms of quality, Larsson states that “For us, the most important thing is to deliver as much player delight as possible.” That means releasing different features without bugs or glitches. Some mechanics apparently require more time to meet Mojang’s quality standards, resulting in delays. That ties directly into the technical challenges aspect of the split to the Caves and Cliffs update for Minecraft. According to Henrik Kniberg, Minecraft‘s vanilla gameplay designer, the Caves and Cliffs update presents a number of monumental changes. The game’s new world generation, from larger mountains to diverse caves, is technically difficult to implement. “This is tricky,” Kniberg said. “It touches the core of how the world is generated. It’s also tricky for performance reasons, because there’s just more going on when the world is higher.”

It shouldn’t be that hard to understand why team health is important to Mojang. According to Larsson, another reason for splitting up the Caves and Cliffs update for Minecraft was to prevent crunch. To get it all out at one time, developers would have been forced to work overtime, something nobody at Mojang wants.

What comes to Minecraft and when?

Like I said before, the Caves and Cliffs update for Minecraft is being split into two releases, one this summer and another during the holiday season. The update this summer adds the new blocks and mobs we’ve been introduced to over the past six months. Players can expect things like dripleaf, glowberries, deepslate, and axolotl to populate their world in this update.

The update this holiday season on the other hand will bring new world generation with it. This is when players will be able to explore new caves and mountains, and find that their worlds now stretch both higher into the sky and deeper underground.

Thankfully, you won’t have to start a new world to access the content in either of these updates. Larsson made a point of stating that Mojang didn’t want players to lose their old worlds to experience the changes coming in either of these updates. To that end, players will be able to keep their worlds through both the summer and holiday season Caves and Cliffs updates.

Fortnite DC Comics are coming later this month, and include codes for cosmetics

Final Fantasy XVI gets a release date and new trailer

Remnant II has been announced with a trailer