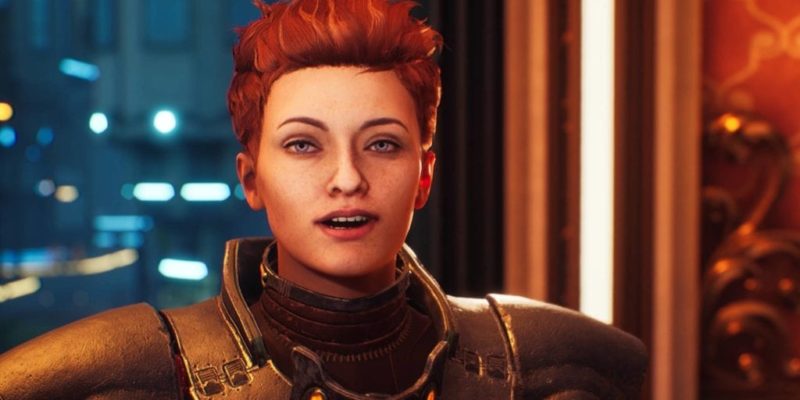 Praise be: The Outer Worlds is free of bugs (except the ones you shoot in the face). If you’ve already checked out the review you’ll know it’s pretty much a less sprawling Fallout game, and that should raise suspicions of it being more than a little bit broken. It’s not. Across my two playthroughs, it proved to be remarkably solid.

We can discuss that in detail a bit later, but considering “Fallout-inspired” and “Obsidian,” I figured it was probably best to get that out of the way as quickly as possible. But now, performance!

Those specs are remarkably low, and it also only needs 40GB-ish of hard drive space. I’m not sure I’d recommend playing The Outer Worlds on the bare minimum, but I can at least confirm that it’s not a hugely intensive game in most scenarios. Let’s have a look at the graphical options on offer, do some screenshot comparisons that have driven me insane, and talk about frame rates. That should give you a better idea of how your computer will handle it.

The Outer Worlds does not get high marks for its graphical options. Here’s your lot: 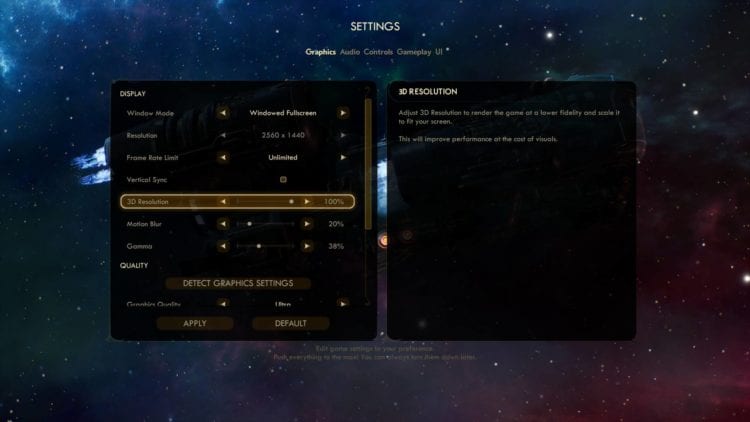 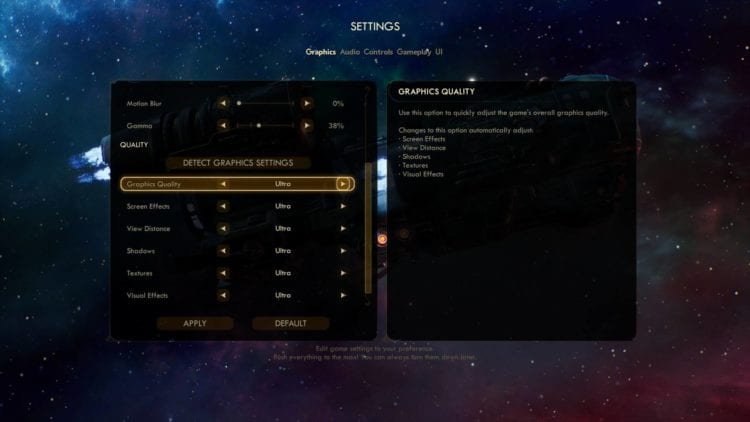 I do at least approve of the suggestion to put everything on max and then turn it down.

There’s also an FOV slider in another menu, so I’ll at least give it a point for that. I’m not impressed with how many of these options are lumped in together, though.

Screen Effects is one thing you absolutely, positively want to set to Low, because it smears the entire screen with vaseline. It’s responsible for horrors like chromatic aberration, lens flare, blurring things, and what appears to be a very minor form of vignetting. It may also be responsible for anti-aliasing, unfortunately. It’s incredibly hard to tell.

The others are mostly self-explanatory, with the exception of Visual Effects. That’s largely fancy stuff like lasers and explosions. The problem is that it’s hard to tell where things like anti-aliasing fit in.

Let’s have a look at some comparisons, and then we’ll talk about why I’ve been slowly going insane while writing this tech review. 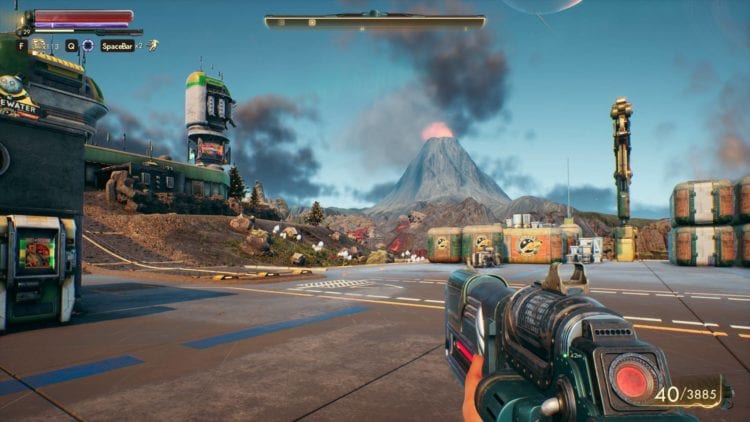 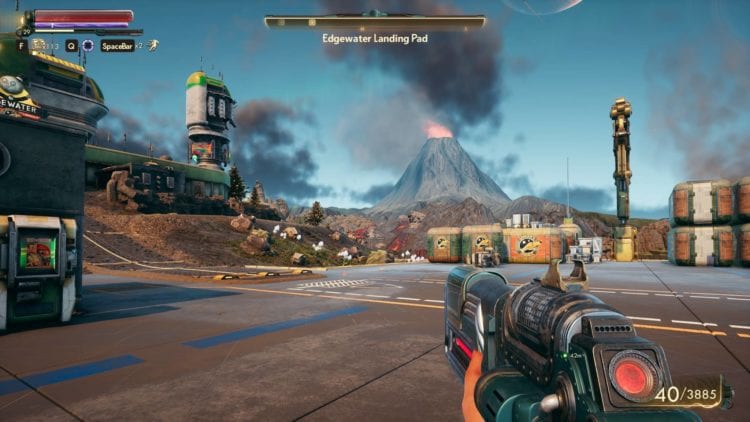 For a laugh, let’s also have a look at what happens if you turn the 3D Resolution down as far as you can. This effectively renders the game at a much lower resolution than your display resolution and then upscales it to fit your monitor. 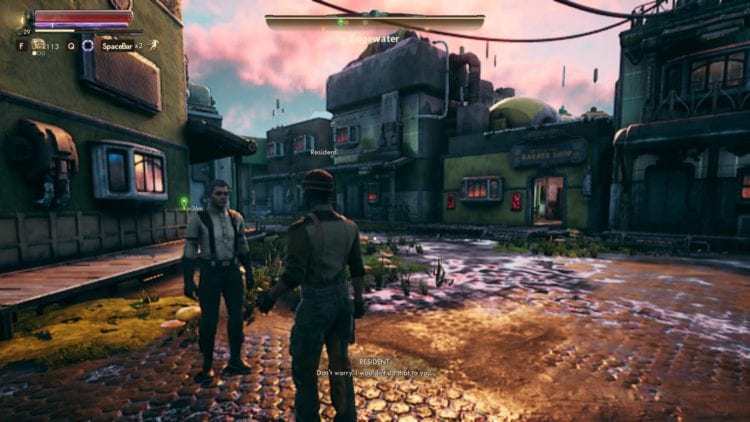 I now know what it’s like to have serious eye problems.

Yeah, don’t do that. Now! A few shots showing the difference between Ultra and Low. 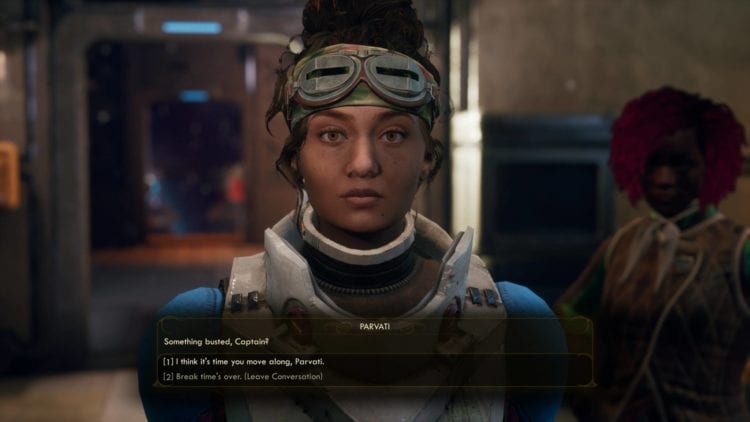 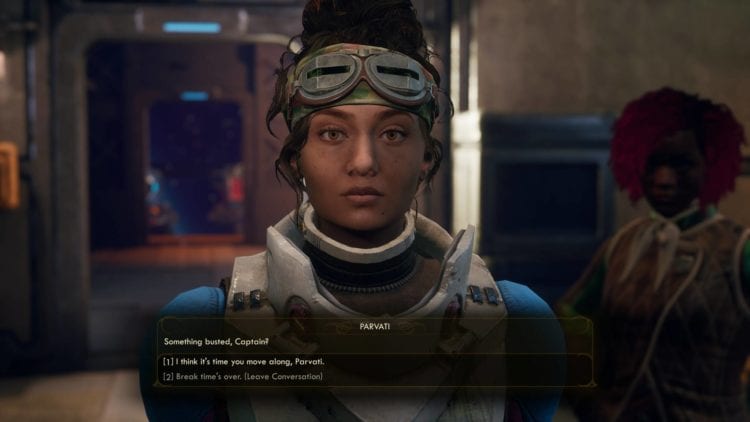 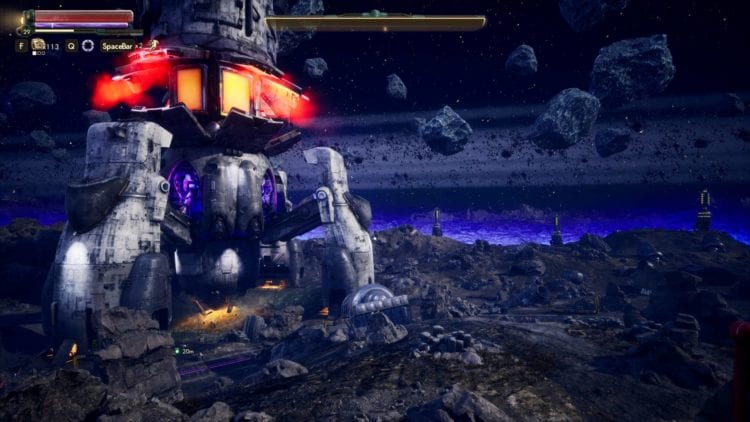 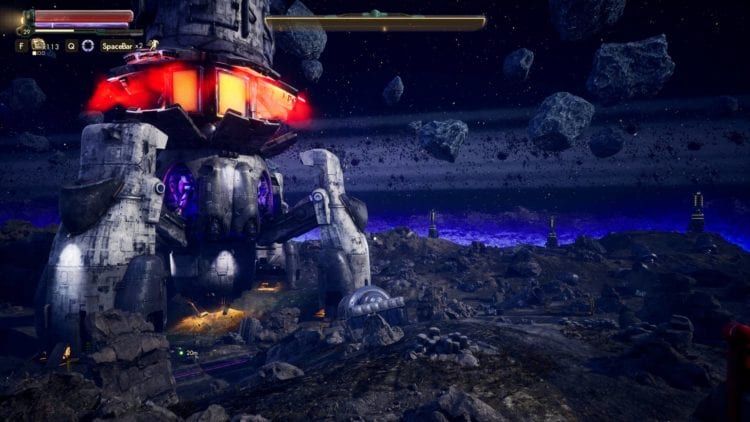 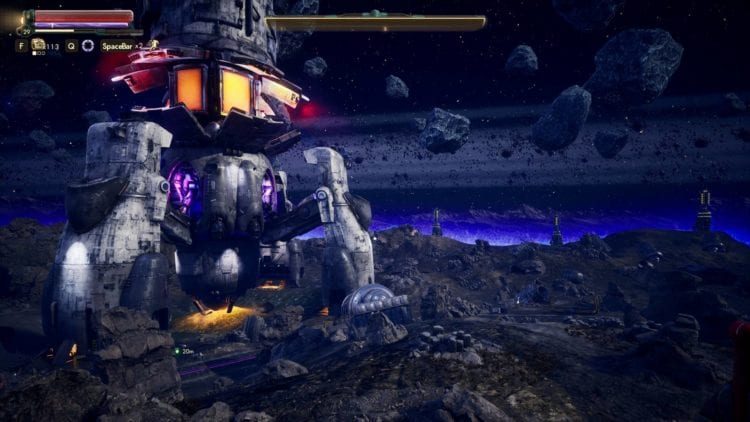 Low. And one of the only ones with a really noticeable difference. 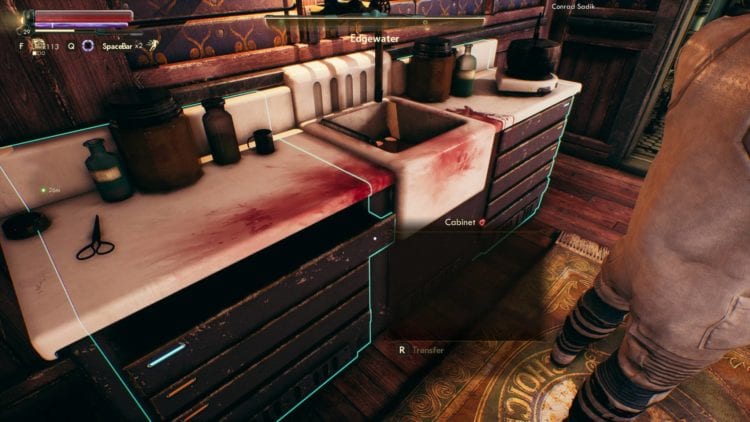 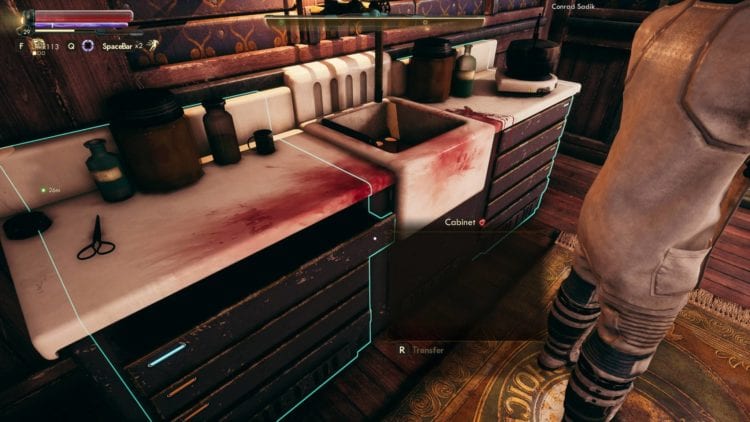 Low. Yes, I had to zoom in on the items on a counter to find some really noticeable differences.

It’s really hard to tell the difference in most of these, as long as we’re not accounting for Screen Effects. On some of the shots, you can definitely see improved shadows, but I daresay a few pics actually look better on Low. Figuring out which shots were on which settings slowly drove me mad, as did textures taking time to load, and things changing between the time of screenshots, and aaargh.

The Outer Worlds is one of those games that has a visual quality that sits on the edge. Lip-syncing and animations are stiff and fairly unimpressive, but the vistas are to die for. It looks better in screenshots than it does in motion, I’m afraid, but it’s still hard to say it ever looks bad. It just rarely impresses.

While the visuals aren’t too obviously different, there is a noticeable difference in the frame rate. In that top comparison shot showing how awful the Screen Effects settings are, Ultra would sit at about 75 FPS, while Low would go up to 100. Quieter internal areas could hit 120 FPS. Meanwhile, busier areas with lots of characters and interactive objects – a cantina, say – can drop to about 40 or 50 FPS on Ultra, while sitting at 60-70 on Low. 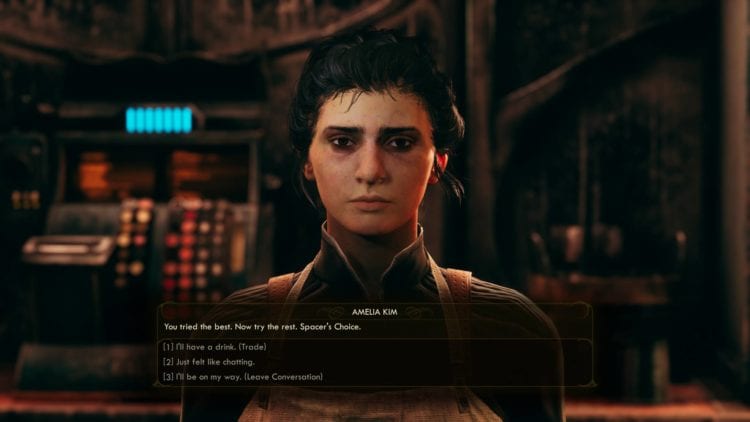 This is on Low. Could you tell?

I never really saw The Outer Worlds drop below 35 FPS no matter my settings, but spinning around rapidly definitely caused some stuttering as it tried to catch up. Most of the time, I played with things on High; it made me feel like I was making things look nice, while not impacting the frame rate too badly.

Not another bug hunt 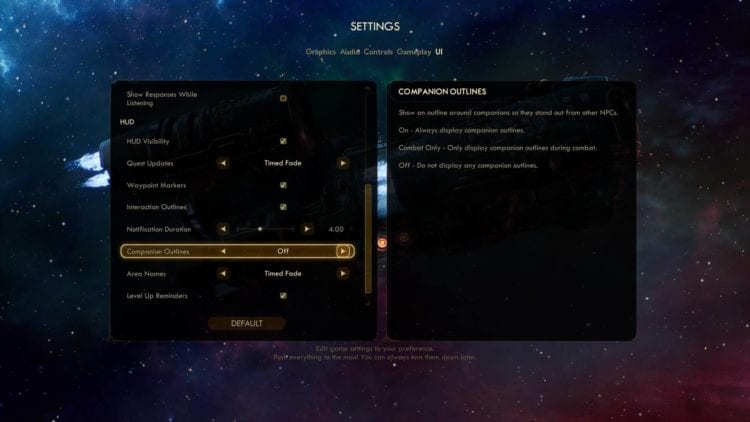 At least it controls wonderfully on mouse and keyboard. Keys are largely rebindable: A few that shuffle you into menus can’t be changed, but everything else is fair game. There are some holdovers from console controls – a weapon wheel that you can use if you object to the number keys, and holstering your weapon is done by holding reload – but for the most part the controls fit perfectly on mouse and keyboard.

So, let’s talk about bugs. With the Fallout inspirations and Obsidian’s occasional reputation of being forced to release games in an unfinished state, you might expect the worst. You shouldn’t.

Across two playthroughs, I encountered one major bug and pretty much no minor ones that I can recall. The major one was near the end of the game and resulted in a crash to desktop on entering a room. At a guess, something was amiss with the cutscene that played there… but this was easily bypassed by just shooting the people in the room. That was going to be the result anyway, so not a huge loss, and I’m hopeful that bug will be fixed shortly. And that’s it.

The end of the world(s) 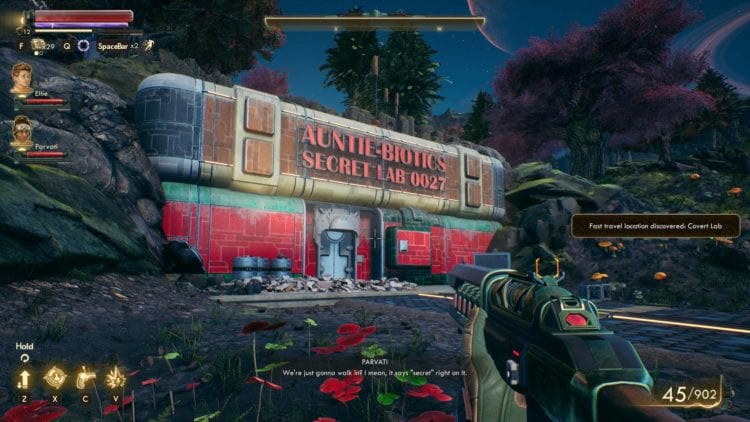 Nobody would expect it to actually be a secret lab, right?

There were a fair few minor imperfections, like rag dolls going a bit wonky, but nothing particularly worth noting. Not everything can be picked up or lobbed around and this is in Unreal Engine 4 rather than Gamebryo, so there’s probably less room for stuff to go horribly wrong, but hey – I’m not complaining about something working.

The short version is that The Outer Worlds holds up just fine on PC. I’m more than slightly miffed about the rubbish graphical options because having more discrete settings would mean I could make it look quite a bit nicer. With luck, someone will find console or ini tweaks and we can find ways to individually switch on and off specific things.

For now, though, stick Screen Effects on Low and then set the rest according to your computer. With that done, you hopefully won’t hit any issues with this otherwise decent PC version.

The Outer Worlds review – Not so brave new worlds

Destiny 2: Shadowkeep patch will nerf Striker Titans, and One-Eyed Mask may be next