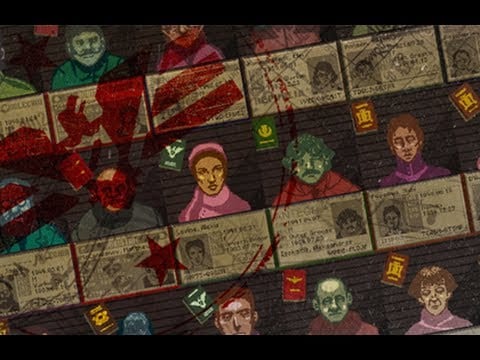 As someone who emigrated to the US, I know alllll about visas and security checkpoints and stern faced men rifling through bags, so Papers, Please makes me feel quite nostalgic. Ahh, remember that time when suspicious officials asked loads of questions about whether you’d ever visited Iran? Fun times.

Still easier than trying to get into West Germany during the early 80s though, I’m sure.

That cold war era of Communist immigration checks is exactly what Papers, Please looks to be channeling. It calls itself a “dystopian document thriller,” which sounds about right judging by the endless parade of grim faces, gunpoint searches and VISA DENIED that goes on in the trailer (below.) You play as a border official from the glorious communist republic of Arstotzkan, whose job it is to check the credentials of those trying to enter the partitioned town of Grestin from neighbouring Kolechia.

You must decide who is a legitimate visitor, and who might be a spy, terrorist or political dissident. In other words, it looks great (and horrifying.) You’ll be paying $10.00 USD for a smuggler to get it to you via all good digital distribution centers.