“The office is pretty crazy right now, everyone is smiling,” says a beaming Adam Brennecke in the final few minutes of The Road to Eternity. He’s a different, far more relaxed, Adam Brennecke from the one on-screen an hour and twenty minutes ago, discussing the dire circumstances Obsidian found themselves in during the early parts of 2012.

The documentary opens in symbolic shadow. Office lights dimmed. Interviewees talking against darkened backdrops. Before the success of Pillars of Eternity on Kickstarter, the lights really were about to go out on Obsidian Entertainment. The sudden cancellation of a ‘next-gen’ console project in March 2012 had forced CEO Feargus Urquhart to lay people off. Work continued on South Park: The Stick of Truth, but significant portions of the company had nothing to do.

“We were coming to work just to come to work,” Brennecke says. “We weren’t actually working on anything.”

Yes, that DOES sound depressing.

Pillars of Eternity backers (including myself) and those with an eye on the PC RPG scene know how this story ends, of course. In 2012, 75,000 people pledged around $4.0 million USD on Kickstarter and Paypal for Obsidian to make a game inspired by, and evocative of, the Infinity Engine titles of the 1990s. Three years later, in March 2015, the game was released to considerable critical and public praise, as well as commercial success.

The recently-released documentary Road to Eternity fills in some of the gigantic blanks left by the phrase “Three years later.” Available just to those 75,000-some backers at present, but planned for a wider release in the near future, it’s a substantial and often enlightening look at the process of games development.

Told through interviews with those who worked on Pillars of Eternity – Urquhart, Brennecke and project director Josh Sawyer are the predominant talking heads – and footage recorded at Obsidian between 2012 and early 2015, Road to Eternity charts the creation of the game, from pre-production planning to eventual release. It doesn’t shirk on the punishing working hours, the stress, nor the problems which crop up as a natural consequence of development. Ultimately, it’s a feel-good celebration of a studio bouncing back from the financial vortex, but it also accurately documents why games regularly hit delays, compromises, and can end up taking so, so long to produce. 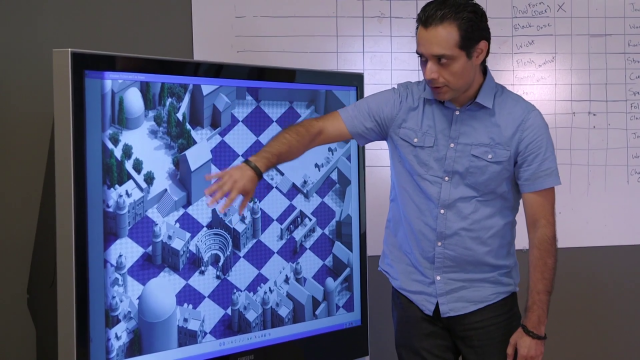 Okay, so we’re all agreed, the project will be MC Escher’s Chess instead of an RPG.

The documentary is made with an informed audience in mind (and sometimes simply takes footage straight from production meetings,) so it doesn’t always stop to explain every last bit of technical terminology. When it does, it tends to be informative. In a time where ‘Beta’ can mean ‘basically a promotional demo released to players after the final game is already being mastered,’ it’s useful to see Obsidian’s sequential production through Alpha and Beta. The latter, they admit “was a little bit hot” when it was released to backers in August of 2014.

There’s an interesting sequence from June 2013 around the production of a ‘vertical slice’; a post-prototype, functioning section of the game world (marrying the technological foundations with actual art assets and gameplay.) This particular slice is not for public viewing, but it’s of the type people will be used to seeing at trade shows like E3. There’s a problem. The game requires (but does not yet have) an operating cut-scene system.

Road to Eternity shows the internal tension between the desire to have all systems (including those cut-scenes) properly in place before the creation of the slice, and the discussions about which aspects to cut due to lack of time. Since Pillars of Eternity has no publisher to answer to, it’s revealed that there’s less of a need to ‘hack’ things into the vertical slice (effectively taking shortcuts without an actual structural system in place) just to look pretty and impress the financiers.

This is a brief peek at how systemic pressure can easily result in some of the more infamous trade show ‘gameplay’ segments in videogame history, where the final title is missing marketed features (because they were never actually implemented beyond a hack) or looks nothing like the footage. 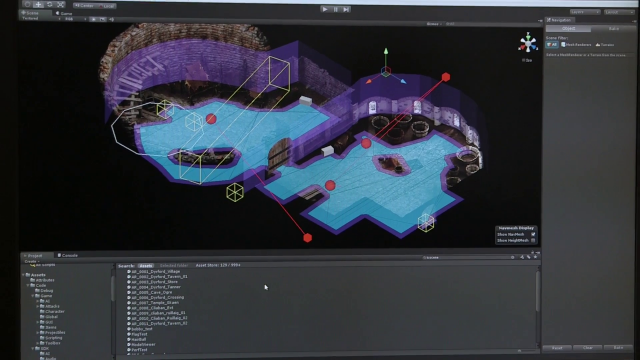 The lack of a true publisher is depicted as beneficial throughout the documentary, but does periodically crop up as the cause of more work pressure. When it’s decided that a ‘teaser trailer’ for their backer site is necessary, there’s no external marketing team for Obsidian to fall back on. This puts the creation of aspects like the game’s logo fully under their own control (an obvious plus,) but also means there’s no separate marketing budget and team to pay for this stuff and take the workload.

Road to Eternity also shows the studio getting frugal with the teaser trailer’s soundtrack, enlisting capable musicians from around the office for a lobby recording session.

The publisher-free nature of Kickstarter is a powerful part of its appeal for studios like Obsidian, who’ve suffered more than their share of awkward relationships (SEGA’s bizarre treatment of Alpha Protocol, the punishing turn-around time and shameful ‘Metacritic bonus’ contract from Bethesda on New Vegas,) but, as with several other larger-scale Kickstarter projects, the company did wind up needing some additional help.

The context in which Paradox are signed on to deal with additional marketing and distribution is a rare blind spot in Road to Eternity. You see nods to the partnership (such as when Brennecke is giving E3 presentations in a Paradox-labelled room,) but this aspect of the game’s production is not really given any notable screen time. A shame, because the altered role of publisher-as-distributor is one well worth discussing in relation to Kickstarter-funded projects. 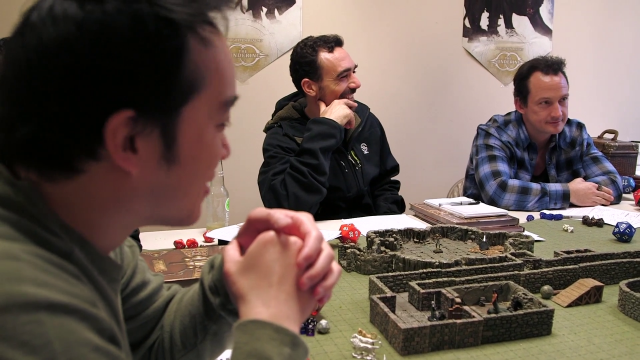 A rare Road to Eternity sighting of Chris Avellone. Seen here lured out by D&D.

Otherwise, this documentary distributes its one hour and twenty minute running time rather well across each aspect of the game’s development. It takes a broad approach, giving narrative and RPG mechanics their due alongside Maya animation and bug hunting, at the inevitable cost of being unable to dive too deep into specifics. For that, viewers will have to get handy with the pause function and enhance some of the background whiteboard sketches, adorned with charts, statistics, and doodles of a reclining Master Shake from Aqua Teen Hunger Force.

As well as offering a compelling look at games development at a medium-sized independent studio, Road to Eternity is structured around the uplifting tale of Obsidian’s well-earned escape from financial troubles. The staff are portrayed throughout as people, rather than coding automatons; recorded playing Dungeons & Dragons (ostensibly for work,) taking part in stress-relieving after-hours football matches, or just heading home in full cycling gear. They express relief, joy, and genuine surprise at just how well Pillars of Eternity is received on release day.

It’s a triumphant conclusion, accompanied by a suitably stirring piece of music from the game itself. The gloomy, shuttered offices of Road to Eternity’s opening shots are blazed away by light, hope, excited talk of expansions, and the fantastic potential resting in Obsidian’s hands now that they own their own intellectual property. Vindication for the studio, and for the 75,000 (and more) who backed Pillars of Eternity.

The Road to Eternity is currently available to all backers of Pillars of Eternity. A broader release is planned “soon.”