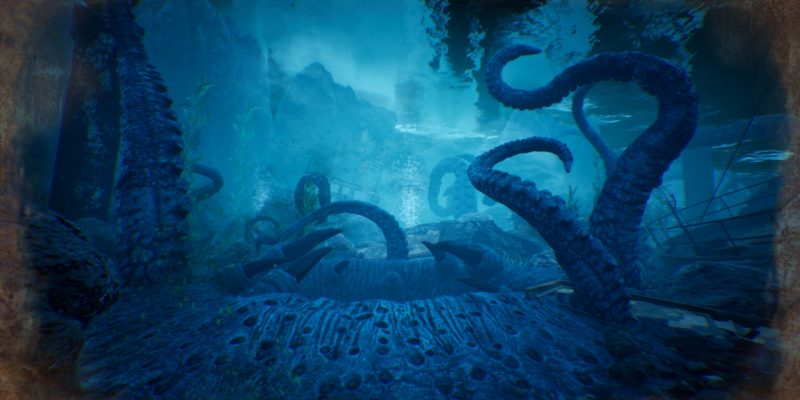 I thought I knew what to expect going into The Shore. I imagined a sort of walking simulator where you pick up notes and learn what’s going on little by little. And the game does that, but only at first. The Shore has some surprisingly strong production values and a variety of unsettling, unique locations and situations on offer. But it also has some truly bizarre puzzles that are bereft of logic, as well as tedious shooter segments that make the game feel a bit all over the place. Fans of the Lovecraft mythos will find things to enjoy about it, but its short runtime and questionable design choices might irk some players, even if the game is above board overall.

The Shore puts you in control of Andrew, a fisherman searching for his daughter on a strange island overrun with things that should not be. Black volcanic rock floods your vision as you walk past the wreckage of boats, their hulls broken and splintered on the shoreline. Seashells stare up at you from the ground and sea birds tend to their nests. A closer glance may show a black, featureless orb or monstrous, glowing meteorite. Something is very wrong with this island. In order to find his daughter, Andrew makes a deal with an eldritch abomination. The early part of the game is spent investigating the area around a lighthouse, finding documents and letters strewn about.

The narrative in The Shore is interesting and doesn’t quite regurgitate Lovecraft’s works like many games of its ilk. Although, in the end, it doesn’t come together in a satisfying manner. We don’t get much of a sense of Andrew as a character and there aren’t many details on what exactly is happening at any given moment. But many of the sights and individual moments are quite striking. There’s some impressive character modeling on display here, with unholy behemoths stomping through distant waves. The sound design is uniformly excellent as well. 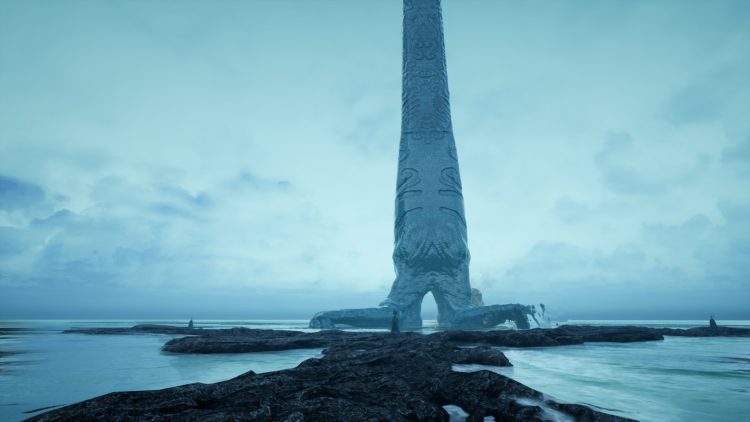 I have no idea what I just did

The earliest moments of The Shore will see you exploring the island. But it doesn’t take long for questionable signposting and nonsensical puzzles to rear their heads. The game’s first “puzzle” sees you placing coins in barriers, as well as putting statues on things that look like coat racks. During this portion, I had no clue what I was doing. Initially, the barriers wouldn’t move. I simply picked up every item I could find and watched as the game placed it where it needed to go when I randomly interacted with what turned out to be the right spot. This is a recurring theme for nearly every puzzle in the game. Nothing is ever clear or sensical.

Another maddening section drops you into a room with a bunch of heads in the ground. There’s nothing in the room but the heads and a weird contraption in the center of the ceiling. The Shore doesn’t lift a finger when it comes to basic instruction. I eventually attempted to pick up all of the heads, only for Andrew to die for unspecified reasons. It turns out that one of the many, many heads has a mark on it and it needed to be used while looking up at the thing in the center. I have no idea what any of that was supposed to represent. These aren’t puzzles; they’re random nonsense. Thankfully, though, they’re random nonsense that can be eventually figured out.

It’d be more excusable if nearly every puzzle in The Shore wasn’t like this. I get that eldritch environments are outside the bounds of human comprehension, but signposting can still be a thing in a video game. One puzzle simply took me a long time to figure out because it wasn’t clear that I could jump over a bit of nothing that was obstructing my path forward. Even then, I’m surprised I was able to solve that one at all. A little context can go a long way. 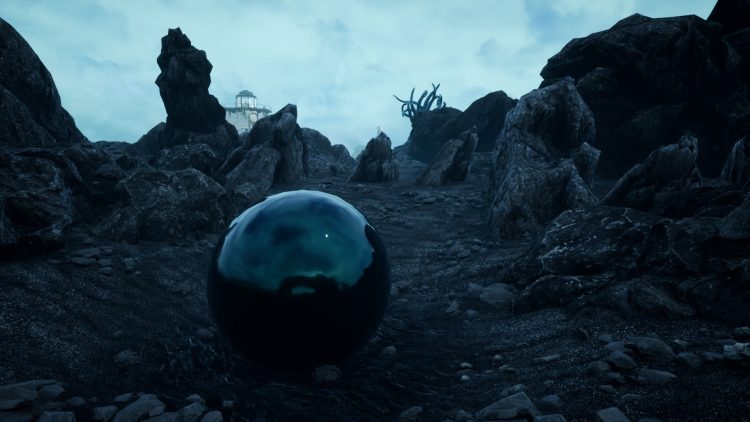 On top of the unfortunate aforementioned sections, you will also run from enemies in The Shore. And it’s just as tedious. They’re all similar, and can be summed up as you entering an area, realizing that a monster is following you, and, finally, you die by its hand. Or maw. Whatever. See, the monsters are so fast that the only way to get away from them is to already know the path forward. At one point in the game, Andrew obtains a triangle artifact that shoots a beam that can be used to destroy certain enemies and slow others down. What this means is that you’ll notice a monster is chasing you and will need to book it to the exit.

Of course, it’s not as simple as that. Once you have the artifact, you’ll have to shoot the monster until it’s stunned and then proceed forward. But monsters only stay stunned for a short time, so the best way to complete these sections is to first memorize the area layouts by trial and error. Then, when you know the way, you run backwards through the areas while shooting the monster constantly. These are all entirely doable, but far from enjoyable. 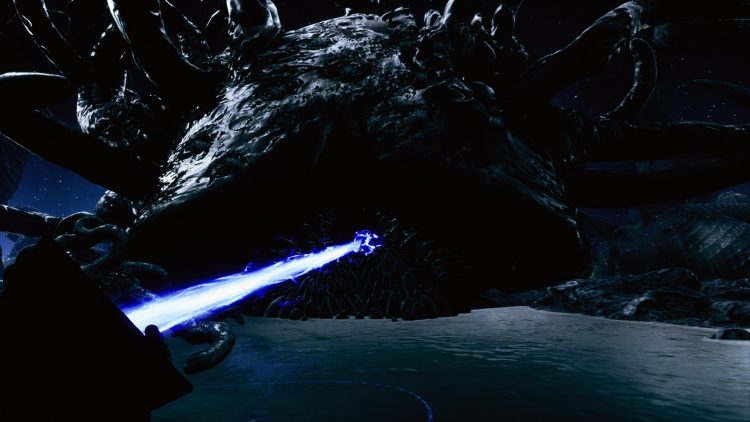 At least all of the environments and monsters are creepy and well realized. Everything would feel right at home in H.R. Giger artwork, with a lot of inky blacks and walls made of substances that don’t seem to exist in reality. As much as I disliked the puzzles and trial-and-error chase sections, I was still impressed by the atmosphere and visual design. To certain kinds of players, The Shore will be worth the journey despite its issues.

Not that the issues last all that long. The game can be completed in about two and a half hours, so The Shore at least doesn’t outstay its welcome. The puzzles use moon logic, the chase sequences are annoying, and the story isn’t all that satisfying. But the game undoubtedly has elements that are well worth paying attention to. You’ll only see a massive crustacean monster ride a pointy monolith on legs as it walks through the sea once in your life, I’d wager.

The Shore is short and has some truly questionable design choices, but its strong visuals and unsettling atmosphere will possibly make it worth a look for horror fans who don't mind being annoyed.