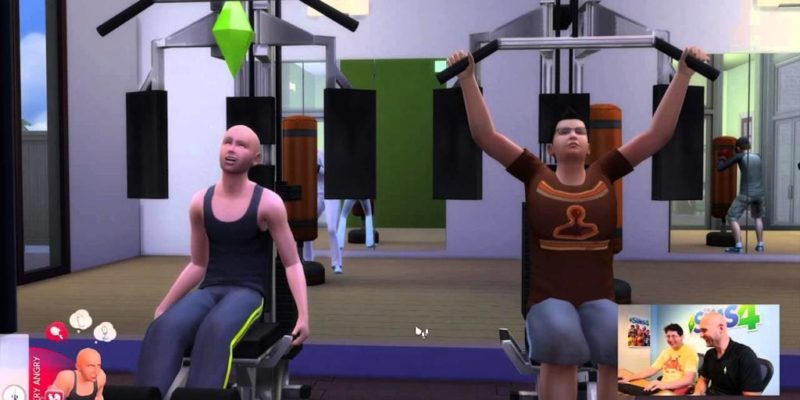 Pierluigi Collina visits the park and gets real mad.

While obviously not nearly as committed to making horrifying freaks in The Sims 4 as our own Tim McDonald, Maxis does a reasonable job showing off their game. In this new 20 minute gameplay walkthrough (below) you will witness the power of bros. Whether you want to or not.

After racing through some character traits, the trailer heads to Magnolia Blossom Park, which perhaps isn’t the first place you’d expect a pair of bros to want to hang out but there you go. In these green and lush surroundings we learn that in The Sims 4 being REALLY ANGRY is great for your athletic abilities. It gives the Sim on show the impetus to perform some fury-related push-ups; a special action related to his angered state.

Hang on, did EA just enforce a cross-the-board push for reactive emotions in their games? Is that why FIFA 15 has them too? Oh man, I wish FIFA 15 had the same character development tool as The Sims so I could make some amazing players.

Sorry, got a bit distracted there, back to the gameplay demo. The other Sim is feeling energised, in part because he took a shower and in part because he’s hanging with bros. And he seriously can’t get enough of that bro-hanging. Thanks to his energised state, he’s able to choose from a few special actions to cheer the other guy up. Amusingly enough, the pep talk doesn’t work and leaves his fellow Sim more miffed than ever.

After a fly-by of the park neighbourhood and an alarming joke about fish, the camera returns to find angry-Sim having an ‘offensive conversation’ with a passer-by. One can only imagine the horror of having to converse with an angry bro.

There’s then a bit of chat about some unique interactions your Sims can have with others, that are tied to the personality traits given to them during character creation. In this case, ‘debate game strategy’ is a possibility over a game of chess in the park. Doing that helped make a connection with the fellow chess player.

Travelling between worlds and neighbourhoods in The Sims 4 can apparently all be done on the same save, with the same Sims characters. Since I’m not overly familiar with the series I don’t know how much of a big deal that is, but the guys presenting certainly made it sound like a huge, important change. Sounds useful, certainly.

That was the cue to switch to a new location in the form of the gym. A fine excuse for some further enraged work-outs and a chance to learn some fitness tips from the local trainer, helping to increase the athleticism even more. The trainer was wearing a cowboy hat, so he was clearly an expert.

All of which still left time for a mega-bro party of bro-ness back at the Sims residence. A handy opportunity for the presenters to brag about how easy it now is to look at (and of course appropriate) user-created stuff from The Sims 4 into your own game. In order to spruce up the party residence, they grabbed a massive mansion from the list and plopped it instantly down (for a fair bit of in-game cash) on top of their old place. Not content with that, they also grabbed a pre-made music lounge for their shindig. Can it be a ‘shindig’ if bros are involved? I have no idea.

Turns out it’s a ‘house party.’ That makes sense. Another social event option was mentioned in the ‘dinner party,’ but that apparently was a bit too classy. The formerly angry Sim gets busy tending the bar (because obviously more drinking would help with his emotional problems) and, uh, then a Tropico style dictator shows up and starts making speciality cup-cakes. Then he sets the house on fire and the bros die. The perfect ending!

You too can see all of this in the 20 minute walkthrough, right here. The Sims 4 is due on PC in early September. It won’t have swimming pools or toddlers. Sorry folks.