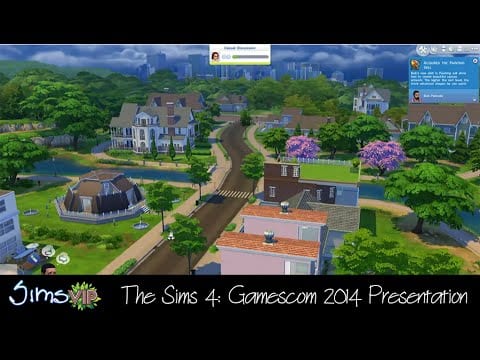 Bob and Eliza Pancake. Peter Moore commented on how the hell Bob can be unhappy with a wife that looks like Eliza, which was another joyously uncomfortable moment in the live stage demo.

And, um. It’s possibly the most entertainingly awful thing you’ll see all week. It opens in Create-A-Sim mode, with German chancellor Angela Merkel being recreated in Sims-land. Really. And then we get a look at a Sim recreation of Peter Moore, who is apparently an Active, Music Lover, Creative type with a Bodybuilder aspiration.

Next up is Build mode, where Peter gets to move the rooms around his house. Then he spots a football stadium in the Gallery – as a full building, created by another player, that can be imported in – and decides he’d quite like to live in that. And then he paints it red because he’s sensible and therefore is a Liverpool fan.

Finally, of course, is Live mode. This opens with the cringe-inducing “Hungry Games”, in which three starving Sims are placed in a maze. And then one of them dies the instant it’s unpaused, prompting an appearance from the Grim Reaper. Sim Peter begs the reaper to spare the life of his fallen comrade, and… then starts thinking about bodybuilding, because that’s what you do when someone dies and you’ve just begged Death.

The team then swap over immediately to another scenario before seeing how the previous one plays out, so maybe that wasn’t quite what was intended. This second scenario opens with a look at the neighbourhood as Franklin explains that you can go fishing, or collect plant clippings and splice them together, or go and meet other Sims. After some incredibly awkward discussion, we meet Bob and Eliza Pancake; Bob is gloomy, while Eliza is an upbeat and cheerful neat freak. They apparently aren’t getting along too well at this point (or so we’re told, because that wasn’t exactly obvious) and so Sim Peter is brought in to mix things up.

Everyone has special interactions depending on their mood and personality; Bob can complain at Peter, or Peter can try to cheer Bob up. Neither of which works very well, so then they start dancing. Then Sim Peter goes outside, where he finds a Cowplant, which is a giant Venus Flytrap-looking thing with a cow’s head and a cake for a tongue. Peter tries eating the cake, and instead the Cowplant eats him. And then vomits him back up. I swear I’m not making this up.

And that’s it! The Sims 4 demo ends. Franklin explains that the Create-A-Sim demo (which I played with here) is now available to everyone and can be downloaded from the official website, and the full game is due out in three weeks. Hooray.

So yeah, it was a bit of a train-wreck and is therefore definitely worth watching. It’s one of the least impressive looks at The Sims 4 yet, with the live game scenarios just being terrible. Such is always the problem with a live demo of a simulation, I suppose, but it proves that some of the quirky little oddities about The Sims – like people dying and then someone else being sad for 30 seconds and then thinking about cake – are still fully intact. For better or worse, then, The Sims 4: it’s like the other The Sims games.