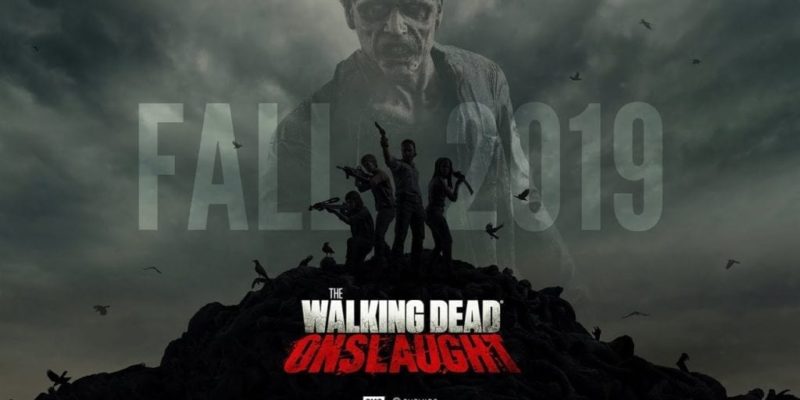 Another Walking Dead game is on its way later this year and it’s called The Walking Dead Onslaught. This is the second title in the past week to be announced by VR specialists Survios, the other being the pirate combat game Battlewake.

The Walking Dead Onslaught will thrust players into an original Walking Dead storyline where players will have to venture out into the world on supply runs and face the zombie horrors. The game will also feature randomized weapon and item pickups to help dispatch the undead. The game comes with what Survios call their Progressive Dismemberment System which will apparently put “you so close to the visceral horrors of the walker threat”.

The Progressive Dismemberment System allows players to get up close with the horrors of zombie battling. There’s ‘delimb’ where walkers’ limbs can be removed at their joints, ‘carving’ will create realistic wounds, ‘impaling’ impales enemies and they will react to where they are stabbed, and finally ‘context-based physics’ which will have enemies resisting when pulling out weapons. How lovely.

“Not only is The Walking Dead Onslaught a dream opportunity for the megafans in the studio, but we’ve had the unique challenge to further evolve VR with our ‘progressive dismemberment’ technology,” said Survios head of studio Mike McTyre. “This is a standalone game experience that is carried by one of the most beloved TV IPs in the world. AMC has been an incredible partner throughout the process, encouraging us to push VR combat and immersion to match those iconic, heart-pounding moments that can only be experienced within the world of The Walking Dead.”

A Steam page is already live for the game and it’s expected to be released this autumn for Oculus and Vive VR systems. It sounds like it could tick all the boxes for fans of the series.