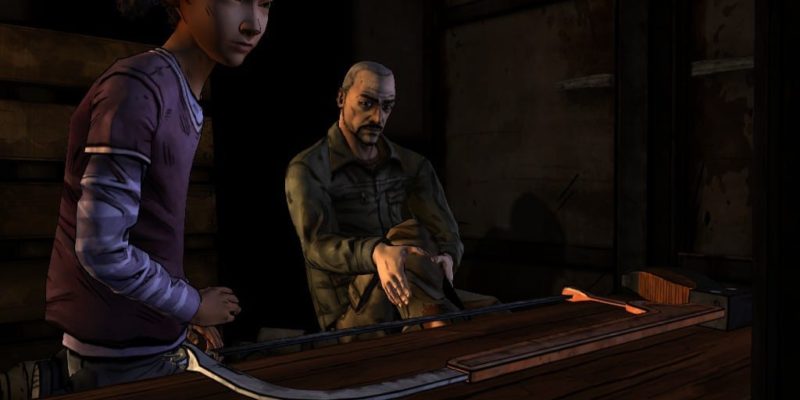 Human beings at their worst are scarier than the zombies of the apocalypse. It’s a terrible truth that The Walking Dead has been able to show us from the franchise’s beginning. The second episode of Season 2 is no different and brings human conflict back to the forefront of the game and the narrative. William “Bill” Carver, the main antagonist of the episode, is brought to life — disturbingly — by Michael Madsen and may offer a greater threat than hordes of the undead.

The episode begins immediately following the events of the first, with Clementine trying to survive with whoever she chose to run to at the river. Unlike the inconsistencies I encountered loading Season 1 to Season 2, everything followed through properly as it should. If Clementine chose to run to Nick’s aid, the episode will start locked in a small shed with copious amounts of jarred whiskey. If the choice was Pete, a small utility van serves as the “safe house” and will force you to take a serious look at a hacksaw. In my case, I’d opted to save Nick — honestly, who is going to rush to the aid of someone with an obvious bite? If you do, I commend your compassion and suggest we not share the same survival group, because I’ll leave your butt behind!

Once you’re through the episode’s initial hook, the real fun begins. A close encounter with an intruder at the cabin is infinitely more harrowing than running away from or fighting zombies. There’s a real-world sense of fear, a familiarity of the situation that anyone with children hopes never happens: two girls left home alone while a stranger walks around the house and looks in windows and a face-to-face encounter provides a seemingly friendly, polite man who only wants to befriend Clementine and is looking for his “lost friends.” This scenario is an all too real one that left my heart pounding. Clementine, proving herself to be more of a capable little soldier against the undead, still seems overwhelmingly vulnerable to a large, predatory, middle-aged man. Time and again in the episode, I felt like Clem’s ability to deal with Walkers was becoming old hat, one that she seemed to be wearing with confidence and comfort. Human interaction isn’t so simple, though, and feels more perilous.

While dealing with Walkers presents the options of “kill” or “run away,” how you deal with Carver’s arrival will be up to you. Again, I found myself wondering what the adults of this world are thinking. In the first episode, Clementine is left alone in a public bathroom — a questionable decision regarding an eleven-year-old girl in the best of times — and then, in the second, she’s left alone with another child in a cabin in the woods when the undead are outside and a maniac is looking for them. I can’t say I’d recommend any of these people as babysitters and it makes me miss Lee watching over our protagonist like a hawk.

Throughout the episode, my own version of Clementine continually proved herself at every turn, dealing with zombies and humans alike. I began to see her more like Arya from Game of Thrones, a deadly and intelligent young woman, able to weave through difficult situations and horrors with ever-increasing skill. However, the threat of a greater enemy like Carver makes it all come crashing down and the fact that Clementine isn’t a grown adult yet keeps forcing itself to center stage.

I remained on the edge of my seat throughout the story until the end — at which point I can quite literally say I made a leap from my chair and bumped into the wall behind my desk, knocking a picture onto my head and causing the cat to flee the room in as much terror as I felt by watching the events unfold on my screen. Fortunately, I wasn’t harmed, which is more than I can say for all the characters I’d been foolishly getting fond of.

The glitches from the first episode don’t seem to have been improved any; a floating gun in the hands of a character at one point and a gun floating on its own in the background at another. As with before, these were isolated and distracting but didn’t affect the gameplay.

Janel Drewis provides a new song to the end credits titled “In the Pines.” A moving folk ballad, it provides the same emotional kick that “In the Water” did the first time out. “You caused me to weep, you caused me to mourn,” the lyrics say and I have to agree. I might not have wept, but a few tears rolled and I mourned for the wonderfully written characters that have left the narrative.

Episode 2 hasn’t eliminated the minor technical flaws, but has really upped the stakes of the story itself. I spent less time moving around and figuring things out than I did before, but this seems to improve the pacing substantially. The focus is on the drama of the narrative, the fear of being hunted and chased and the desire to keep moving forward. A same-sex couple is introduced in the game without any ado or fuss. It’s a subdued, quiet relationship that is treated as mundane as it should be; just another couple trying to survive in the zombie apocalypse. An exceptional antagonist with nail-biting encounters and even a surprise revelation at a ski lodge make this my favorite episode in the franchise yet.

The narrative really kicks it into high gear

Clementine is shown exceptional depth, both a capable survivor and a vulnerable little girl

Fun Stuff: How To Use Gamestop As A Bank

Keen on a remake of Oddworld: Abe’s Odyssey? New n Tasty Remake Will Have to Sell 25K Copies