As PC Invasion’s resident AMD-card-haver (what can I say, I like an underdog,) it falls to me to have a look at performance in The Witcher 3 with the newly released Catalyst 15.5 beta drivers.

My machine isn’t exactly the perfect test subject, because I have an older 2GB 7870 card rather than a fancy R9, and (perhaps worse,) it’s paired up with an i3-2100; which means there’s often a chance of a CPU bottle-neck. Still, if you have an older processor and want to know how it’ll cope with The Witcher 3 when combined with a mid-range AMD card, this is the article for you.

Before installing the 15.5 betas, I settled on a test area with the 15.4 betas. I’m in the Velen portion, so the bridge area near the ghoul-ridden battlefield (where the guy selling the dodgy passes hangs around, along with a lot of refugees) seemed like a decent, busy-ish area to contrast with some basic trotting through the countryside.

This is the bit I’m talking about. The one you could call THE FOLLIES OF WAR.

From that bridge area, I travelled to the Inn at the Crossroads (another place with a few buildings and NPCs.) I did both “runs” at around 5am in game time, so as to try to keep time of day and weather conditions as similar as possible.

Here are the graphics settings used throughout. It’s basically 1920×1080, with a mixture of medium and high settings. Shadows on low (because I can’t tell much difference) and textures on low because a recent patch seems to have set it to that and I didn’t notice until later on. Hairworks is off.

Post-processing is a mixture of on (anti-aliasing, light shafts) and off (motion blur, chromatic aberration, screen vignetting.) That’s mostly out of preference rather than for performance.

You can click on any of these to make them bigger, if you wish. 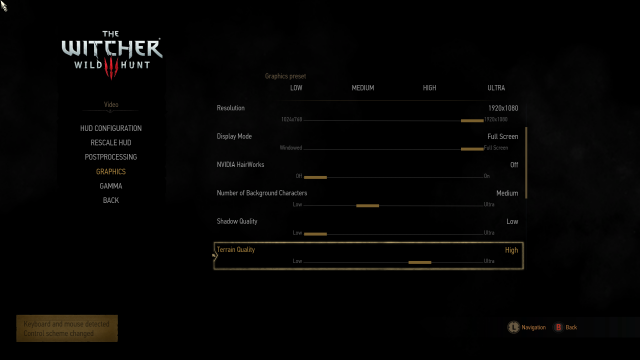 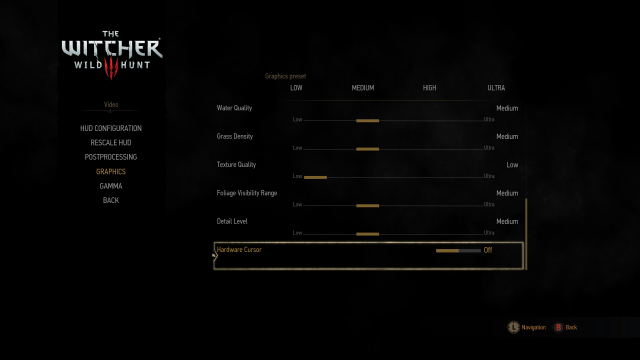 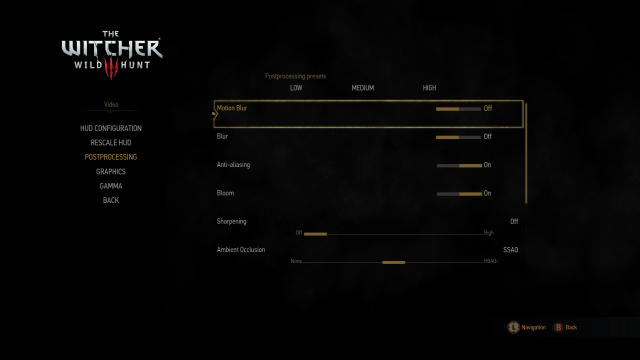 Aside from FRAPS (to keep an eye on the frame-rate) and whatever Windows 7 has going on in the background, The Witcher 3 (version 1.04) and GOG Galaxy were the only programs open.

With the older 15.4 Catalyst drivers, that refugee and battlefield area was hanging around the upper 30s, in the 35-40 range. Moving closer to the refugee bridge would make it take a hit while it loaded stuff in, but that’s been consistent for me throughout the game.

Any time The Witcher 3 feels the need to load in some new buildings, or a new bit of area, the game hitches up for a second or so and the frame-rate tanks to 20-some. I’m fairly sure I can blame my i3 processor for some of that. Luckily, it doesn’t occur all that often.

Roach-ing my way through the countryside to reach the Inn at the Crossroads had me sat at 40-45, mostly a solid 40. The Inn area was clearly more demanding, dropping to the low 30s before settling around 35. There was also some pretty mental NPC pop-in (peasants spawning in my face, how demeaning,) which has been something I’ve noticed in the game since a couple of patches back.

Considering my specs, though, I’ve actually been pretty satisfied to date with this level of performance. 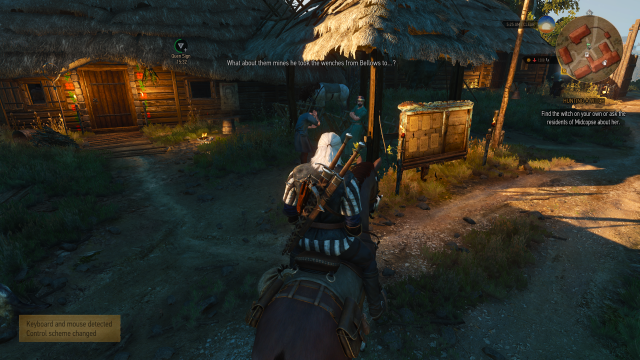 After jaunting around with the 15.4 drivers for a bit, I did a full uninstall with my go-to driver cleaning program, DDU. It did its job, the 15.5 beta installed smoothly, and I popped back into The Witcher 3.

I think there were some minor performance improvements, but they could also be the result of “new driver placebo effects” or just the somewhat dynamic nature of The Witcher 3’s open world.

Riding through the countryside was the same old mostly-40-sometimes-45-FPS affair, so no discernable change there. The Velen battlefield area appeared to be happier holding at 40 than it was with 15.4. Getting near to the refugee pile on the bridge dipped me down to the 30s again, as before.

The Crossroads Inn also seemed to be squeezing out a couple of extra frames with the 15.5 betas, but again I’d be wary of putting too much stock in that (especially as it’s based on me just watching the FRAPS counter.) 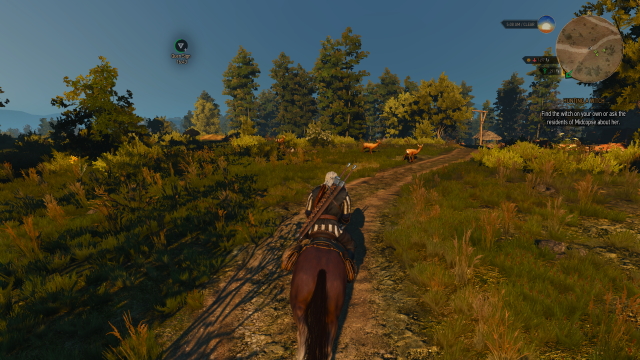 A mixed verdict for all the 7870s out there, then. No huge changes for me, although the performance could quite easily be CPU limited to some extent. Neither frame-rate nor frame-time (that I could tell) got any worse, and I’m fairly convinced it bumped me up a frame or three in some areas. Nothing fancy, but not bad either.

Based on that, 15.5 isn’t an essential beta to install, but nor should it hurt. If you have an R7 or R9 series card (and a better processor) you may very well get more impressive boosts, so under those circumstances I’d say it’s worth trying.

Rockstar Banned this GTA V PC Player for ‘Nothing’