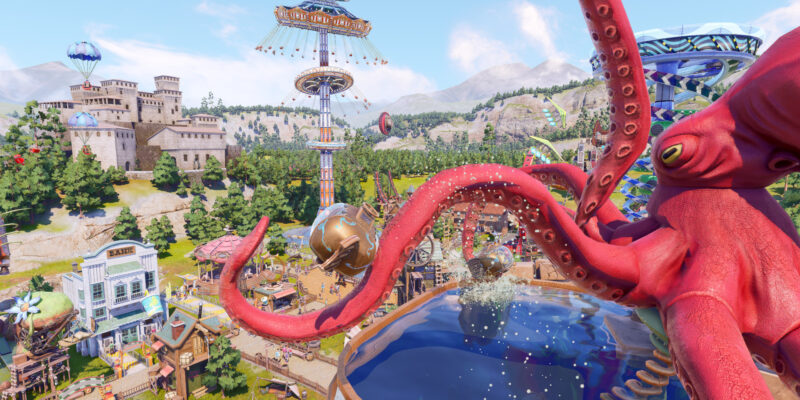 Many of those who played the RollerCoaster Tycoon series during its prime likely have quite fond memories of it. Managing a virtual amusement park and creating intricate thrill rides from scratch have an undeniable appeal. RollerCoaster Tycoon tapped into that appeal during a time when very few theme park management sims even existed. The series may have lost its luster in recent years, especially with the negatively-received RollerCoaster Tycoon World, but the desire among certain players for a fun new theme park management sim remains. Thankfully, Park Beyond, a new take on the genre revealed during yesterday’s Opening Night Live show, may provide what fans have waited for.

While the Park Beyond debut trailer did not feature any gameplay, it did give some idea as to the core premise of the game. Park Beyond emphasizes “impossification,” which essentially means that players can build parks and rides that go beyond the boundaries of what is physically possible. Rides featured in the trailer include a roller coaster cart that shoots out of a cannon, a multitiered merry-go-round, and a giant octopus that tosses around some kind of capsule with the passengers inside.

Developer Limbic Entertainment had made a management simulation game before in the form of Tropico 6, but Park Beyond marks the studio’s first foray into the theme park management sim genre specifically. According to the developers, Park Beyond sets itself apart from games like Planet Coaster not only through its off-the-wall rides but also through its story-focused main campaign. The developers ensured that these distinctive features would not distract from the depth of the game’s management systems.

Now that gamescom 2021 has revealed Park Beyond, theme park management sim fans will be able to scratch their itch relatively soon. Those interested in learning more about Park Beyond can check out this video showing off the alpha build of the game’s roller coaster editor.