It finally happened, a decision made about Thief by Eidos Montreal that I can’t complain about too much. In the latest ‘Stealing Time’ podcast thing in which the developers interview themselves (no, I don’t understand that part,) the participants chat a little about User Interface customisation in the upcoming game.

Here’s the sort of thing you can alter. 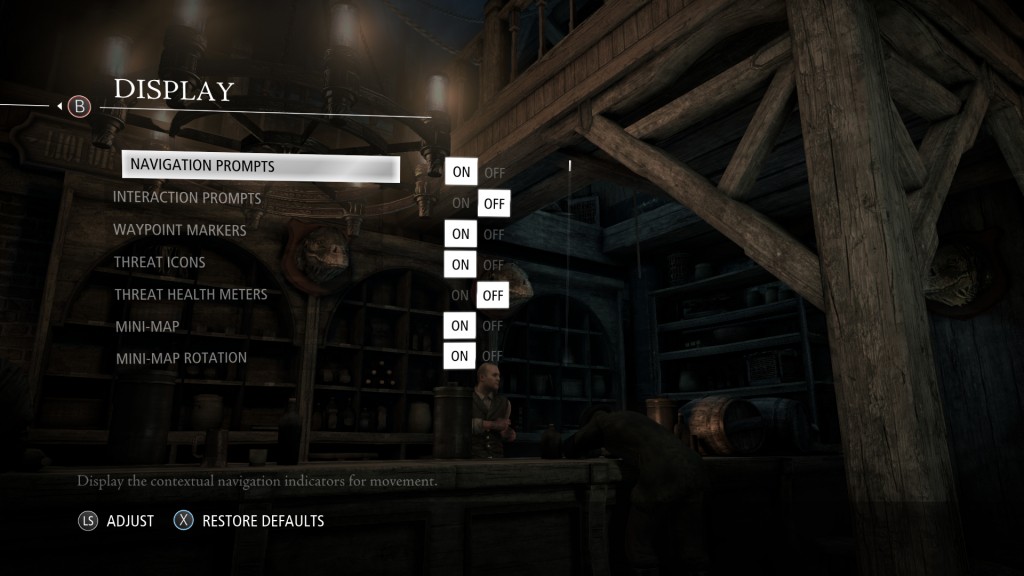 Can I have Stephen Russell “on,” please?

You can also toggle the light gem, Garrett’s narrative hints, loot glint, health meter (on/off/fade) and a whole bunch more. Basically, anything from the UI or ‘helper mechanics’ that you don’t want can be ditched. Or retained, depending on what you prefer. That’s all good stuff.

I’m not quite as sold on the various difficulty ‘mods’ that can augment the play-through in various ways, but only because the original pair of Thief games had such a unique approach to difficulty levels. Here’s how Eidos describe them:

You can create your own custom difficulty level by toggling on any (or all!) of the following mods:

Base difficulty: easy, normal or hard

Classic Thief Mods
* Chapter Save Only: manual saves and checkpoint auto-saves are disabled.
* No Focus: the use of Focus is completely disabled and no Focus Points are earned.
* Stealth Takedowns Only: you cannot perform combat Takedowns and Takedowns from above.
* No Reticle: no aiming reticle is displayed when drawing the bow.

Legendary Thief Mods
* Specialty Arrows Only: only Blunt, Water, Fire and Rope Arrows are available.
* No Resources: food (health) and poppy flowers (Focus) are not consumable.
* It Hurts Not: if you take any damage, the mission is failed.
* Expensive Tools: the cost of arrows, tools, food and poppies is greatly increased.
* Slowed Movement: running and walking speeds are reduced.

Ultimate Thief Mods
* Iron Man: if you die or fail a mission, you lose your game and must restart from the beginning.
* No Upgrades: non-critical upgrades are disabled.
* No Kills or Knockouts: if a human or animal is killed or stunned, the mission is failed.
* No Alerts: if a human or animal detects you, the mission is failed.

By the looks of the following screenshot, using a selection of these mods will give you a related points modifier for the mission you use them on. 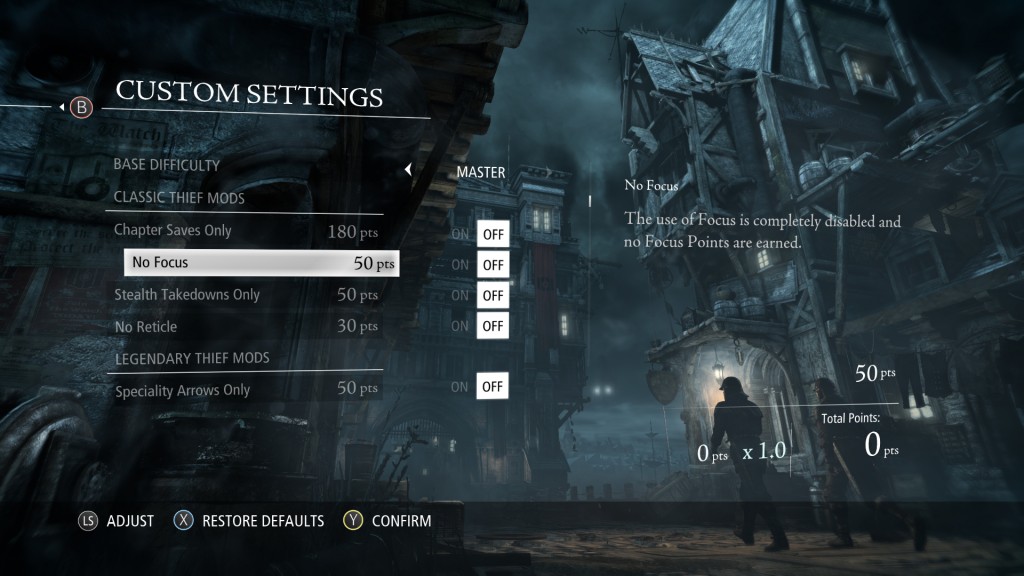 Previously, Eidos have removed the experience points system and quick-time events from the game. It kind of seems like experience points have been decoupled from their role in ‘upgrading’ Garrett and morphed into general points for leaderboard purposes.

Thief is currently due for release in February 2014.