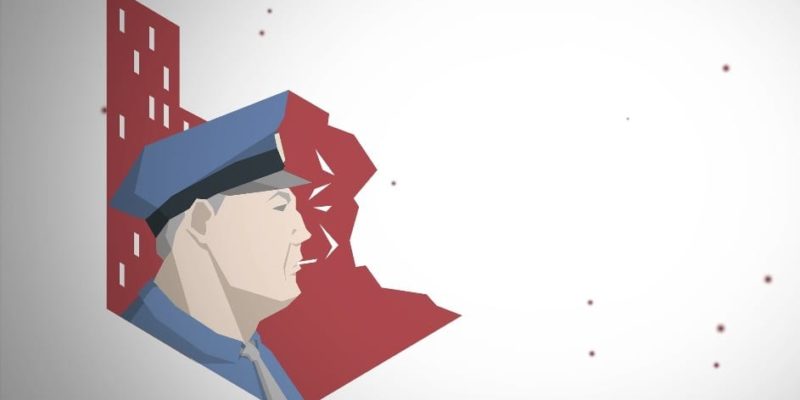 Full disclosure: I backed This Is the Police on Kickstarter. To my mind that doesn’t actually mean anything except that I paid for it, but hey, if that indicates some sort of bias to you, now you know!

A distant relation of mine (now sadly deceased) was known to joke when younger that he wanted to be a crooked cop when he grew up. His reasoning? It was the best-paid occupation that he could reasonably undertake. I’m beginning to wonder if developers Weappy perhaps knew him at some point.

This Is the Police is a strategy game about being a crooked cop. You’re Jack Boyd, the cynical outgoing police chief in the crime-ridden city of Freeburg. Fed up with how things have gone, you have one mission: make $500,000 in the 180 days you have before your retirement. How you do this is up to you. 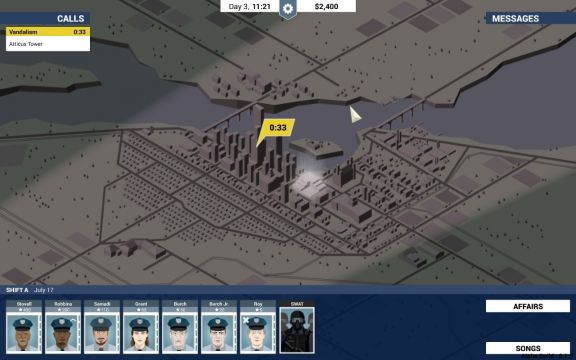 You can, for instance, rely on Integrity and Honour and all that; if you manage to hit all of your targets, earn bonuses for taking down gang leaders, and keep City Hall happy enough that they offer constant raises, then you might actually be able to legitimately earn that cash in the time you have left.

Alternatively, the leaders of organised crime in the city… well, they’d be happy to have a police chief in their pocket. They’re more than willing to pay for you to turn a blind eye to certain 911 calls that come in – and maybe they’ll have a job for your officers, every now and then. Just hope that your officers don’t try reporting you to Internal Affairs. Although if they do, perhaps your new buddies can maybe set up an ambush for any troublemakers. 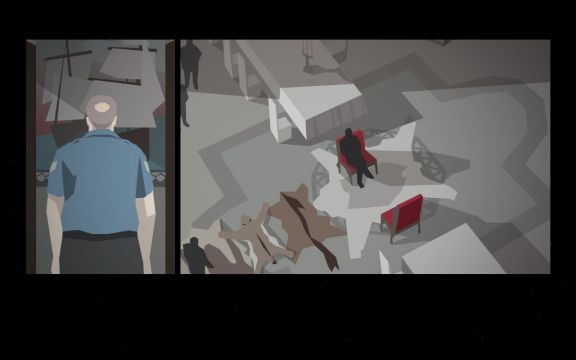 Cutscenes have this wonderful stylised look, and some decent voice acting to go along with them.

Of course, you do still have to actually do your day job by dispatching officers to crime scenes (in the numbers required to keep them safe, because police officers dying doesn’t look good to either your other officers or to City Hall) and sending detectives out to investigate major cases. You need to keep City Hall happy to get better equipment and a budget that can support more officers. You might even have to accept some of their utterly ludicrous demands, like firing all of your black officers because of demands made by a racist group. (And note that you actually have to have legitimate reasons to fire people, or you risk lawsuits.)

Fundamentally, This Is the Police is a game about choices – big and small. On the larger scale, it’s about how corrupt you’re willing to be. On the much, much smaller scale, it’s about little decisions like how many officers (and which ones) you’ll send to each 911 call that comes in. This call might look like it needs the attention of four officers, but it might be a hoax, and if you send four people out then you’re going to be pretty understaffed should another call come in before they’re back. 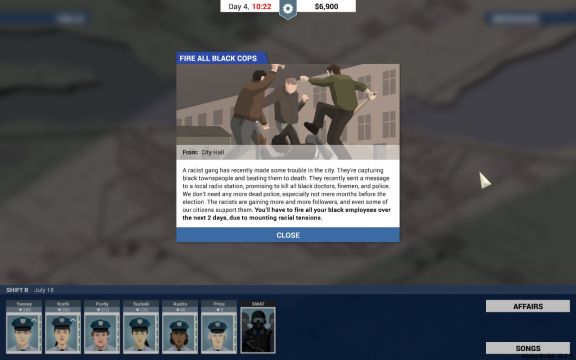 Because that’s the best way to deal with any sort of situation like this, obviously.

You’ve also got choices in the form of little choose-your-own-adventure vignettes that occasionally play out when your officers respond to calls. Perhaps they’ve found a stolen car outside a house, and need your direction on how to approach – knock on the front door? Immediately bust in? Sneak around the back? These decisions will have an impact on whether the offender is caught, whether your officers survive, and whether any civilians get killed in the crossfire, but the game doesn’t pause while you’re making them. The longer you take to decide, the more calls that’ll come in.

If that sounds fantastic… well, that’s why I backed it. There’s a huge amount of potential within. Right now, This Is the Police doesn’t really hit that potential, but it’s in alpha: if it did, I’d be utterly stunned.

That said, I’m not sure quite how much of what I want from This Is the Police is stuff that’s planned, so I’m going to go ahead and outline my issues with it anyway. 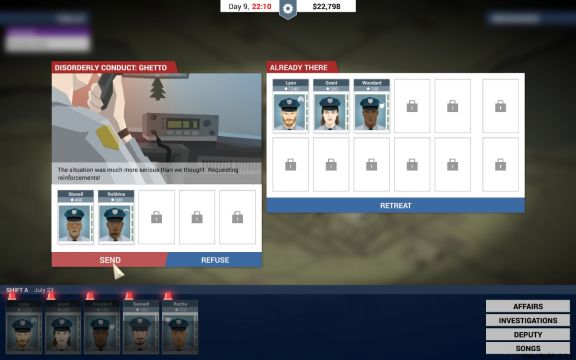 You could always refuse. Just, y’know, people might die.

First and foremost is randomisation. I have no idea how much this is going to play into the finished product, but I’d like a degree of randomisation in terms of what crimes happen, and when. I played two separate campaigns, and both had the same crimes happening at the same times… which is quite an advantage in terms of knowing what’s a hoax, what solutions work for each crime, and when I’m going to need to have more officers standing by.

The crimes themselves don’t have to be random, but the occasions when they occur should be. I often mention Floor 13 (or its latter-day spiritual successor, Black Closet) which did much the same thing: you had limited resources and you had to make tough decisions about which resources to allocate to which metaphorical time bomb, and which bombs you were going to allow to explode. After a few plays, you’d know how to solve most of the cases in Floor 13. This didn’t help that much, because you could still have to scramble to recover when a few really nasty situations happened in quick succession, and that was half of the fun. And also half of the replayability.

(I’m sort of assuming randomisation of some sort is going to be in following the transition from alpha to beta, by the way, but we’ll see.) 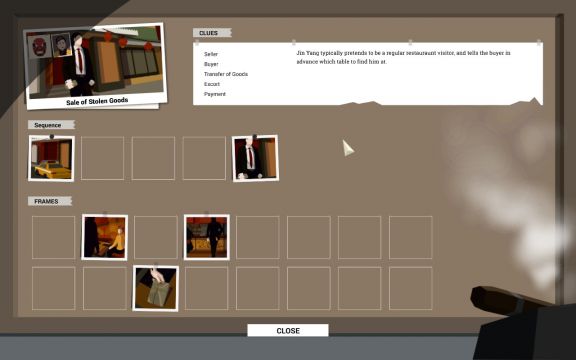 Detectives bring you new frames for their investigations. It’s up to you to slot them in, in the correct order – but not all of the frames are necessarily correct.

Second is the DEATH SPIRAL. This was what killed off my second game: I got to the point where City Hall was so displeased with my progress that they kept slashing the number of officers I had available, which meant that I then couldn’t respond to half of the calls I got, which meant that City Hall was pissed off and I lost more officers, which… etc.

I mention neither of these as a real negative, by the way; I strongly suspect both will be addressed before launch. Death spirals aren’t inherently a bad thing, either, but it feels a bit too easy to get sucked into one and far too hard to fight your way out right now. 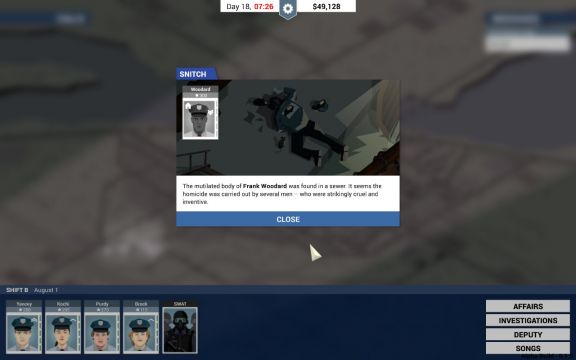 And, y’know, there’s plenty of stuff that isn’t in the alpha. Snitches don’t appear to do much right now except die, for instance, and a bit more feedback on exactly how much I’m pissing off City Hall would be nice. Nobody’s tried ratting me out to IA yet, either, which meant that most of the particularly grim options offered up by the Mafia were disappointingly meaningless.

But as a ludicrously polished proof-of-concept, the This Is the Police alpha works tremendously well. A strategy game based around murky police politicking is a brilliant idea, and This Is the Police appears to be capturing that quite well. Definitely worth putting a stake-out on this one. It’s a person of interest, and we’ll be conducting a thorough investigation of it as time goes by.

New Need for Speed Title Is Coming In 2017