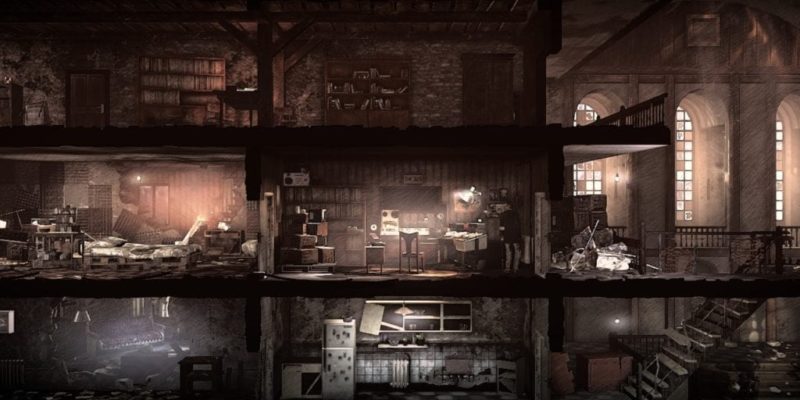 The “fourth estate” refers to the news media — that last bastion of hope for society when all others are lost. Journalism and the free press have been around for centuries with the capability to inform millions and sway public opinion. That brings us to The Last Broadcast DLC for This War of Mine. It’s the second episodic offering for the title following Father’s Promise. It focuses on the experiences of a couple during Pogoren’s darkest hour with journalism and freedom of the press as a central theme.

Please note that this review will contain spoilers for one of the game’s endings. 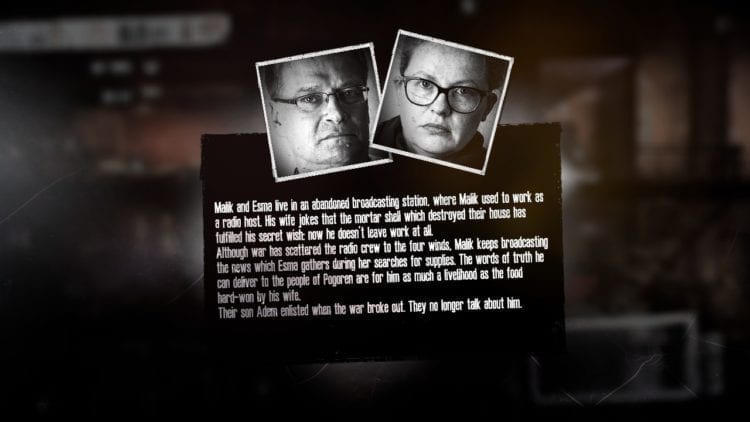 Your two survivors: Malik and Esma.

In The Last Broadcast, players take on the role of Malik and Esma. Malik is a radio broadcaster who spreads the news about the army’s atrocities and the plight suffered by Pogoren’s citizens. Esma is his strong-willed and highly capable wife who takes care of him.

While I did say that you control the two, it’s mostly just down to Esma. That’s because Malik is disabled. He cannot go out to scavenge or even guard your house. He can’t even drop down to other floors to make repairs, craft items, or grab medicine. He’s entirely dependent on Esma to take care of most of his basic needs.

That means This War of Mine’s general difficulty ramps up since you only have one character to control for the most part. It’s akin to Father’s Promise where Adam’s the only one who could take care of his sick daughter. Unlike Father’s Promise which follows a deftly written narrative, though, The Last Broadcast has a little bit of sandbox-style gameplay that This War of Mine’s base game has. You still get to craft items and discover more nooks and crannies in your house (as Esma) while Malik waits to broadcast the news. And yes, that’s the first problem — there’s a whole lot of waiting. 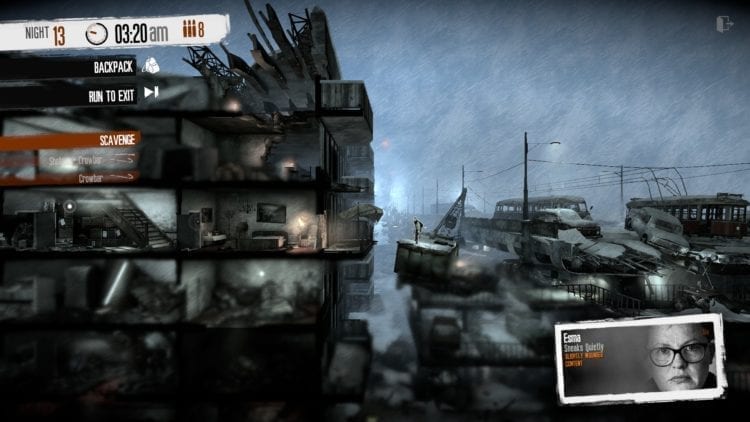 Scavenging near the bar.

In order to progress further through the game’s narrative, Esma has to explore through various locations around Pogoren. There are parking lots, toy stores, music lounges, gas stations, and more. These locations might have their own dangers such as scavengers or worse, army soldiers. Early on, some of these NPCs will leave you alone; much later, they kill on sight. 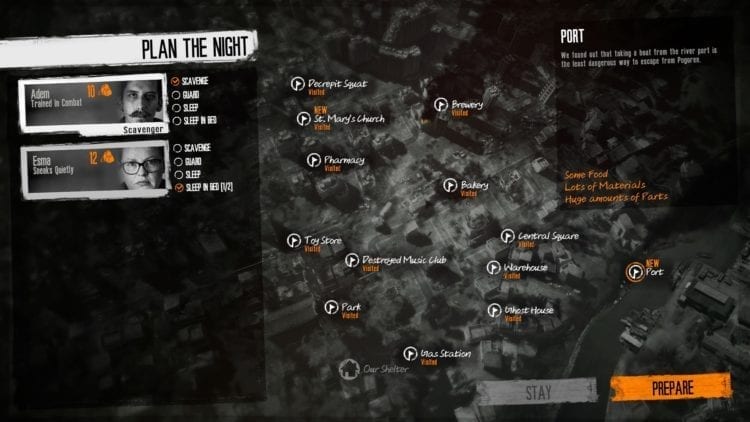 Pogoren’s locations for Esma the Explorer.

Since Esma is the only one who can take care of Malik, her survival is tantamount to finishing the game. Her death, at any point in time, causes Malik to lose the will to live and commit suicide leading to an instant “Game Over.” And so you’ll need to find bits of pieces of news from certain places or NPCs. Once you get back home, Malik can then broadcast the information to the public via his radio.

What’s odd is that even though this DLC focuses on radio broadcasts in war-torn Pogoren, it doesn’t have as many choices of news bits to broadcast compared to the base game. 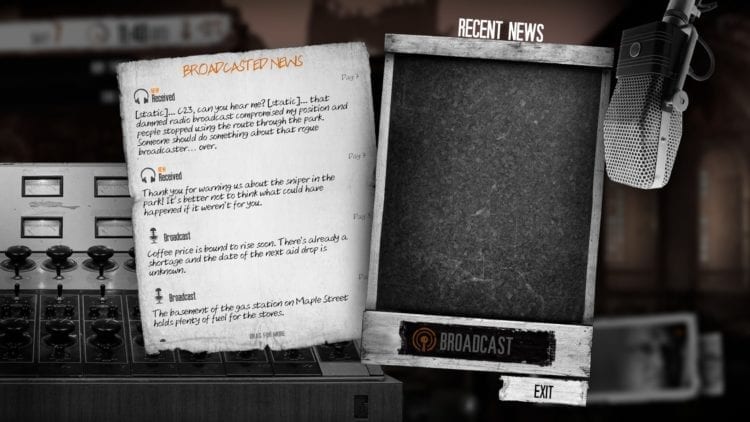 The First Casualty Of War Is Truth

There’s a saying that goes: “The first casualty of war is the truth.” This sentiment is actually central to The Last Broadcast’s story. That’s because Esma will encounter incidents which lead her to a dilemma. She can have Malik tell it like it is and earn the ire of the government’s military forces. Otherwise, she can obfuscate the truth to protect her husband from death squads. The choice is entirely up to you and some of these decisions will have major repercussions. Another, well, might just give you a piece of apple pie. 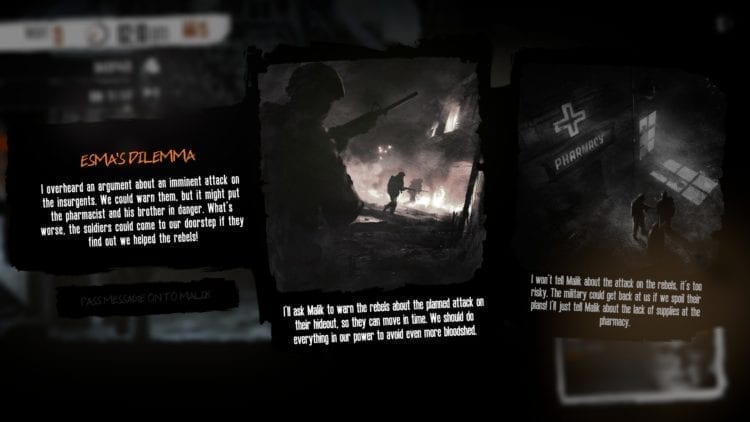 Put other people in danger, or put ourselves in danger? Hmmm…

All in all, what you find out in the game (and what you let the public find out) will determine one of several endings the game has. One such ending I encountered saw Malik’s gruesome execution by death squads.

Esma arrives home to find Malik’s dead body. Within that same day, their estranged son, Adem, also appears. Apparently, he deserted the army when he found out that they were coming for his parents but he was too late to warn them. I decided to have the mother and son duo escape by boat. 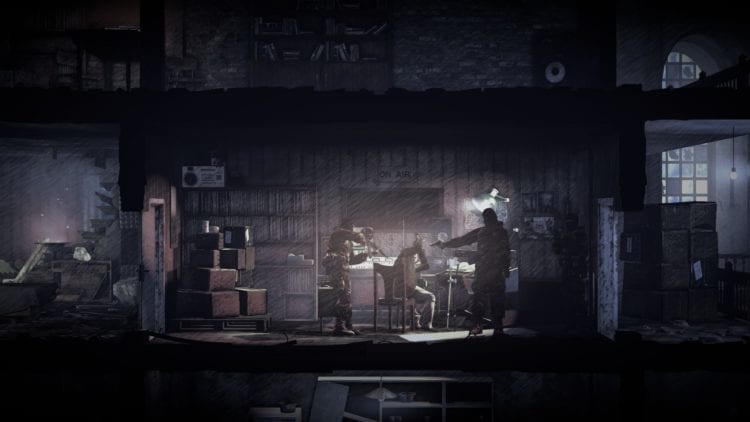 It made me wonder, given Malik’s sympathy to the rebels, where the hell were they for most of the latter stages of the game? That’s just one of the quibbles I have with The Last Broadcast.

While it’s true that the choices you make have a big impact on the ending you receive, most of the time you just feel like you’re going through the motions. The environments and setting remain just as bleak as the main game, but this feels more like going from objective A to objective B. I felt disconnected from the overall impact that This War of Mine’s base game has presented years ago since the main goals in The Last Broadcast are just to find that snippet of information, make a choice, and then see what happens next. 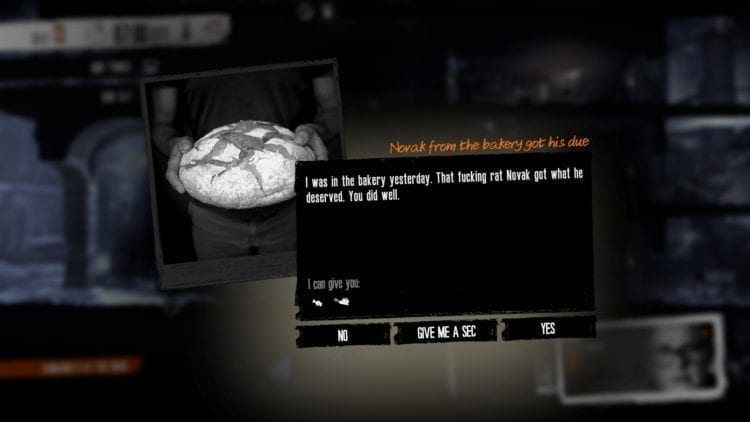 Out an informant, put his son in jeopardy = here’s a warm, homemade pie.

What’s worse is that if you do want to obtain another ending, you’ll have to start the episode anew, right from Day 1. The only save you can load is from the previous day assuming you had a game over moment. In fact, if by some reason you try to start a game of Father’s Promise, the game tells you it would overwrite your previous Last Broadcast save! It’s one of the strangest designs I’ve ever seen.

Since you’re only exploring as Esma — until Adem returns home around Day 15 which is around the time the game could end if you head to the port — you don’t really develop any connection to anyone. It’s a far cry from This War of Mine or even Father’s Promise where you feel a certain attachment to characters. 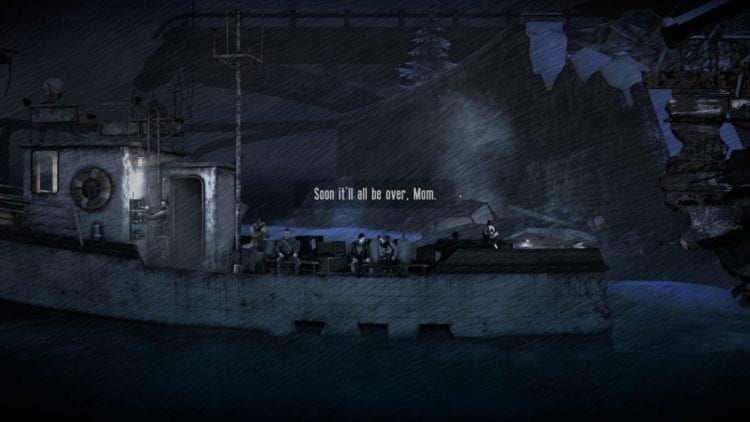 Yeah, the game was “already over” by the time you became a playable character.

Malik, in spite of his convictions, is just the guy who sits in front of the radio while Esma does everything. In fact, as Esma, I had to build a cooking stove in the room beside Malik’s just so he could cook something. I had to wonder why repairing the stairs or building a small ramp aren’t options despite having 100 wood panels available

Bad News for This War of Mine: The Last Broadcast?

The Last Broadcast isn’t a bad DLC per se. The locations — bombed-out buildings, run-down establishments, empty streets — all give you a foreboding sense of bleakness and dread. The art design is still just as good as it ever was since the base game released four years ago. You can still play it as skillfully and stealthily as possible, or you can go in guns blazing and crowbars swinging which is way more ill-advised. 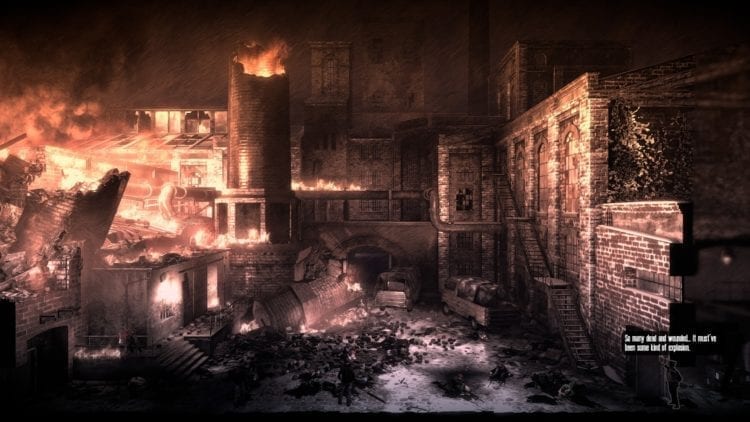 The brewery explosion. Tell the truth or cover it up?

The Last Broadcast also lets you experience the life of a journalist; one who can earn the contempt of a brutal regime. Sadly, most of the DLC’s “days” are spent with Malik sitting there waiting for nothing while Esma does repairs and crafting. Likewise, some of the DLC’s “nights” are spent with Esma scrounging around for supplies. All of these activities are just so you could find that next plot point.

It’s just a very restrictive and constrained experience compared to what This War of Mine — which I consider one of the best examples of a non-violent game that conveys the tragedies of war effectively — has provided years ago. It doesn’t even have the strong narrative that Father’s Promise has. Here’s to hoping that the third episodic story will provide something uniquely engaging and resonant.

This War Of Mine: The Last Broadcast

A constrained experience compared to what This War of Mine usually offers. The Last Broadcast tries to pull at the heartstrings, but you're mostly playing as Esma crafting or exploring, while your husband idly waits for something to happen.

By Jason Rodriguez40 mins ago
Reviews

By Kevin Foley2 hours ago
Reviews