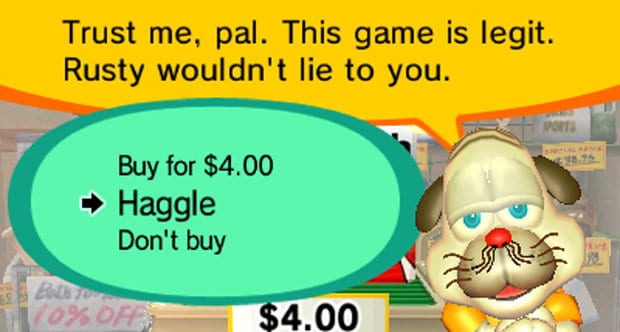 Nintendo is on top of the deals this week, but in a different way than you might think. If you have Dr. Mario on the Wii U, you can get Dr. Luigi for $ 5 off. More importantly, they are launching Rusty’s Real Deal Baseball for the 3DS, where you can haggle your way into getting the games for cheap yourself! Of course, like every free-to-play game out there, you start out for free.

Also new this week is Super Monkey Ball 3D on 3DS, Batman Origins: Blackgate Deluxe Edition on Wii U, and of course, the launch of GBA games on Wii U VC. Get the details here.

New on PSN are Mercenary Kings for PS4, Batman Origins: Blackgate Deluxe Edition  and BlazBlue: Chrono Phantasma for PS3, and MLB 14 The Show and Ragnarok Odyssey Ace for Vita (both also available on PS3). No IGC game this week, but there are sales for Amazing Spider-Man and Tom Clancy games. You can check it all out here.

This week Microsoft has sales for WWE 2K14 and Amazing Spider-Man, as well as their add ons. Check out all the details here.

It’s all Windows games this week. Get Extreme Treadmill Survival,  Potion Of Nag,  THE DISHWASHER, and Rainbow Bombs.

GOGcom has deals up for various Square Enix games, including Thief, Pandemonium, Deus Ex, and Legacy of Kain. I bet you haven’t heard about those for a while. Check them all out here.

This week’s indies have been artisanally handpicked by our colleagues over at gaming site Destructoid. Get Little Inferno, Super Hexagon, Natural Selection 2, Critter Crunch, PixelJunk Monsters Ultimate, and Hotline Miami. Go above $ 6 to also get their soundtracks. Check out the deals here.

Todays Steam deals see some returning games, so if you missed out on a good deal last time, now’s your chance. Get Early Access to Shadowrun Online and Kerbal Space Program. Also on sale are Monaco, Shelter, Sang-Froid, R.I.P.D. The Game, and Worms Reloaded. Check all of them out here.