Isn’t it amazing how easy it is for us mere humans to become attached to the ridiculous. We love crudely crafted porcelain ornaments, the idea that visitingFranceis somehow a good one and even cats. I mean come on, seriously? Cats? Dogs, yes, but cats? Ridiculous.

Thomas Was Alone plays on our susceptibility to find meaning and connection in anything and everything, succeeding in its attempt to make us care about a group of blocks. These blocks come in different colours, shapes and abilities, but at the end of the day they’re still blocks. No matter how diverse or fancy.

And yet, the way the story is told in this ingenious little platformer means it’s all but impossible not to see the blocks as anything other than fully rounded characters. It’s the ultimate evidence that the strongest narrative connections we can make are those that we project ourselves. They’re just blocks, but that’s why they’re so powerful. They don’t speak, they don’t talk and they don’t have defined facial features or reactions. Therefore what we think they are, is what they are… within the boundaries of the narration. 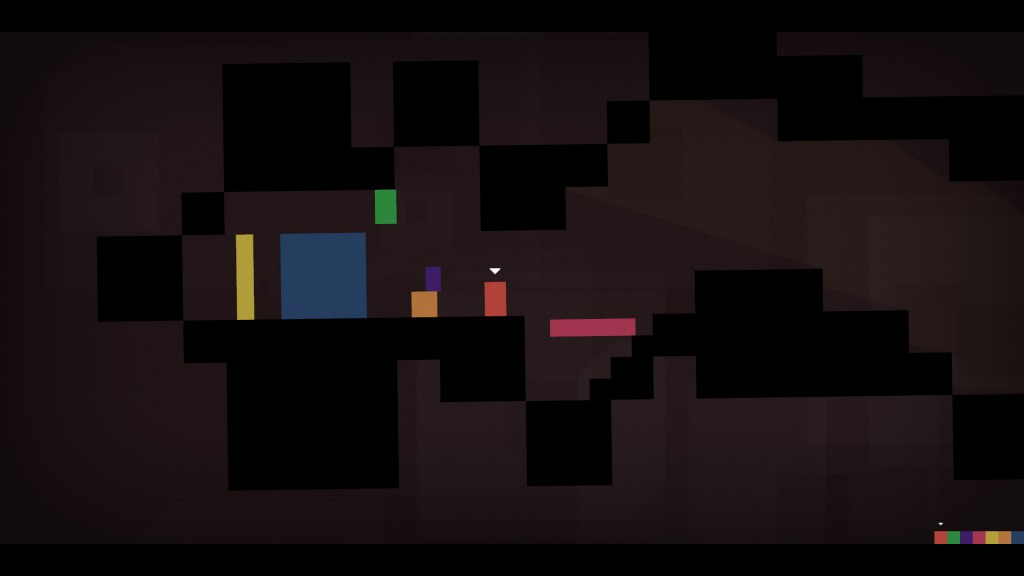 The narrator, Danny Wallace doing his very best to impersonate Stephen Merchant, weaves a story of friendship, love, jealousy, heroism and exploration. Each level is usually limited to a few lines, but those lines are written with poetic flow and beautifully convey just the right amount of personality and tone. Like all good narrative writing, the script elevates, rather than overshadows, the blocks characters.

Thomas’s story can be interpreted as a look back to the origin of games themselves. As you progress through its stages you’re introduced to new blocks and new obstacles, a nod towards the iterative nature of the game and its continued quest to provide the exact right mixture of tools, challenge and reward. It’s classic puzzle/platformer design; continue adding new elements that build upon the old. The same idea can be applied to the progression of gaming. Not just videogames, but also board, card and every other kind of game.

Puzzles are never too difficult, but they’re just challenging enough for you to give yourself a pat on the back and stand in appreciation at the intelligence of the design. In general you’ll know what needs to be done, it’s just a matter of implementation.

Aiding that are straightforward and responsive controls that give you complete confidence in your movements. Move left or right, jump and switch blocks are the only controls you have with which to coordinate your efforts, but it’s all you need. Some blocks have special abilities, such as being able to float or act as a trampoline, but unlike other platformers, the physical act of using the ability is not where the challenge rests; it’s in the thinking about how you use it.

You could argue that a stiffer challenge during Thomas’s final levels would provide a greater sense of player accomplishment, but my feeling is that this would have detracted from the characterisation and narration. Thomas is a game about the combination of gameplay and emotion first, challenge second. The game can be interpreted as a look at the evolution of games, but it doesn’t always necessarily follow games’ rules.

Where it does follow rules is in the visuals. Exclusively muted tones, straight lines and trusty 90 degree angles, the aesthetic is one of melancholic formalism. The style plays brilliantly off the characterisation as, like the blocks themselves, the levels are striking but not overpowering; impressive, not obtrusive.

In a sea of indie platformers, Thomas Was Alone stands high on the crest of the wave. It’s cohesive, engaging, smart and a fine example of how so little can say so much. Look at me, I’m attached. Ridiculous.

Thomas is no longer alone, I suppose.

PS3 3D Display: Is It Worth Your Time?

By Michael Feghali19 hours ago
Reviews