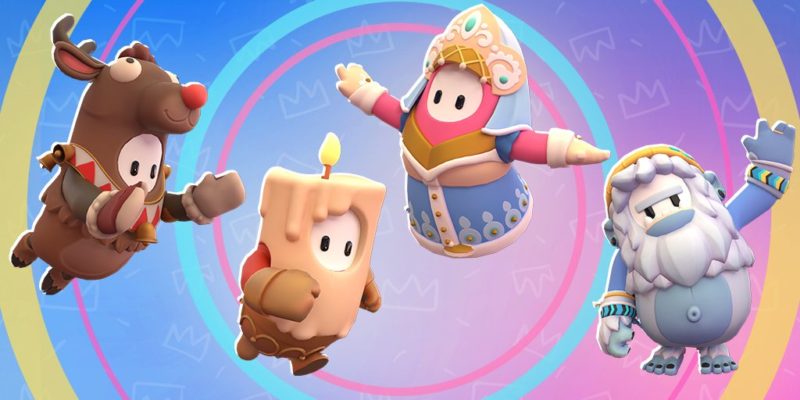 Ahhh, Fall Guys, you’re the gift that keeps on giving. Just when it seems like you’re out of ideas there’s a new content update. When it seems like you’re done being wacky, there’s a new post on Twitter that totally changes that. And when it doesn’t seem like there’s any new way to dress up one of the game’s wonderful bean boys, well, you constantly outperform. Another batch of holiday-themed costumes have been revealed for Fall Guys, and they’ll be available along with the start of the game’s third season.

Announced on the game’s Twitter page, as most things Fall Guys are, the new costumes are as adorable as any others. They pack the guys into reindeer, yeti, and snow princess costumes, all of which will look fantastic flailing around while trying to stay out of slime or struggling to clamber up walls and fall mountains. The other costume, a small lit candle, was revealed just a couple of days ago, on December 5.

The third season of Fall Guys is going to be completely winter themed, and there’s more content coming than just some cute, nifty costumes. Each seasonal update for Fall Guys has come with more levels to play through, customization options and general quality of life improvements. So far, there’s no reason why the game’s third season would be any different.

News on what new content will be heading to Fall Guys will arrive sooner rather than later. As in much sooner. December 10 sooner. The game will have a small presentation at this year’s Game Awards show centered around new content coming in its next season. As for when the third season of Fall Guys will actually begin, that’s up to speculation. However, with the winter theme and the fact that it is already a week into December, the next season of Fall Guys will likely launch sometime this month.

Where the hell is our Cyberpunk 2077 review?