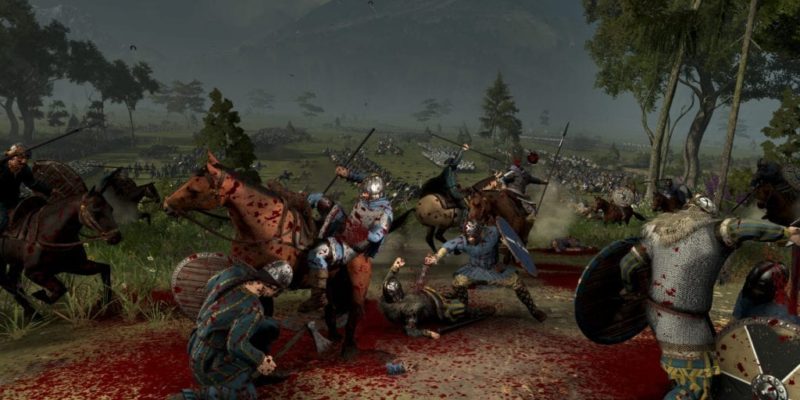 Last time we looked into Total War Saga: Thrones of Britannia, we learned a lot from an interview with game director Jack Lusted which was conducted by Total War player Cody Banks. Lusted mentioned the challenges that the game had faced as well as their design philosophy. He also mentioned upcoming changes that Creative Assembly hopes would improve the game. Today brings those new changes in store with the Allegiance Update and the Blood DLC. Check out the trailer below.

Update: (10 a.m. EST) Both content packs were supposed to be released at 10 a.m. EST/3 p.m. BST. However, Creative Assembly mentioned that there were some issues on Steam’s side which they are working to resolve.

(10:35 a.m. EST) The issues have been resolved and both the Allegiance Update and Blood, Sweat, and Spears can now be downloaded via Steam.

Thrones of Britannia: The Allegiance Update

The Allegiance Update for Thrones of Britannia adds additional layers and depth to the first Total War Saga title. When Thrones of Britannia initially launched, the simplicity and streamlined mechanics were notably criticized by the community leading to some tweaks from Creative Assembly.

Estates are essentially landed titles for your characters. Generally speaking, all characters in the game would want to have more titles as that means more lands. However, certain traits and actions influence which types of estates characters would prefer over others.

These are similar to Rites from Total War: Warhammer 2. Decrees confer massive bonuses to your faction at the cost of a hefty sum of gold. Some will also require you to first unlock certain buildings. For instance, in the video, we can see several decrees for the Viking Sea Kings factions. One such example, “Expedition Dispatched,” will allow your seafarers to reach further lands. However, this requires owning the highest level of a Viking Port and 2,500 gold to enact.

Allegiance is dependent on your leader’s influence. events, and certain buildings. This changes in various settlements depending on how strong your influence is against your rivals. Should you fail to properly manage this mechanic, Usurper Allegiance comes into play wherein there is a stronger support for competitors or for civil war.

Vikings followed the Norse Pagan religion while they sailed all around Europe. In certain cases, many chieftains converted to Christianity when they discovered British lands. In the game, the more you capture territories with churches and monasteries, you’ll get an event which comes with three decisions. You can either “Remain Pagan,” “Convert” on your own, or “Order Mass Conversion” for your entire force. Each decision comes with their respective boons and challenges.

Building chains for your settlements now branch out at level four, and several new building options have been added. The Allegiance Update will also contain several bug fixes and UI improvements for the game.

The Allegiance Update will be free to download for all Total War Saga: Thrones of Britannia players. Check out the full patch notes here.

We’d also like to mention that the Blood DLC — a regular offering for many recent Total War titles — is also available. Known as Blood, Sweat, and Spears, the DLC will be adding new killing animations and gorier deaths. We’ll see bloody decapitations and even disembowelment during battles. Check out the trailer above for some good, old-fashioned Dark Ages violence.

While the Blood, Sweat, and Spears will be paid content for a small price, it will be free for those who already own the Blood & Burning Pack for Total War: Atilla.

You can check out Total War Saga: Thrones of Britannia on Steam here.